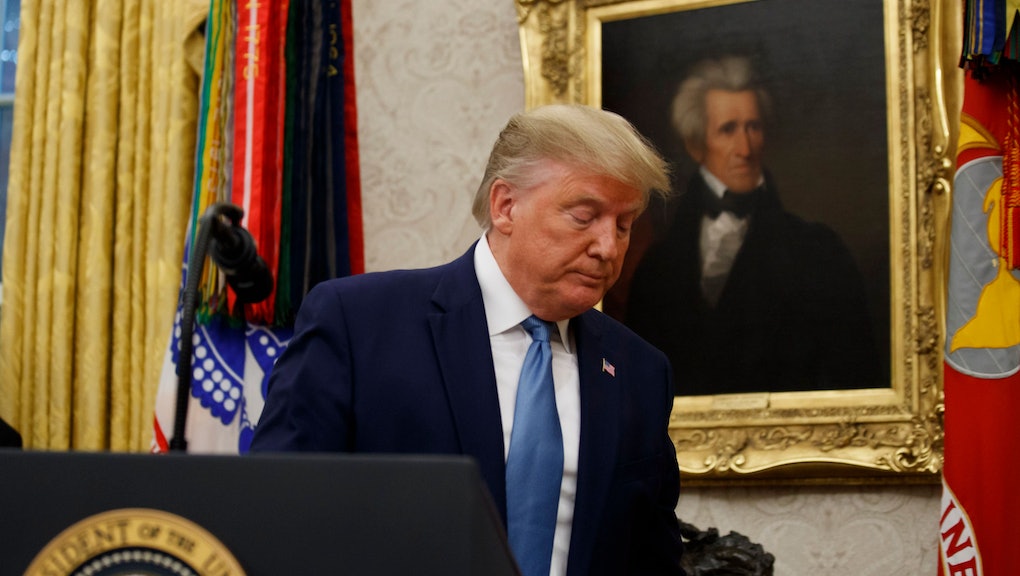 Donald Trump grabbed a woman’s vagina, pulled her behind a tapestry, and forcibly kissed her. Then he asked her to stand by his side and smile while he greeted guests out the door at his Mar-a-Lago club. That’s one of the allegations leveled in All The President’s Women, a book by journalists Barry Levine and Monique El-Faizy that uncovers what they say are more than 43 new allegations of misconduct against the president.

In an excerpt published Wednesday in Esquire, Levine and El-Faizy tell the story of Karen Johnson, who encountered President Trump at a New Year’s Eve party at Mar-a-Lago in the early 2000s. She was at the party with her ailing husband and another relative; shortly after midnight, her husband wanted to go home, Johnson told the reporters, so Johnson walked to the bathroom before they left.

Johnson had met Trump a few years prior at her wedding reception, which was held at the Florida property, but otherwise she didn’t know him well. “I hadn’t seen [Trump] that whole entire night,” Johnson told the reporters. “I was just walking to the bathroom. I was grabbed and pulled behind a tapestry, and it was him. And I’m a tall girl and I had 6-inch heels on, and I still remember looking up at him. And he’s strong, and he just kissed me.”

She continued: “I was so scared because of who he was ... I don’t even know where it came from. I didn’t have a say in the matter.” The reporters spoke with a friend of Johnson’s, who said Johnson told her about the incident years before Trump ran for president.

Johnson said the encounter with Trump was “traumatizing,” and one thing in particular haunted her when her alleged attacker ran for president a decade later: the Access Hollywood tape.

Johnson’s story comes only a few months after a rape allegation by the gossip columnist E. Jean Carroll appeared on the cover of New York. Though Carroll’s story caused a brief uproar when it was published, it quickly fell out of the news cycle — just like the dozens of other stories women have told about misconduct at the hands of the president.

In all, Trump has been credibly accused of sexual assault of 24 women, not counting the 43 new allegations that Levine and El-Faizy say they have uncovered. Before the man was elected president, nearly 20 women had credibly accused him of misconduct.

So yes, the allegations Levine and El-Faizy say they’ve uncovered are startling. Johnson describes a sudden, intense, and intimate violation; Carroll’s account was sickening and profoundly courageous in her description of its lasting effects. Every single one of these women are brave for coming forward with their stories, and every day that another person joins their number it’s a reminder of the man we’ve chosen to occupy the Oval Office.

But an obvious question arises every time: When is anybody going to do something about this?

Many people with power and platforms could make substantial changes. For example, should the media start referring to Trump with the descriptor “credibly accused rapist” as a matter of course? After all, it’s not like you would read a story in 2019 about Louis C.K., Bill Cosby, or Harvey Weinstein that doesn’t mention the sexual assault accusations against them.

And perhaps more pressingly: What are Democrats planning to do about all of this? Republicans have long signaled that they consider rape allegations against the president to be a non-issue, even though they impeached Bill Clinton over a consensual affair. Democrats spent the first two years of Trump’s presidency dreaming about winning a majority in Congress, and now they have it in the House. Will they finally be moved to take a stand on Trump’s sexual assault accusations? Will they be adding these claims to their articles of impeachment? Will they be inviting his accusers to testify before the House? Will any representatives even mention the shocking reports on the House floor? Will anything beyond sustained outcry from swing-district constituents spark action?

If not, then our elected officials are reneging on their duties. They need to transform the issue of alleged horrific criminal misconduct by the chief executive into something beyond just a Twitter talking point. People have often pointed out how surprisingly little traction Trump’s accusers have gotten. But traction doesn’t come from nothing. If the House can’t investigate dozens of credible sexual assault accusations against a sitting president, then what is it good for?