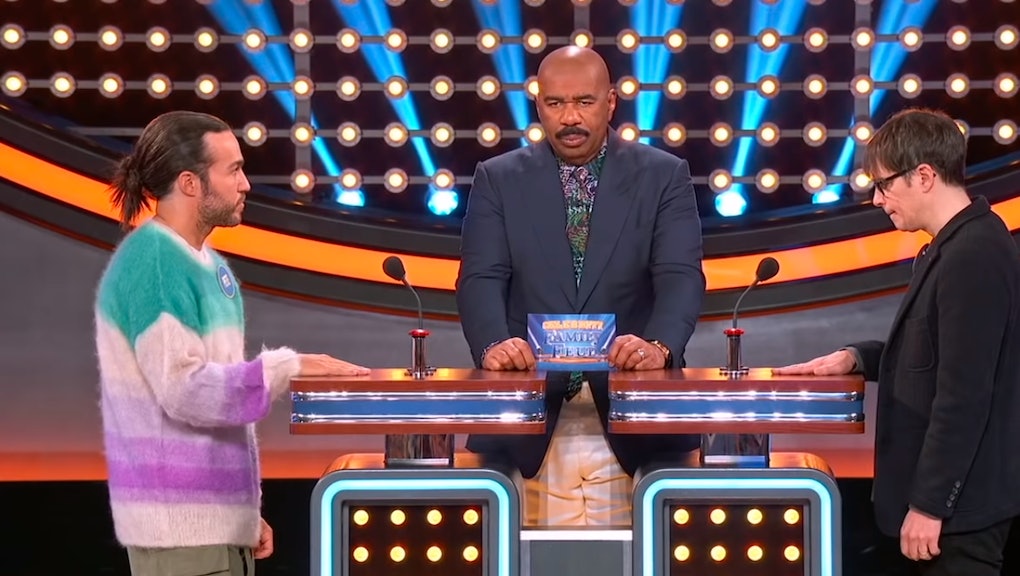 Keep the celebrities away from game shows!

If you were one of the 6.1 million people who tuned into the least-watched Emmys ever, you might reasonably deduce that game shows are back. Not that they went anywhere — they’ve been a comfortable fixture in ABC’s summer lineup for the past few years — but this really had a now more than ever feeling to it. Inundated with ads for programs like the primetime revival of Who Wants to Be a Millionaire, Supermarket Sweep, and a pre-Emmys episode of Celebrity Family Feud featuring Fall Out Boy and Weezer, you couldn’t get away from it. As a game show fanatic, this is fine, but it reopened one of my most long-held television takes: keep the celebrities away from game shows!

For the sake of this exercise, we’ll broadly define “celebrities” as anyone independently famous outside of their TV hosting duties. (Some of the career MCs, like Jimmy Kimmel and Jerry Springer, are still technically celebrities. They can stay.) While the game show has become infinitely more extreme and reality-adjacent than in decades past, any competition series with some sort of one-off structure qualifies. When the two have intersected in the past — think Match Game, Hollywood Squares, and most iterations of Password — it results in eminently skippable TV. Now that’s all we have.

Although it isn’t the only offender in the space, ABC’s Summer Fun and Games slate will carry on in some form into the fall, with the Leslie Jones-hosted Supermarket Sweep and the Kimmel-hosted revival of Millionaire, which features existing millionaires as contestants. Some of these shows hosted by celebrities — Sweep, Alec Baldwin’s Match Game, Elizabeth Banks’ Press Your Luck, Adam Scott’s Don’t, Anthony Anderson’s To Tell the Truth, good lord — allow average joes to compete for that heavily taxed prize money. As it should be, and some of these hosts are marginal enough stars to not suck all the air out of the room.

The worst example of the genre — celebrities as the only contestants, with proceeds usually going to charity — is the least watchable, even if a good cause might benefit. Family Feud is an absurd enough concept on its face that this almost works, since there’s no discernible talent required to play. It was even mildly amusing to watch someone like Hannibal Buress attempt to work his way to seven digits on Millionaire, but the urgency is missing. For this same reason, the celebrity episodes of Chopped for charity are always the least interesting — no one doesn’t want to win a heap of money for the charity of their choosing, but a professional chef appearing on TV for what could be the only time presents life-changing stakes.

A clear outgrowth of Carpool Karaoke, Lip Sync Battle, and watching Jimmy Fallon play tic tac toe with, like, Donald Rumsfeld, the current game show dependence on celebrity tracks with every development of the past decade. It’s an ostensibly winning bet that people would rather watch someone with some level of familiarity than just another guy. Now that fame has engulfed everything, there’s a much clearer and slightly more accessible route to renewed attention and engagement than the audition process for a game show, and thereby so many other places to be entertained outside of network TV.

But I don’t necessarily buy that it’s game over for regular people on game shows. Just before the pandemic, the Jeopardy! Greatest of All Time tournament yielded record ratings from three guys who became household names by way of their game show appearances. One of the summer’s most maddening and bingeable new shows came in the form of Netflix’s Floor Is Lava. Hosted by Top Gear’s Rutledge Wood, who mostly appears off-camera with infinite variations on well, THAT just happened commentary for much of the show, Lava gets by on its dubiously categorized normal contestants. Nevermind that many of them are contemptible, sentient Chuck Norris jokes — that’s kind of the fun of it all. Arriving at the midpoint between American Ninja Warrior and Wipeout, it prides itself on tossing unprepared and overconfident people into the piping hot lava.

There’s still an appealing alchemy to be found in slotting normal people into a high-stakes environment on national television. The most memorable game show moment of the last 20 or so years certainly didn’t come from ABC’s celebrity lineup, but from their big hit at the turn of the millennium. When John Carpenter became the first million-dollar winner on the original Millionaire — using his only lifeline to tell his father he was about to win — he immediately entered the game show god tier. Even if he parlayed his win into a few seconds of fame and a comfortable, unremarkable life, he proves the currency of what can happen when you command an audience to invest their time into a compelling half hour of television with someone they may never see again.

More like this
8 shows like 'Ted Lasso' to watch if you need more feel-good TV
By Brandon Yu
‘Sexy Beasts’ is a cringey reminder that love is not blind
By Chloe Stillwell
Can TikTok's new résumé feature really help you find a job?
By Tracey Anne Duncan
Stay up to date