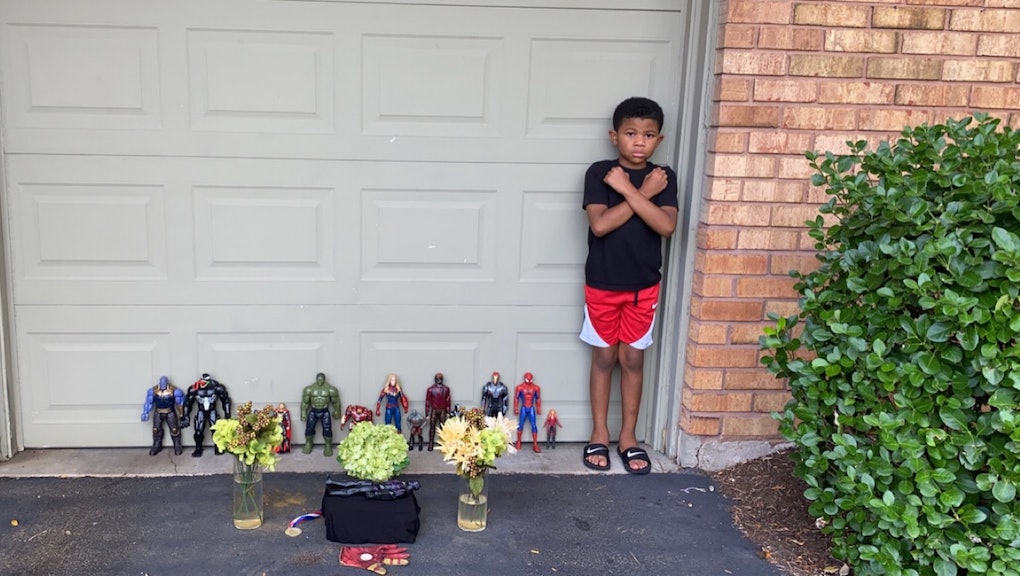 Chadwick Boseman’s untimely death from colon cancer at age 43 is an unfathomable loss. Beyond portraying Black Panther, protector of utopian Wakanda in the Marvel Cinematic Universe, the gifted actor was a real-life hero to many who saw themselves reflected in his performances on screen. Since the tragic news broke last Friday, children everywhere have been mourning Boseman with action figure funerals for Black Panther. Though the toy tributes have become somewhat of a trend on social media, parents say their kids staged the memorials spontaneously.

The first image of a kid-led vigil to go viral and tug on everyone’s heartstrings was of 7-year-old Kian Westbrook, whose Black Panther toy rests on a black plinth surrounded by flowers. His other Avengers action figures stand in solemn attendance, and Kian holds a “Wakanda Forever” pose. His dad, King Westbrook, explained Boseman’s significance to his son to Insider:

"Black Panther was important to him simply because Kian loved seeing a superhero hero that looked like him. He understands that Black Panther is a fictional hero, but he made Kian believe a Black boy could grow up and be a strong Black superhero. When he found out about Chadwick's passing, he was devastated. I'm not saying that lightly. Chadwick was his hero, and he felt like he lost a strong Black superhero. [...] Kian did the memorial because he wanted to honor Black Panther. He wanted to do a memorial similar to the one Iron Man received in Avengers: Endgame after he died. That's why the other Avengers are there too."

Boseman’s illness was a shock to fans and colleagues alike. The late actor never publicly revealed his battle with colon cancer, going on to film several more movies, including Black Panther, after his stage 3 diagnosis in 2016. Boseman also endured speculation about his weight loss in recent years. His private battle with the disease reveals an even deeper well of courage than his fans had previously appreciated.

Boseman’s heroism certainly isn’t lost on his young fans, whose performances of their grief mirror the abject sadness and confusion we adults also feel in the wake of his passing. There’s no lesson or silver lining: cancer is a cruel and awful malice. But there is hope, in all the young minds Boseman inspired through his art.