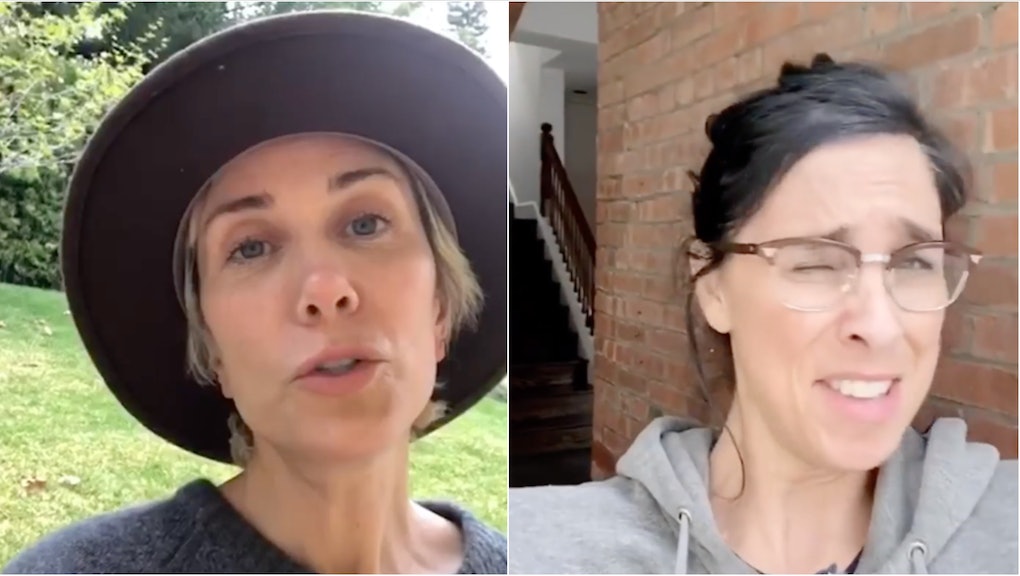 Now that we’re something like eight months into the pandemic, I suppose we ought to thank Gal Gadot for orchestrating that poorly-thought-out “Imagine” video starring all her famous friends. Honestly, I can’t think of another pop culture happening that so effectively united the people of America — against it. Folks uniformly hated it and for good reason. A bunch of rich and famous types singing lyrics like “Imagine no possessions / I wonder if you can” while regular people struggled to make ends meet in the face of a crippling health crisis? Yeah, I’d call that tone deaf.

Well, during an interview on Andy Cohen's Sirius XM talk show the other day, comedian Sarah Silverman admitted that she knew the “Imagine” stunt was doomed from the jump… but she decided to participate anyway, all because Kristen Wiig asked her to. “Kristen Wiig is the shit, you know, but she emailed me and she goes, ‘Well, we’re all gonna sing ‘Imagine,’” Silverman told Cohen on Monday. “I wrote her back and I go, ‘Imagine,’ really?’ And then I go, ‘Is it for a thing? What’s the call to action?’ And she’s so sweet, you know? I mean, she’s so funny. She's also so sweet. And she goes, ‘It's just to, like, cheer people up.’” Wiig got one thing right: making fun of a bunch of out-of-touch celebrities sure cheered me up at the start of quarantine.

Silverman told Cohen she couldn’t think of a plausible reason to get out of doing the video. "And then I couldn't say no, because one, it was the beginning of quarantine. Like, there's no saying 'no' to anyone because you can't. There’s no excuse for it,” the comedian said. Silverman noted that since she couldn’t ditch, she at least tried to make her verse funny.

But the best part of this story is that after the “Imagine” video went viral for all the worst reasons, Wiig apologized to Silverman for roping her into it. "It's funny because she emailed me after and she was like, ‘I'm so sorry,'" Silverman said. "It was well-intentioned, but like, yeah, a little tone-deaf. It really came from a nice place I think." Cohen also asked Silverman if she was at all surprised by the blowback to the clip, to which she simply replied, “No.”

For what it’s worth, Gadot recently reflected on the fate of her “Imagine” video during an interview with Vanity Fair, and the actress admitted that, in hindsight, it probably wasn’t the most empathetic idea. She defended her “good and pure” intentions, however. “Sometimes, you know, you try and do a good deed and it’s just not the right good deed. I had nothing but good intentions, and it came from the best place. I just wanted to send light and love to the world,” Gadot said. I’d argue the Wonder Woman actress succeeded in that respect — just maybe not in the way she originally intended. But hey, that’s show business, kids!