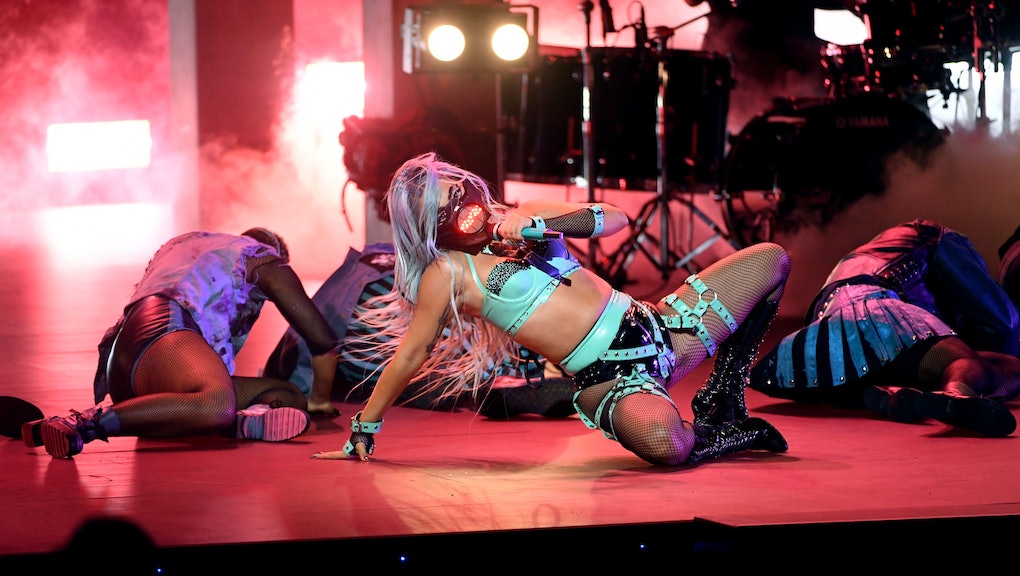 What is time, anymore? If the 2020 VMAs staged high-octane outdoor concerts in New York City last night and nobody heard the fireworks, was it even live? Luckily, nobody really cares about the production logistics of the VMAs, because Lady Gaga and her high-fashion masks stole the show. Each time the pop star emerged on MTV’s digital roofscape stage to collect a Moon Person last night, she looked like a glamorous monster, clad in a different couture ensemble and matching face mask.

Just like her high-camp arrival on the red carpet at the 2019 Met Gala, Gaga used fashion as a conduit for performance. She’s treated MTV’s loose-and-casual awards show as her personal runway before: this was the tenth anniversary of Gaga’s infamous meat dress, made of raw beef, which she wore to the 2010 VMAs in protest of the military’s “don’t ask, don’t tell” policy. The next year, she performed in drag as her alter ego, Jo Calderone.

At the 2020 VMAs, Gaga also used her clothes, specifically her fantastical facewear, to send a message about public health and safety. She swept onto the scaled-back red carpet wearing a silver Area coat and matching clear astronaut helmet by Conrad by Conrad which doubled as a face shield. Gaga collected her first Moon Person, for artist of the year, looking like an alien organism in an Iris Van Herpen dress and pink Cecilio Castrillo mask that clung to her head like a spider. Winning song of the year for “Rain On Me,” her collab with Ariana Grande, Gaga donned an emerald green Christopher John Rogers gown and a contrasting tusked Lance V. Moore mask. She looked like a “superglamorous mastodon,” the New York Times noted.

Performing her medley from Chromatica, Gaga wore a robotic ventilator mask designed by Diego Montoya, with LEDs that pulsed emulating soundwaves. (Grande joined her onstage for “Rain On Me” in a more subdued black satin face mask.) For her final looks of the night, Gaga wore a feathered Valentino cape, sparkling bodysuit and chainmail Maison Met mask. She swapped the Valentino for a mylar-esque cape by Candice Cuoco for her last onstage appearance. And then Gaga delivered her thesis statement: “I might sound like a broken record, but wear a mask. It’s a sign of respect,” she declared at the end of the VMAs.

It’s an interesting sign of our times that masking up became the de facto theme of the VMAs. Keke Palmer was an effervescent host, making the most of her weird semi-real and semi-virtual domain. She gracefully addressed the somber news of the week: Chadwick Boseman’s death and the police shooting of Jacob Blake. Palmer even performed last night! Or was that really Thursday? It doesn’t really matter. The VMAs were a peek at what’s to come from awards season this fall and winter. We’ll probably see lots more semi-live virtual events and, unless covid-19 is suddenly eradicated, lots more fashion face masks.