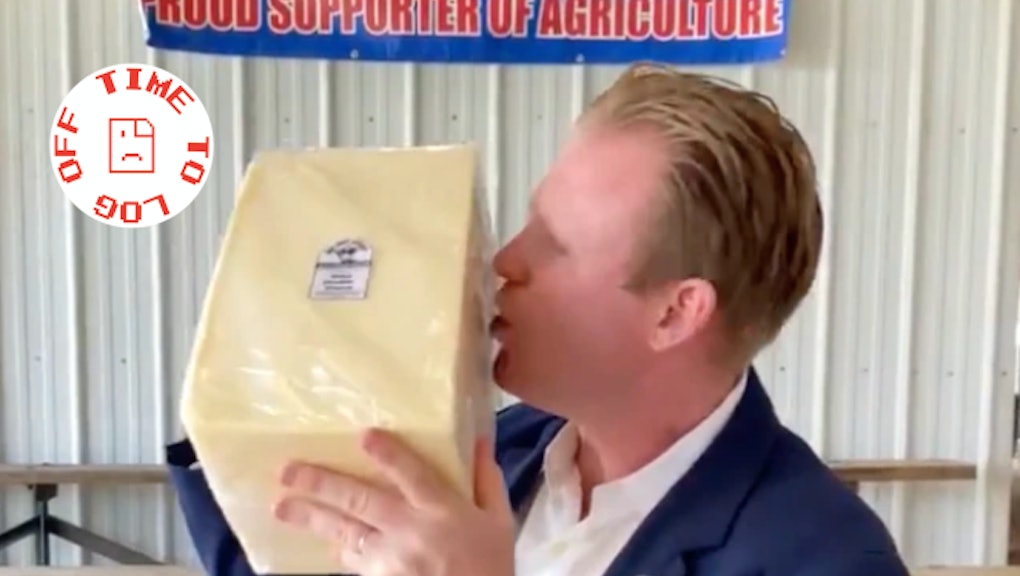 I'm not sure who first came up with the idiom "like father, like son," but rarely have I seen it applied more aptly than to Andrew Giuliani, the sweaty, shouting son of former New York City mayor-turned-farting trainwreck Rudy Giuliani.

Andrew — who, unlike his father, actually managed to get an official job in former President Donald Trump's administration — has been criss-crossing New York State lately, theoretically as part of his campaign to unseat current Democratic Gov. Andrew Cuomo but also apparently in a quest to find empty industrial complex parking lots from which he can shout at a poorly positioned iPhone. Most recently however, the younger Giuliani was whoopin' it up in Lowville, New York, (population 3,400) for the Lewis County Fair. Wheee!

Giuliani even made some videos to show what a great time he's been having. Topics include the time when he and his fellow fiscal conservative Republicans bought a block of cheese the size of a small goose, or possibly a large baby.

Please join me in congratulating this ruddy man on his lily-white dairy purchase. Look how much he loves this cheese (parents, please cover your children's eyes)!

Oh, and then he tried to make a joke about how he had the cheese's consent, but the whole metaphor got bungled when he claimed the cheese "refused to take a picture with a shirt that had the name Cuomo on it ... just sayin'!" even though the shirt in question was clearly an anti-Cuomo piece of clothing. It's okay, Andrew. Ascribing motives to dairy products can be tricky. You'll get it next time!

Another thing Giuliani has been doing at the fair is looking at exactly two (2) medium-sized cows and thinking, "How can I make a hilarious joke about these not-too-big heads of cattle?" He apparently decided to do so, by, uh, referencing perhaps the single most cursed strip of Manhattan — a place in which no self respecting New Yorker would voluntarily step.

"We're in the midst of a traffic jam right now," Giuliani explained. (Again, there are exactly two cows visible, both standing relatively still, with about 8 feet of open space between the pair.) "A little different than what you'd see in Times Square."

Ha ha ha! Because Times Square is a crowded hell hole, you see, while he's just standing in the middle of some cows. Incisive comedy! What a wit!

Ostensibly, this video is Giuliani's attempt at New York State cheerleading, and he gives it an admirable shot, encouraging New Yorkers to spend their money, uh, in New York, with its "62 counties ... so much diversity." It's at this point in the video that Andrew senses he's lost the plot a bit, and so he ends on a strong note, emphatically urging viewers to "come to New York," which seems kind of unnecessary since he explicitly addresses this video to his "fellow New Yorkers" in the opening seconds.

I honestly couldn't tell you if Andrew Giuliani is going to become the next governor of New York. My gut says no, but honestly, anything is possible. Still, if he does end up the chief executive in one of the most populous states in the country, I think we can all agree that these tweets — the cheese! The cows! The cheese again! — are what put him over the edge. Rudy must be so proud.

More like this
Ben and Jerry's won't sell ice cream in occupied Palestinian territories
By AJ Dellinger
More than 200 GOP lawmakers asked the Supreme Court to overturn Roe v. Wade
By Rafi Schwartz
Republicans are in an excellent position to weasel their way back to House control
By AJ Dellinger
Stay up to date