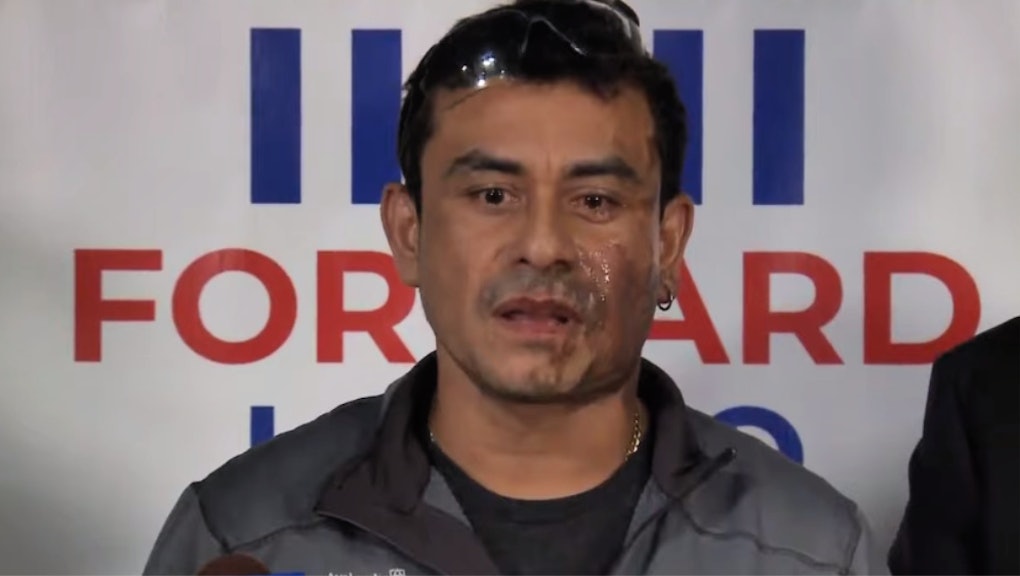 Milwaukee police have arrested a suspect following an acid attack on a Latino man outside of a Mexican restaurant. Mahud Villalaz was assaulted in the city's Lincoln Village neighborhood Friday, according to The New York Times. Villalaz said he was attacked by an older white man who was upset over how close Villalaz had parked to a bus stop. Villalaz moved his pickup truck, but the man was apparently still upset, and the resulting confrontation ended with the man throwing what is suspected to be battery acid in Villalaz's face.

"Because I was parked wrong. I'm going to my truck, and I move it half a block there. Then I get out to go come to the restaurant, and the guy's still there with a bottle in his hands," Villalaz told local ABC affiliate WISN about how the altercation began. Authorities arrested 61-year-old Clifton Blackwell on Saturday in connection with the attack, the Milwaukee Journal Sentinel reported.

Villalaz claimed Blackwell called him an "illegal" and made other racist and xenophobic comments, including telling Villalaz "you came here to invade" and "go back to your country." He told reporters that he believes Blackwell was upset because he told him, "This is my country. This isn't your country. Everybody came from somewhere else," during their argument. Villalaz said Blackwell asked him, "Why did you come here?"

The 42-year-old Villalaz emigrated to the U.S. from Peru 19 years ago and is an American citizen.

The altercation worsened and Blackwell threw what police believe is battery acid on Villalaz. The liquid hit the left side of Villalaz's face, resulting in second-degree burns. It also burned through his clothing.

"The feeling was burning, and I tried to defend myself, but I couldn't because I couldn't open my eyes," Villalaz recalled. He rushed to the restaurant's restroom and doused his face in water, and Blackwell fled the scene with the bottle. The entire attack was caught on a surveillance tape.

Milwaukee police had issued a preliminary charge of aggravated battery for Blackwell. He could be formally charged Tuesday.

"I believe [I] am a victim of a hate crime because [of] how he approached me telling me to 'get out of this country,'" Villalaz said. "This is pretty much a terrorist attack. I'm just glad he didn't have a gun and shoot me."

Villalaz is one of hundreds of people who have been told to "go back" to their country during a violent encounter with a white supremacist. Many of these individuals are in fact U.S. citizens — a fact that shouldn't matter, given the abhorrent nature of the crimes, but has proven inconsequential to even the president when he spews hateful rhetoric.

On Tuesday, HuffPost published an exploration in partnership with ProPublica's Documenting Hate database that found over 800 instances of an attacker using a variation of "go back" or "get out" while committing a hate crime. Twenty percent of the perpetrators mentioned President Trump during their attack. White people committed 90% of the crimes, and 75% of the attackers were men.