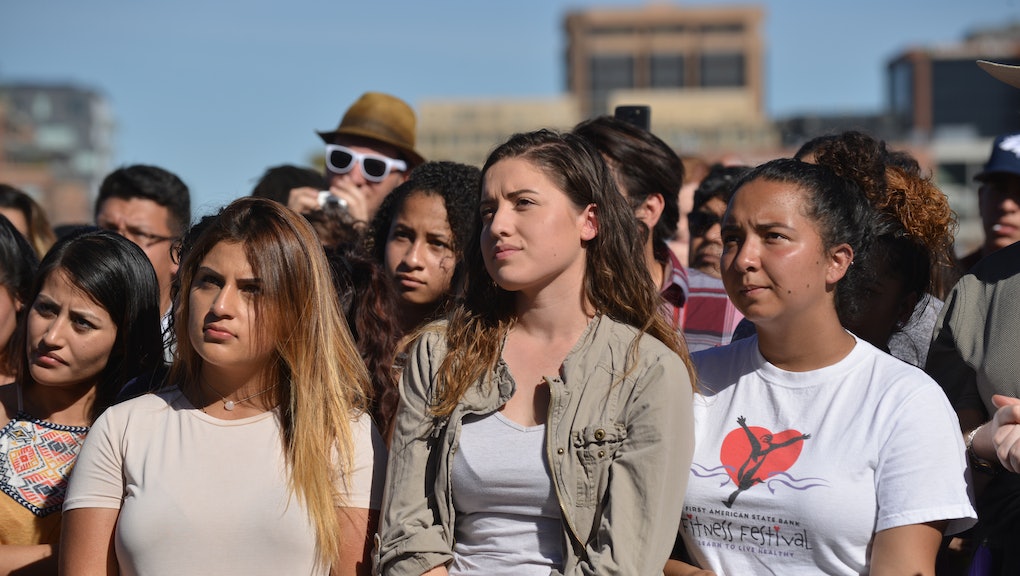 Latinx voters might be the most misunderstood demographic in the country

With the general election upon us, Democrats and Republicans alike are in the final stretch of campaigning. At this stage, campaigning is more about turnout than messaging; each party is working diligently to make sure that its most reliable voters actually cast their ballots this year. While many demographic groups clearly lean toward one party or the other, there's one group in particular that is less predictable and thus has the potential to determine races up and down the ballot: Latinx voters.

Latinx voters comprise the second largest racial and ethnic voting bloc. They tend to lean Democratic, but Democrats haven't worked hard enough for their votes, experts say, and there is a solid bloc of Latinos who vote red in the U.S. While much ink has been spilled about Black voters or women voters — two other core demographic groups for the Democratic Party — much less has been widely discussed about Latinx voters. Tuesday is an opportunity for the Latinx population in the U.S. to put themselves at the forefront of American politics.

Even the most well-financed campaigns don't seem to put in the work. As The New York Times pointed out, Democratic presidential candidate Joe Biden is slipping on winning over young Latino men who will likely vote for President Trump in part because the candidate simply has "not done enough to directly reach out to [them]." And as Jaime Regalado, an emeritus professor of political science at California State University, Los Angeles, wrote for The Guardian, "From the start of his campaign, Biden has mostly ignored Latino voters. ... He chose to focus his campaign efforts in battleground states on winning back white working-class voters who had supported [Barack] Obama but voted for Trump in 2016."

According to Pew Research, Latinx voters comprise the largest share of voters of color in the American electorate, making up about 13% of eligible voters. That's about 32 million people who waited this year to be courted by the Democratic Party. But despite their potential political influence, Latino voters were neglected, wrote Christian Paz in The Atlantic in September. "The disconnect many Latinos feel between elections and their own material conditions is partly the product of lax voter outreach and education from the major political parties," Paz wrote, but "they don't assign Democrats and Republicans equal blame. ... Democrats’ key problem is their outdated mode of thinking about Latino voters, viewing them as 'low-propensity' voters not worthy of major early investments in outreach."

As New Mexico Gov. Michelle Lujan Grisham (D) told Politico in August, "Most candidates have not really engaged the growing Hispanic communities and Latino communities across the country." It's a significant loss for Democrats specifically, because this growing base of voters could a major electoral asset, putting in play states that typically elect Republicans, like Florida, Arizona, North Carolina, Texas, and Georgia.

Political and grassroots organizations have been connecting with Latinx voters in these states, where the Latinx communities are growing yet still suffer from under representation. Given that candidates and campaigns aren't messaging to Latinx voters, organizations like the Progressive Turnout Project (PTP) have dedicated their efforts to reaching out directly to them and getting them to the polls. PTP recognized that Latinx voters were eager to make their voices heard, but didn't know how to gain a foothold in the political system.

Some estimates say that every 30 seconds, a Latinx person turns 18 and becomes able to cast a ballot — that's a lot of first-time voters.

"It's really exciting to be having these critical one-on-one conversations," says Stephanie Medina, the Latinx engagement coordinator for PTP. Medina tells Mic that the organization's field representatives have had 5.5 million phone calls with Latino and Latinx voters in 20 battleground states. In these calls, PTP tries to demystify the patchwork of voting rules across the country. Every state has different election laws on the books, including their own voter registration deadlines and specific rules about online registration or what kind of ID is needed in order to cast a ballot. The process can be difficult to navigate no matter what, but for first-time voters, first-generation voters, and voters for whom English is a second language, the whole process can disincentivize voting. Some estimates say that every 30 seconds, a Latinx person turns 18 and becomes able to cast a ballot — that's a lot of first-time voters.

One-on-one outreach is especially effective in times when assumptions about voters — what issues they care about or whom they plan to vote for — are applied broadly to ethnic and racial groups of Americans. The Democratic Party's neglect of Latinx and Hispanic voters is largely due to an assumption that they would be repelled by President Trump's racist, anti-immigrant rhetoric, as well as his abhorrent handling of the coronavirus pandemic, which has disproportionately harmed Latinx people. Yet 30% of Latinx and Hispanic voters plan to support the president in the general election and 40% identify as moderate, according to Voto Latino.

"It's very clear that Latino voters across the country are not a monolith," Medina says. Political analysts have long spoken about conservative Latinos in South Florida, predominantly Cuban immigrants who are soured on socialist policies because of what's happened in their home country. Mike Garcia, a Southern California congressional candidate, won his special election bid running on a pro-Trump platform.

Luis Sánchez, the executive director of Power California, which seeks to build political power to ensure that the state's representatives and institutions look like their constituents, is working to educate young voters of color about the voting process so that they'll be more inclined to participate. Sánchez tells Mic that over half of young voters aged 18-29, a growing number of whom are Latinx, don't feel confident walking into the ballot box. This isn't a coincidence, Sánchez says: "Most candidates don't spend their time and money focused on this population." That's why Power California has to work "double duty" to make sure young people vote and organize in their communities, he adds.

Power California is one of seven organizations mobilizing voters under the umbrella of California's Million Voters Project (MVP), which is working to fulfill the promise of its name: getting 1 million young voters of color to the polls. Election Day is a concrete opportunity to engage young people, nearly 70% percent of whom are not white and 50% of whom come from a family where at least one parent is an immigrant. But Amado Uno, director of the Million Voters Project, tells Mic that MVP and its affiliate organizations will continue to reach out to Latinx voters and young voters of color even after Election Day. "We are absolutely interested in winning elections," Uno says, "but we're also interested in building longer term power. ... That requires a much deeper investment."

This is why grassroots turnout organizations aren't just focused on mobilizing Latinx voters on Nov. 3. It's about generational change. If political parties, and the Democratic Party specifically, continue to take Latinx voters for granted, the reality is that they may be less inclined to participate in elections or vote for Democrats if they do arrive to the polls. That can lead to systemic disinvestment in Latinx families and communities for decades to come, Regalado said.

Latinx people have been made to suffer disproportionately from the coronavirus crisis, while working front line jobs for little pay. They've endured, yes, explicit racism from the current president, but so too have they suffered the implicit racism from Democrats in the party's assumption that Latinx voters all think or feel the same and aren't worthy of being asked for their vote. No candidate should expect to earn their vote without putting at least some work in — this year and beyond.

More like this
This poll shows just how strong Trump's hold on Republican voters is
By AJ Dellinger
Live from New York: Revisiting the totally bonkers era of post-9/11 'SNL'
By Rafi Schwartz
Oops, the Arizona recount the MAGA crew demanded actually took votes away from Trump
By Rafi Schwartz
Stay up to date