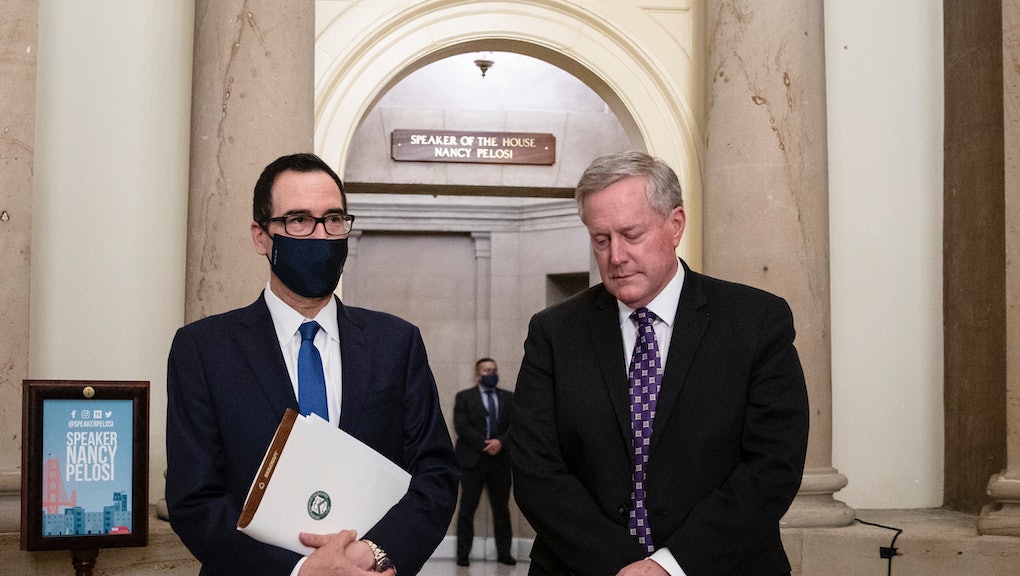 As millions of Americans stand on the precipice of homelessness, starvation, and financial ruin, lawmakers in Washington seem helplessly at odds over how to help their constituents during the ongoing coronavirus pandemic.

With the extended unemployment benefits now lapsed to the point of effective uselessness during the pandemic-induced economic spiral, negotiations between Democrat and Republican leaders appeared at an impasse on Friday, with House Speaker Nancy Pelosi accusing her counterparts of refusing to find middle ground during their ongoing conversations.

"They said absolutely not," Pelosi told reporters on Friday, after explaining that she had offered to knock $1 trillion off the Democrats' proposed HEROES Act, if Republicans would be willing to add an equal amount to their counteroffer, the HEALS Act. It's a compromise that would see an approximately $2 trillion price tag on second COVID relief package — roughly the same cost as its predecessor, March's CARES Act.

"We're not overplaying our hand when we are factually presenting what the needs are for our families, for our teachers, for our schools, for ending the virus," Pelosi added to MSNBC, echoing her earlier comments that "where we can't [find common ground] for our children, we must stand firm" in the negotiations.

Asked whether the Democrat's proposed trillion-dollar compromise is plausible, White House Chief of Staff Mark Meadows signaled just how far apart the two sides of the negotiations are, answering simply "I don't think so."

Among the many negotiation sticking points is a persistent effort by Republicans to slash the $600 unemployment insurance supplement created by the last COVID relief bill, which expired last month. Conservative lawmakers have claimed the $600 addition to existing unemployment insurance is a disincentive for people to return to work, despite economic experts largely disagreeing. Democrats, for their part, have refused to budge on previous amount, with Pelosi insisting that "we have said that we're going to have the $600, and they know that we want the $600."

President Donald Trump, meanwhile, has insisted he will issue an executive order to extend some form of COVID relief, widely expected to include some form of payroll tax cut — a favorite issue of his since early in the coronavirus pandemic — should lawmakers fail to reach an agreement by the weekend. The president has also signaled interest in extending eviction relief measures included in the CARES Act, which Democrats also have in their proposal for a second relief bill.

More like this
COVID vaccine holdouts have a message to lawmakers: Show me the money
By Rafi Schwartz
The real reasons employees aren't rushing back to work
By Noah Berlatsky
FEMA said it would reimburse cities for housing homeless people. Most cities ignored the offer
By AJ Dellinger
Stay up to date