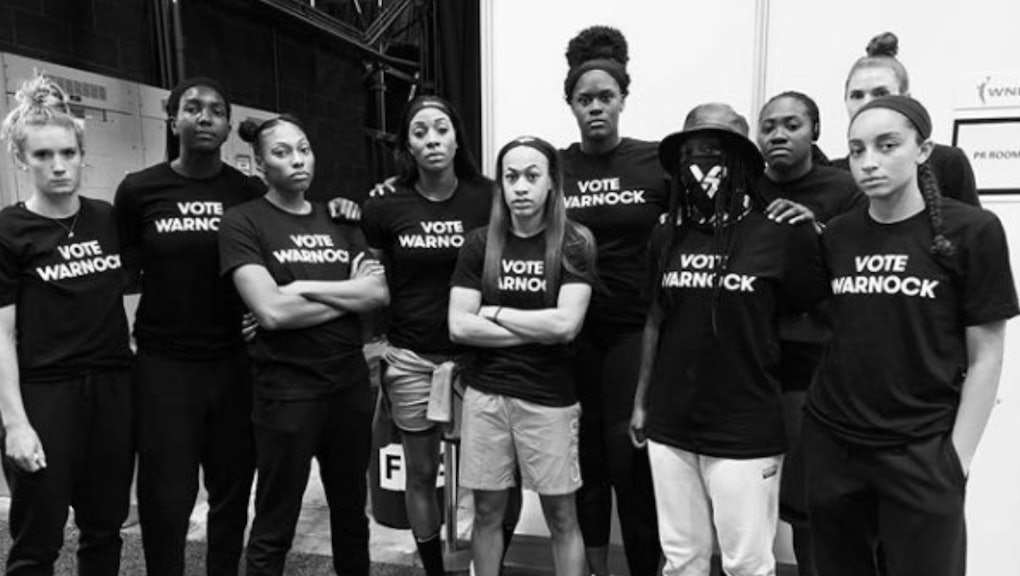 Even before the senate candidates in Georgia were forced into a high-stakes runoff election, players in the WNBA were vocal about their support for democratic candidate Dr. Raphael G. Warnock. The Atlanta Dream was especially open about their endorsement of the reverend, sporting “Vote Warnock” shirts last summer.

The public support was not only noteworthy because the American sports professionals had openly endorsed a candidate, but it was in direct opposition to his republican challenger Senator Kelly Loeffler, who just so happens to be a co-owner of the team.

The players decided to get political after Loeffler frequently disparaged the Black Lives Matter Movement, which was a primary focus of the WNBA’s 2020 season.

“When we realized what our owner was doing and how she was kind of using us and the Black Lives Matter movement for her political gain, we felt like we didn’t want to feel kind of lost as the pawns in this,” player Elizabeth Williams told the New York Times in August.

Last summer, the players union called for Loeffler, who purchased the team in 2011, to be ousted. WNBA Commissioner Cathy Engelbert said that wasn’t an option. But now, in light of Loeffler’s loss, LeBron James is suggesting that he is interested in buying the professional women's basketball team.

"Think I’m gone put together an ownership group for The Dream," James tweeted Tuesday. "Whose in?"

While James has been a vocal supporter of Black Lives Matter, WNBA players were the first athletes to publicly support the movement. Back in 2016, the Minnesota Lynx broke league rules by wearing warm-up shirts that read “Change Starts With Us: Justice & Accountability."

Support from WNBA players certainly played a role in bringing attention to Warnock, which lead to his victory.

“I think it was helpful,” he told USA Today in October. “It was one of the many turning points in the campaign. It gave people a chance to look a little closer and say, ‘Who is this Warnock guy and what is he about?’”

As the women's league continues to bring attention to issues that matter, it's only right that they have an owner that supports them. And after the team actively campaigned against Loeffler, we aren't sure why she'd want to stick around. Plus, it looks like James has garnered some interest.

More like this
The Olympics can't pretend athlete protests aren't happening
By Kara Weisenstein
No matter who wins, the Olympics host city always loses
By Amelia Merrill
The Norwegian women's handball team was fined for a sexist uniform rule that no one can explain
By Vanessa Taylor
Stay up to date