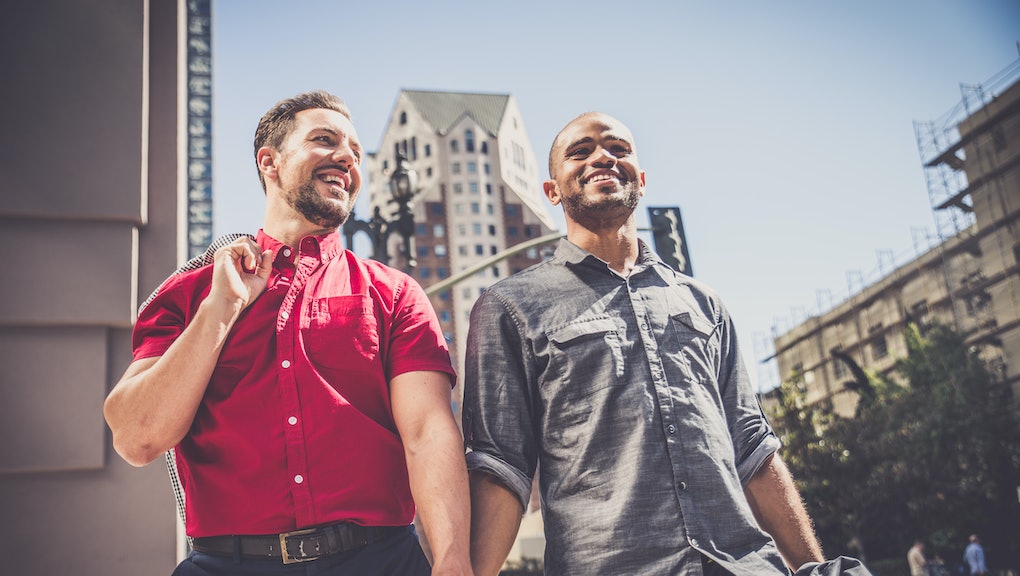 While many people would like nothing more than to spend their money at LGBTQ+-owned businesses, finding them can be a task, to say the least (just try Googling "Lesbian Chef-Owner Paris" and see how little info you actually get). It isn't for a lack of queer-owned companies around the country; it's due to the fact that there hasn't been a simple way to narrow down the list — until now. To kick off Pride Month this year, Yelp released data mapping LGBTQ+-friendly businesses across the U.S, so that people looking to buy from these companies can do so with far more ease.

To make the map, Yelp determined the 20 most inclusive cities in America, with San Francisco, Los Angeles, Portland, Seattle and Austin making the top five. The site then looked at how many of each city's businesses have accessible, gender-neutral restrooms and deem themselves “Open To All” (i.e. they've signed a nondiscrimination pledge). From this data, Yelp found over 312,000 restaurants across the country that offer gender-neutral bathrooms, info that's already proven useful to users. The company reports that by the end of May, for instance, nearly 31,000 searches had been conducted using the site's Gender Neutral Restrooms filter.

In addition to this feature, Yelp is also introducing an LGBTQ+-Owned Business decal that queer business owners who want to promote their identities can place on their storefronts (it won't appear on their digital profiles just yet). Those who fill out this form (which asks about address details, not the owners' personal identities) by Friday, June 21 will receive the decal in the mail, free of charge.

Of course, not all business owners may feel safe displaying their LGBTQ+ identity, as it could open up opportunities for discrimination, harassment and more. Yet for those who choose to use it, the sticker can show the ways that LGBTQ+ people are entwined in their communities, by creating jobs, serving as leaders, and, for restaurants, literally nourishing their neighbors.

"We're thrilled this Pride Month to raise the profile of LGBTQ+ owned businesses across the United States and help consumers make informed decisions about where they’re spending their money," Miriam Warren, Vice President of Engagement, Diversity and Belonging at Yelp, told Mic via email. "We hope this decal will highlight an important part of a business owner's story while helping advance LGBTQ+ economic equity."

New York restauranteur Phil Johnson, who owns Hell's Kitchen's Gloria, tells Mic that he currently tries to communicate that his restaurant is a safe space for LGBTQ+ people via sidewalk art and the cocktail menu, which pays tribute to gay icons, institutions, and heroes. Johnson can't — and doesn't want to — separate his identity from his business. "The gayness is part of our identity, it’s part of who we are, it’s inextricable," he explains.

He plans to add the Yelp decal to his restaurant. "Putting this sticker on my front door would let all my guests know not only Gloria is a safe space for them, as customers, but my staff as well," Johnson says. "I would hope that New Yorkers would like to know they are supporting a LGBTQ+-owned business. I know many probably don’t think about this, but the ones that do, I am grateful for."

Yelp's creation of the decal, as well as its decision to provide LGBTQ+-identifying users with easily accessible information on places in which they will be specifically welcomed and accommodated, is supremely helpful to queer customers and owners. And hopefully, the company's latest measures will put pressure on businesses that are not actively working to help the LGBTQ+ community to change their ways, as it'll become increasingly obvious which places are showing their support and which aren't.

More like this
They couldn't fly their Pride flag, so this couple turned their house into a rainbow
By Tracey Anne Duncan
Makeup for men wants to defy the gender binary — but does it really?
By Melissa Pandika
Homophobes tried to sabotage a bakery for selling Pride cookies. They failed miserably
By Tracey Anne Duncan
Stay up to date