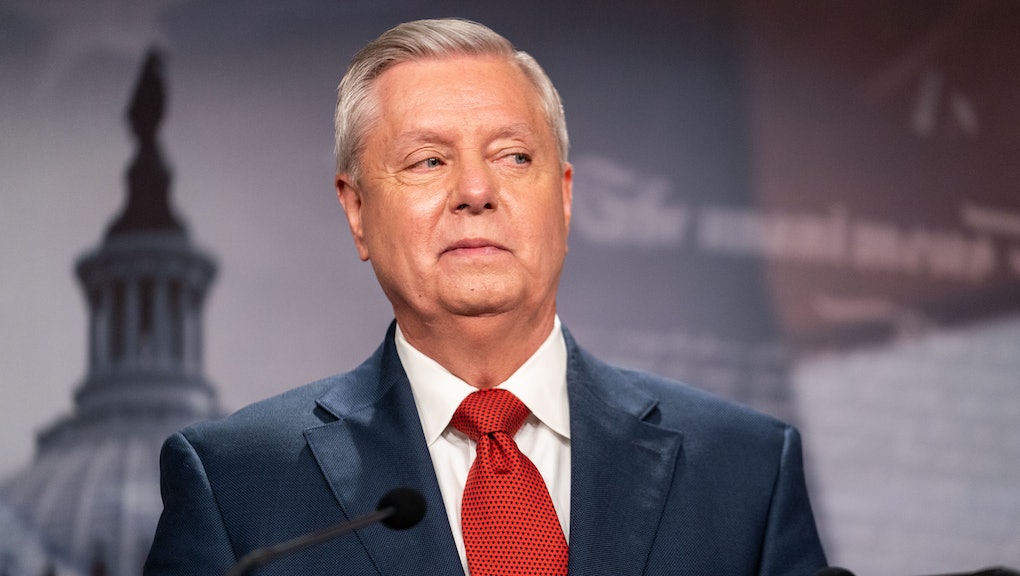 Lindsey Graham is about 8 months late to the impeachment party

Let's go back to those heady days of this past January, shall we? Donald Trump was still president, after the best efforts of his supporters to ensure he remained so for another term didn't quite play out the way they'd hoped. Indeed, the attempted insurrection at the United States Capitol represented such a severe threat to governance in this country that almost immediately, members of Congress began calling for Trump to be impeached for his role in inciting the riot. Here then is Sen. Lindsey Graham, just two days after a MAGA-addled crowd breached the halls of the Capitol while threatening to lynch the vice president:

Later in his Twitter thread, Graham refered to "the radical liberal Democrats' never-ending desire to keep the conflict going" as reason enough to be suspicious of impeachment. Perhaps unsurprisingly, Graham chose to acquit Trump when he was, ultimately, impeached — the second time the South Carolina Republican had voted to let the president off the hook for his despicable behavior.

I raise this depressing trip down memory lane because it seems that Graham has rethought his position on impeachment, now that there's a Democrat in the White House.

"I think Joe Biden deserves to be impeached because he's abandoned thousands of Afghans who fought with us, and he's going to abandon some American citizens because he capitulated to the Taliban to [an Aug. 31] deadline [to withdraw]," Graham declared during a Newsmax segment on Tuesday.

This is not, in fact, the first time in recent days that Graham has used the U.S.'s (admittedly horrendous) withdrawal from Afghanistan as a pretense to accuse Biden of impeachable offenses. Here he is on Fox News just last week:

To be clear, rank hypocrisy and overt opportunism are hardly anything new in American politics — especially if your name rhymes with "Schmindsey Schmam". Even so, this is a particularly egregious example from someone who's earned a well-deserved reputation as a world-class ass-kisser. Remember that the unfolding calamity that is the American withdrawal from Afghanistan was in large part the direct result of Trump's foreign policy, which not only included capitulations to the Taliban themselves, but was also predicated on the exact same sort of abrupt withdrawal Graham is now so incensed by.

While Graham's sudden enthusiastic embrace of impeachment is certainly fueled, in part, by the broader Republican sense that Biden's handling of the withdrawal means there's political blood in the water for them to capitalize on, it's also likely fueled by his own personal political considerations. Because at the same time Graham's been banging on about impeaching Biden, Fox News' Tucker Carlson — perhaps the most influential non-elected conservative in the country outside of Trump himself — has been saying stuff like this:

It seem deeply plausible then that Graham, as savvy a political operator as anyone else in Washington, understands that he needs to throw some bloody red meat to his party's rabid base in order to continue being a senator. Whether it's enough to call off the Carlson-baited hounds remains to be seen.