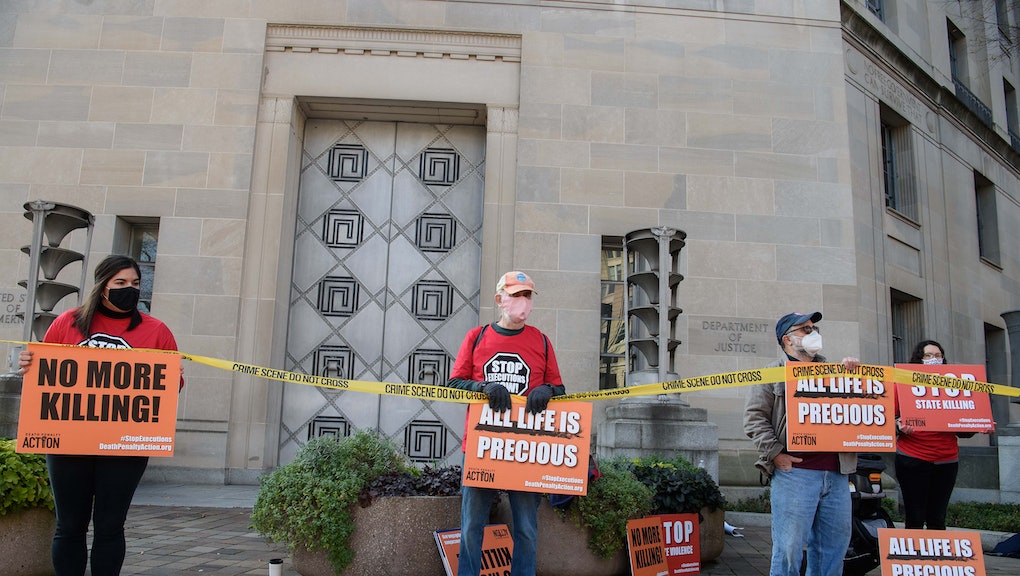 People protest against federal executions outside the Department of Justice in Washington, D.C., on Dec. 10, 2020. [NICHOLAS KAMM/AFP/Getty Images]

Update Jan. 13: The federal government executed Montgomery early Wednesday morning. A federal judge had issued a stay late Monday, ruling that a trial was needed to determine whether Montgomery was mentally competent enough to be executed, but the Supreme Court overruled that stay late Tuesday. In a press release, Kelley Henry, an attorney for Montgomery, said, "Lisa was much more than the tragic crime she committed, a crime for which she felt deep remorse before she lost all touch with reality in the days before her execution. Lisa was also much more than the horrors inflicted upon her, the sexual violence and abuse she endured at the hands of those who were supposed to love, nurture, and protect her … We are here to say to every woman and girl who has been the victim of violence and degradation: You matter. Your pain matters. You are more than a victim. You are a survivor. ... You deserve to be loved." Our original story appears below.

When she was a child, Lisa Montgomery was subject to routine sexual violations, rapes, and abuse. None of this mattered in 2007 when she was sentenced to the death penalty for a crime she committed while suffering from extreme mental psychosis, a debilitating illness that her doctors concluded resulted from her decades of gender-based violence. Now, Montgomery awaits her killing in a federal death row prison located in Terre Haute, Indiana. She’s the only woman currently awaiting the federal death penalty, and if she’s executed on Jan. 12, in the waning days of the Trump administration, she’ll be the first woman executed by the federal government in seven decades.

No one disputes her crime: In 2004, Montgomery crossed the state line between Kansas, where she lived, and Missouri. She killed a pregnant woman, then extracted and kidnapped her unborn child. Later, Montgomery confessed to the crime and the child was returned to her father.

It's a horrific crime. But advocates note that Montgomery being sentenced to the death penalty is out of step with previous cases of a similar nature. In a 1988 case, where a mentally ill woman also killed a pregnant woman and extracted the fetus, the perpetrator was sentenced to life in prison; more recently, in 2015, a woman was sentenced to 100 years in state prison for a crime similar to Montgomery's. Death penalty cases are supposed to be consistent across conviction and sentencing, but that doesn't appear to have happened here.

Montgomery’s legal team, alongside experts and advocates against the death penalty argue that Montgomery should be allowed to live not just because of the arbitrary nature of her sentencing, but because of the sexist nature of her abuse, sexist arguments made at her trial, misogynistic legal team in charge of her initial defense, and gendered understanding of criminality. They say that while a history of sexual violence doesn’t excuse what she did, it does explain why she did it. They argue that instead of execution, Montgomery's sentence should be commuted to life without the possibility of parole.

"Children that go through childhood abuse, it changes who they are."

Ultimately, it's President Trump's decision whether to save Montgomery from federal execution. But it’s rare for a woman to be sentenced to death, and even rarer for a woman to actually be executed. Advocates say Montgomery was unfairly persecuted because her crime was interpreted within the context of how we expect women, particularly white women, to behave in American culture. "The most transgressive behavior that a woman can engage in [is] to kill a child," Sandra Babcock, the faculty director of the Cornell Center on the Death Penalty Worldwide at Cornell University, tells Mic. "Women are supposed to be nurturing and caring. They're the ones that society expects are going to fill that role."

Because Montgomery broke with that stereotype, she was punished by the courts, her advocates say. "We can't ignore the gender dynamics that are at play when we do have women who are facing the death penalty," Ngozi Ndulue, the director of research and special projects at the Death Penalty Information Center, tells Mic.

One of Montgomery's legal team's main arguments is that her original defense team didn't provide the jury with an adequate illustration of the ways that sexual trauma and sustained abuse warp and harm the brain. Diane Mattingly, Montgomery's older half-sister, knows from personal experience that "children that go through childhood abuse, it changes who they are," as she said on a recent call with reporters.

Clinical research supports this as well. Numerous studies in the past decade have connected childhood sexual trauma and abuse with adult onset of schizophrenia, post-traumatic stress disorder, and depression, among many other illnesses. "The crime that she committed is so directly linked to her experience," Babcock, who is also one of Montgomery’s legal representatives, tells Mic. Montgomery's mother drank heavily during her pregnancy and Montgomery was born with brain damage, per a biography posted by the Cornell Center on the Death Penalty Worldwide. As she grew up, Montgomery was the victim of child sex trafficking via her mother, gang rape, and physical and emotional abuse that resulted in her developing multiple mental illnesses, said Shea M. Rhodes, the cofounder and director of the Institute to Address Commercial Sexual Exploitation at Villanova University's Charles Widger School of Law, in a press call. Rhodes, a former assistant district attorney, signed on to a recent letter asking Trump to grant Montgomery clemency, alongside 40 other current and former prosecutors.

Mattingly has been advocating on behalf of her half-sister Montgomery for years. When Mattingly was 8 years old, the state of Kansas placed her in foster care after finding that Judy Montgomery — Lisa Montgomery's mother — was unfit to care for her. "We started out both in a horrific situation," Mattingly said. But while Mattingly got to leave the home, Lisa remained in Judy's custody and suffered continued abuse.

"Lisa stayed in that home, and it continued on worse than it was when I was [there]," Mattingly said on a call with reporters.

"[Montgomery] had been the victim of really sadistic domestic violence and sexual violence, including rape by her husband who had videotaped it," Babcock tells Mic. But not only did the original defense team fail to explain Montgomery’s crime in the context of the abuse she suffered by multiple men, including members of her family, but the prosecution additionally dismissed what little explanation was offered as the “abuse excuse,” says Babcock, who read the trial transcripts and studied Montgomery's case. This rhetoric downplayed the abuse and negated the long-lasting damage this abuse did to Montgomery's mental, psychological, and emotional health.

Babcock argues that there was little weight given to Montgomery's traumatic history at the initial trial because sexual assault was seen as a routine part of the experience of being a woman. "I think that prosecutors and defense lawyers minimize the experience of sexual violence when it happens to women because they see it as an inevitable part of being a female in our society," Babcock says.

During the sentencing portion of her trial, meanwhile, the prosecution argued that Montgomery should be sentenced to the death penalty in part because she was a bad mother. The prosecution said that Montgomery didn’t clean, cook, or nurture her children, so therefore she did not deserve a more compassionate sentence. Ndulue tells Mic that mothers in the criminal justice system are judged using specific metrics— that is, whether they fit into the "stereotypical roles that we have created for them ... whether they're going to be judged on their mothering [or] whether they are going to be judged on being seen as outside of our view of who women should be."

Ndulue notes that the death penalty is supposed to be reserved for the "worst of the worst cases and the worst of the worst offenders," but that often, and as in Montgomery's case, victims of the death penalty are those who have also fallen victim to other social ills and inequalities. Even the judges charged with evaluating Montgomery's legal team's applications for reprieve seem to be divided as to what her fate should be: After members of Montgomery's legal team contracted COVID-19 last November, a judge granted a stay of execution until after the new year. But the Justice Department rescheduled her execution for Jan. 12, and there's been no further delay granted.

The legal world doesn't hold competing truths well; the court room tends to think of victims and perpetrators as two distinct entities, Babcock explains. But in Montgomery's case, she's both the perpetrator and the victim, and that's what the legal team is asking the court — and Trump — to keep in mind. "The fact that they have committed acts of violence doesn't mean that they give up any right to talk about how their acts were a consequence of how they were victimized in their lives," Babcock tells Mic of people like Montgomery. "That's what I think we are missing in this case — that deeper understanding of how we as a society have failed these women."

More like this
Should public transit be free?
By Andy Crump
Trump kept a Gitmo prisoner detained for 5 extra years. Biden has finally freed him
By Rafi Schwartz
The first insurrection felony sentence is here, and nobody's happy about it
By Rafi Schwartz
Stay up to date