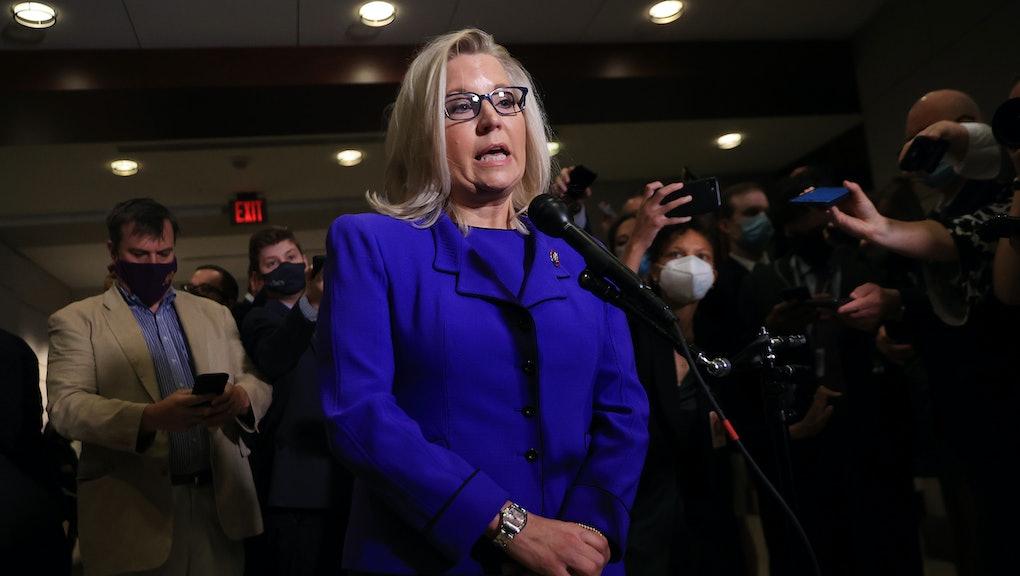 On Wednesday morning, Wyoming Rep. Liz Cheney was officially purged from the leadership ranks of the Republican Party, bringing this chapter of the GOP's embrace of full-blown cultism in service of former President Donald Trump to its inevitable conclusion. The final decision to depose Cheney was conducted during a closed door meeting by voice vote, with no official tally recorded. How convenient for them.

Cheney, whose cardinal sin against her fellow Republicans was simply stating the undeniable fact that Trump is a dangerous fascist demagogue who shouldn't be allowed near any elected office ever again, spoke briefly to her colleagues before they enacted their long-telegraphed coup, warning them that "if you want leaders who will enable and spread his destructive lies, I’m not your person. You have plenty of others to choose from."

"That will be their legacy," she added. She was reportedly booed.

By all indications, that legacy will likely end up belonging to New York Rep. Elise Stefanik, who enjoys the backing of the House Republican leadership team, as well as — crucially — Trump himself. The fact that Cheney had Stefanik beat on supporting Trump's legislative priorities during his time in office hardly factors into the calculus here. What matters to Trump, and thus to the GOP at large, is public fealty to the former president — who, again, I feel like it bears repeating, is no longer the president.

Trump, for his part, leapt on Cheney's ouster, calling her a "bitter, horrible human being" in a characteristically rambling statement posted to his hilariously underwhelming new "communications platform" (a.k.a. blog).

"I look forward to soon watching her as a paid contributor on CNN or MSDNC!" he added, using his favorite derogatory nickname for MSNBC. It does however raise the legitimate question of what, exactly, Cheney might do next. She is still a member of the House of Representatives (at least, for now) and thanks to her deposition, enjoys newfound adulation and attention from Democrats who are suddenly eager to embrace someone who essentially agrees with everything Donald Trump stands for, but wishes he'd been a little less obvious about it. Unpleasant as it is to admit that Trump is right about something, odds seem good that Cheney will, indeed, end up being cast by the national media in the same light as former Sen. Jeff Flake, current Sen. Mitt Romney, and others of that ilk, who were praised endlessly for their integrity after they evinced the bare minimum evidence of having a conscience. Cheney will likely make the same sort of rounds as her fellow "traditional" Republican colleagues.

Indeed, just minutes after her ouster as GOP conference chair, Cheney sat down for an interview with NBC News, already being heralded as a major event, despite her having spent an entire career giving televised interviews and statements. The impulse within certain corners of the national media class to turn Cheney into a martyr for some lofty — and entirely imaginary — idea of responsible conservatism is strong. The truth, however, is that she is nothing more than collateral damage for a movement she herself enabled. She is, if anything, a victim of her own hubris.

This, of course, is all a hilarious pantomime.

Still, this schism between Republicans who want all the things Trump wants without the baggage of a septuagenarian chaos agent getting in the way, and those who are all-in on kissing the ring of said septuagenarian, could legitimately dictate the future of one of the country's two major parties. It has already prompted a renewed effort by some within the GOP to splinter off into a new conservative third party.

"This is us saying that a group of more than 100 prominent Republicans think that the situation has gotten so dire with the Republican Party that it is now time to seriously consider whether an alternative might be the only option," former Trump-era Department of Homeland Security official and ersatz anonymous "resistance" figure Miles Taylor told The New York Times, ahead of a scheduled statement threatening a potential defection from the party.

"I’m still a Republican, but I’m hanging on by the skin of my teeth because of how quickly the party has divorced itself from truth and reason," he added.

This, of course, is all a hilarious pantomime meant to give the impression that there is serious soul-searching going on within the GOP. Don't fall for it. Here: Imagine a third party is actually formed by a cadre of ostensibly disgruntled conservatives. Sure, it might wreak temporary havoc with the Republicans' electoral prospects, splitting votes and dividing funders and funds. But do you really think if any of those people actually make it to Congress, they would vote in any way differently than if they'd been sent there as out-and-out Republicans?

Of course not. If it came to actually passing laws, this would be a third party in name only.

Still, if you survey the landscape of conservative politics, it's hard not take a few moments to enjoy the absolute sloppy mess Republicans have created for themselves. In the short run, it's the red-hued version of the "Dems in Disarray!" narrative that is immeasurably satisfying to watch, from a purely schadenfreudistic vantage point. But ultimately, this is the GOP embracing the id it's always had — a sloppy, uncomfortable process that will, with the benefit of hindsight at some point in the near future, seem as inevitable and natural as a snake shedding its skin to reveal the same creature it's always been underneath.

More like this
Here's a chilling peek into just how close Trump got to running a police state
By Rafi Schwartz
At least Mitch McConnell is honest about being terrible
By Rafi Schwartz
Marco Rubio wants to give survivors of domestic terrorism … one year of student loan relief?
By Rafi Schwartz
Stay up to date