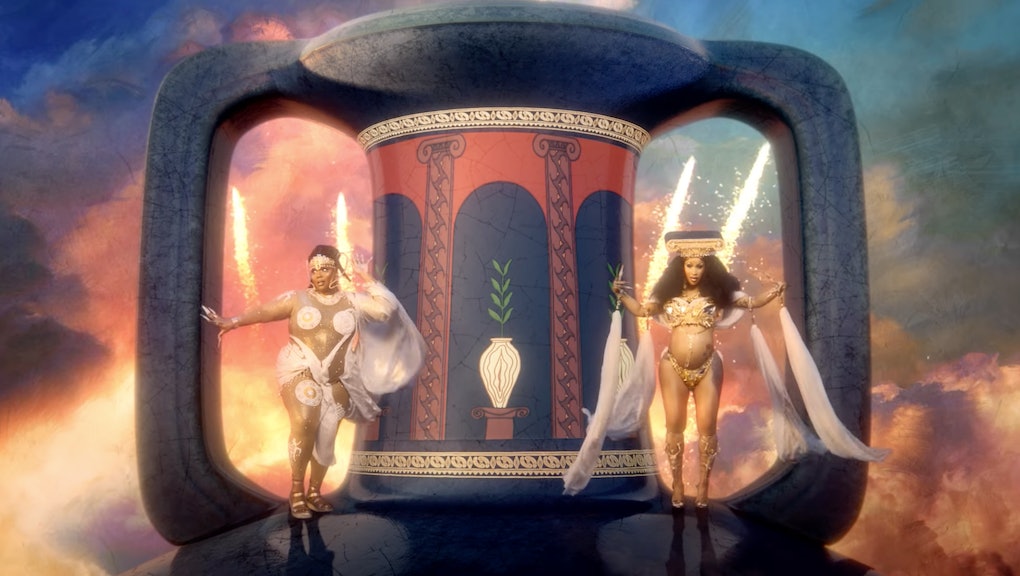 Screengrab from "Rumors" on Lizzo Music/Youtube

Lizzo and Cardi B serve Herculean realness on "Rumors"

When two goddesses of this world and titans of music collaborate, you go with the theme. Which is exactly what we get in the new Tanu Muino-directed video for "Rumors," the new single from Cardi B and Lizzo. If you're a millennial, expect to get flashbacks to Hercules' muses, as the two glamazons twerk their way off of Greek pottery and through a celestial tableau.

And while very fun to watch, the video seems a little too curated for social media, where it was highly teased to begin with, as opposed to something that the internet naturally picks up on and then wildly consumes. Albeit, if anyone can tell me what I'm supposed to like, it's Lizzo.

The song itself though is a little bit of a let down. It has a hopeful and playful beginning that lets you know it will be a meta commentary on our celebrity-obsessed culture. Lizzo sings "They don't know I do it for the culture/god damn/They say I should watch the shit I post/Oh god damn/Say I'm turning big girls into hoes/Oh god damn/They say I get groupies at my shows/Oh god damn," and then the beat and the catch kick in, "All the rumors are true."

The single meanders along from there addressing different rumors, leading up to a brass-led chorus that's a bit anti-climatic for what you want in a summer bop that you keep on repeat. Cardi B enhances the song with her sassy finesse on her verse, and even throws in a "WAP"-related nugget rapping, "The last time I got freaky/the SEC sued me." She is also gloriously dancing in a gilded boob mask and skirt while pregnant — you can't really do anything but stan that.

It is Not that "Rumors" is a bad song. I like it. It is fun and cheeky. It will be blared from cars and bars, as it should be. But it's just not the same caliber that we are used to from a Lizzo song, which is surprising for such a highly anticipated release as her first new music in two years. Her last release was 2019's Cuz I Love You, which made Lizzo the most nominated artist at the 2020 Grammy Awards. The major label debut featured new workings of some of the songs like "Truth Hurts" and "Good As Hell" that made Lizzo famous originally on her meteoric, flute-playing, twerking, body positive, owner of the internet rise to fame. And those songs had the staying power to be played furiously as singles, and then given new life on the album with critical accolades and continued rotation. "Rumors" just doesn't have that quality.

At the same time, Twitter is full of praise for our first taste of the dawn of a new Lizzo era. We all do love an anti-haters anthem, and that is certainly what "Rumors" is. You also can't deny the catchiness and relatability of the pandemic-referencing line, "If you thought that I was ratchet with my ass hanging out/Just wait until the summer when they let me out the house," the same way you can't help but to get behind her line "Black people made rock n' roll," sung over a visual reference to Rosetta Tharpe in the video. Perhaps I'm tapping in too much to the existential ennui of the current moment, and just can't find joy anymore. But I just wanted to be hit a bit harder by new music from our queen Lizzo. Regardless, this will surely be an exciting album cycle for the star, and there's certainly gold coming our way on this next record.