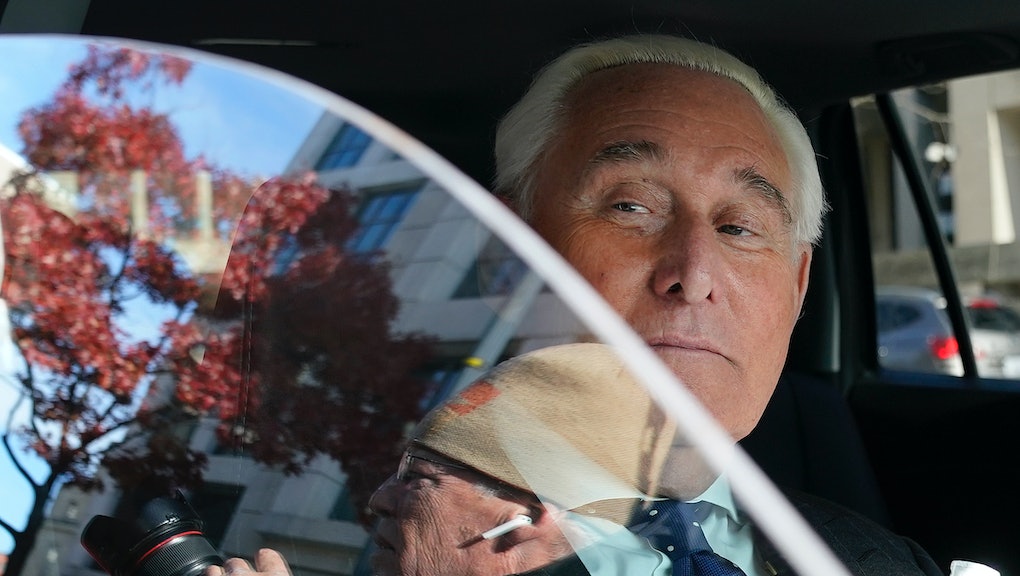 Roger Stone first gained notoriety in the political world decades ago as a self-proclaimed “dirty trickster” political operative who has a large tattoo of Richard Nixon’s face on his back. But on Friday, he added new notches to his political belt — seven, to be exact. The friend and former aide to President Trump was found guilty by a jury on seven counts, including lying to Congress, obstruction, and witness tampering.

The trial — a spinoff of Special Counsel Robert Mueller's investigation of Russian election interference — had everything to do with 67-year-old Stone’s relationship with Trump, and his role in the president’s 2016 campaign. Much of Stone’s trial explored whether he lied to prosecutors about his communication with WikiLeaks, the site that published the hacked emails of Hillary Clinton and the Democratic Party in an attempt to make them look bad to voters. The prosecutors presented evidence that Stone actively tried to get access to the stolen emails, and additionally said Stone would update Trump on WikiLeak’s plans to release the emails at strategic times throughout the campaign.

Trump took a short break from tweeting about his own impeachment proceedings to criticize the outcome of the trial.

During the trial, Rick Gates, the former business partner to Paul Manafort who served as Trump’s 2016 deputy campaign chairman, said under oath that he had personally been in the room when Trump received a call from Stone just after WikiLeaks had released stolen emails. Gates testified that after Trump hung up with Stone, the president had told him that “more information” would soon be following.

Stone will be sentenced in February. He is far from the only former Trump aide to have faced criminal charges from Mueller’s investigations. He joins the ranks of Manafort, Trump's 2016 campaign manager before Stephen Bannon and Kellyanne Conway took over, who was sentenced to more than seven years in prison in March; Gates, who faces up to 10 years behind bars at his sentencing next month; Trump's longtime personal lawyer Michael Cohen, who was handed a three-year sentence last year; and Michael Flynn, the former national security adviser, who lasted mere weeks on the job and will also be sentenced next month. All have been convicted of felonies.

Though Trump has the option to pardon these former aides from the federal crimes of which they have been convicted, that could actually exacerbate his political problems. The outcome of this trial for Stone is coming at an incredibly inconvenient time for Trump, as he faces allegations of presidential misconduct and bribery in the ongoing impeachment proceedings against him. Pardoning his former aides who have been convicted in court has the potential to reinforce the argument Democrats are making: that he has a complete disregard for the rule of law and surrounds himself with people who share that sentiment.

These convictions might not matter to Trump’s loyal base, but it's safe to say having multiple top campaign aides convicted of crimes isn't the best look. Over the next few weeks, we'll see whether it affects the public's opinion on the impeachment inquiry — and beyond that, whether the criminality that surrounds him can be effectively weaponized by the eventual Democratic nominee in 2020.