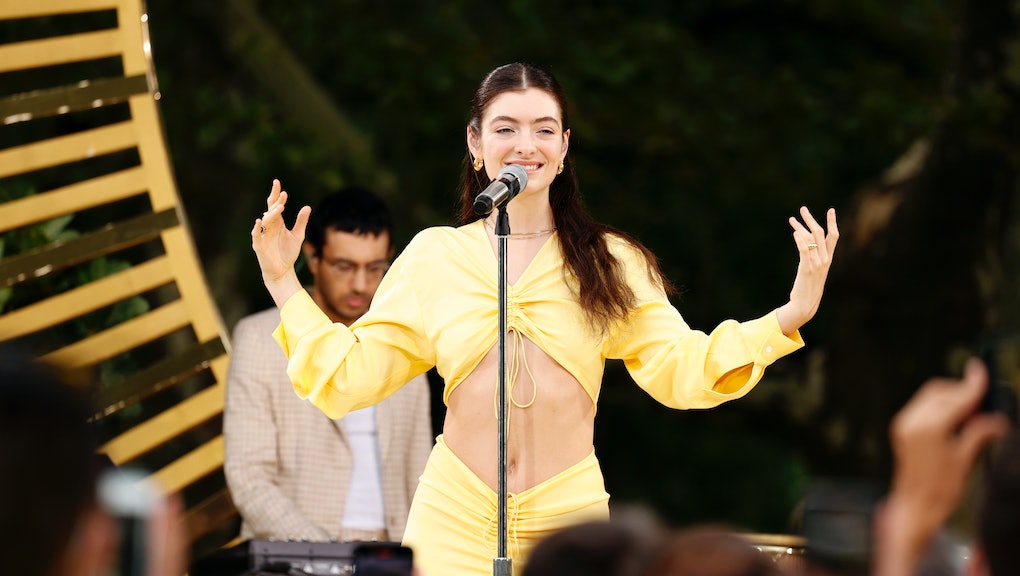 Pop stars are so engrained in our society that we don't even notice the gag of it all anymore. We are willing participants in their sugar-coated, leather-studded, disco ball-swinging fame machines. We choose our fighter and happily dawn the house colors, be it as little monsters or swifties or members of the bee hive. We are so hyped on being cogs in the fame machine, that we beg for it like the potty trained consumers that we are. But it feels different when we're consuming pop music. Pop is an escape from our existential dread. Our queen mothers of pop tell us how much they care about us all of the time, that they do it for us, that our happiness is what keeps them going. It's fifty percent saccharine joy in escapist fantasies, and fifty percent soulless worshipping as the world burns. And Luckily Lorde is here with her third studio album to throw a proverbial wrench in the dreaded system.

It is truly wild to take in Lorde's last eight years of fame considering that she's only 24. She came onto the scene at just 16 in 2013 with surprise mega hit "Royals," and overnight it felt like Beatlemania. Lorde was our new queen, even though she was singing an anti-materialism anthem about the plight of the middle class. She followed up the obsession-worthy hit with the melodramatic, pop goth Pure Heroine —which debuted at #3 on the charts — and just like that, one would think that the new superstar of pop was born. And she was a new superstar, but she didn't run with that new moniker like most newly minted shiny divas and their feverish fame teams tend to. Even her 2014 performance of "Royals" at the Grammy Awards was understated, with her on a center floor stage, breathily delivering her searing rebuke of society in a simple button down white top and black lipstick.

Lorde continued this theme by collaborating with Jack Antonoff on 2017's Melodrama, which while peaking at #1 on the Billboard charts, wasn't quite as commercially successful as Pure Heroine. It wasn't that it wasn't as good, but by taking a complete sonic turn to synthy, bold, bright production, Lorde had let us know she wasn't courting our adoration; she was seeking the joy of her own sound. Which she has done again in today's release of Solar Power, which is something in between a folk pop autobiography and an acid-soaked audio sun salutation to living a more authentic life.

But it's not just the audible shift on Solar Power that is perceptible — what's mesmerizing is the way Lorde is subverting the pop megastar rinse and repeat album cycle that we are so used to. When it comes to major radio pop mainstays like Ariana Grande, Taylor Swift, Rihanna, Dua Lipa, and the like, we're used to splashy album rollouts. Album art is teased for months, single releases are week-long press extravaganzas, merch is pre-released, stadium tours are announced months in advance. It is a domination game that is played skillfully, with trophies, Billboard charts and ticket sales all in mind.

But Lorde will not be doing that with Solar Power. In the time since Melodrama, she's had her social media locked and her phone set to grayscale to make it less appealing to scroll. She took four years to find a real life outside of fame, telling the New York Times of this impending reemergence to support Solar Power, "This is a break from my life. I come back and perform these duties because I believe in the album.” And she'll be performing these duties differently this time as well. Instead of a stadium tour where she would play to tens of thousands a night, she will be performing in theaters that house a few thousand that are normally home to rising indie stars.

She told the Wall Street Journal of the move to downsize touring, "I would be in the basement of a sports venue, showering in the basketball lockers—or, like, [the venue] would be named after a fast-food restaurant—and I’d just [think], ‘I don’t know if this is me.’ I’m an amphitheater girl. I’m a 150-year-old theater girl.'" Lorde also will not be selling traditional CDs, but will instead offer "music boxes" that are both eco-friendly, and also not eligible for the Billboard charts, a move that would probably make Taylor Swift faint. She charmingly continued, "I have zero anxiety about it, but I’m sure there is someone with a spreadsheet somewhere, who can point to the ways in which I’m making less money," adding, "I have more money than I could ever spend in my life. I own a home. I own some lovely rugs and great furniture and can buy whatever I want at the grocery store. Like, we’re good on money."

It is beyond endearing that having enough for Lorde is owning a home and being able to buy food. She's not chasing private jet-level capital, just like the lyrics on Solar Power would imply. The artistry of it all though is that these moves to downsize and downplay are only going to make Lorde more enticing to her stans, and make her more iconic in the pop landscape. While big glossy album press sells, there's something so much more intoxicating in courting mystery. Suffice it to say, at least for Lorde, maybe it is best to peak in high school — and let authenticity take the wheel from there.