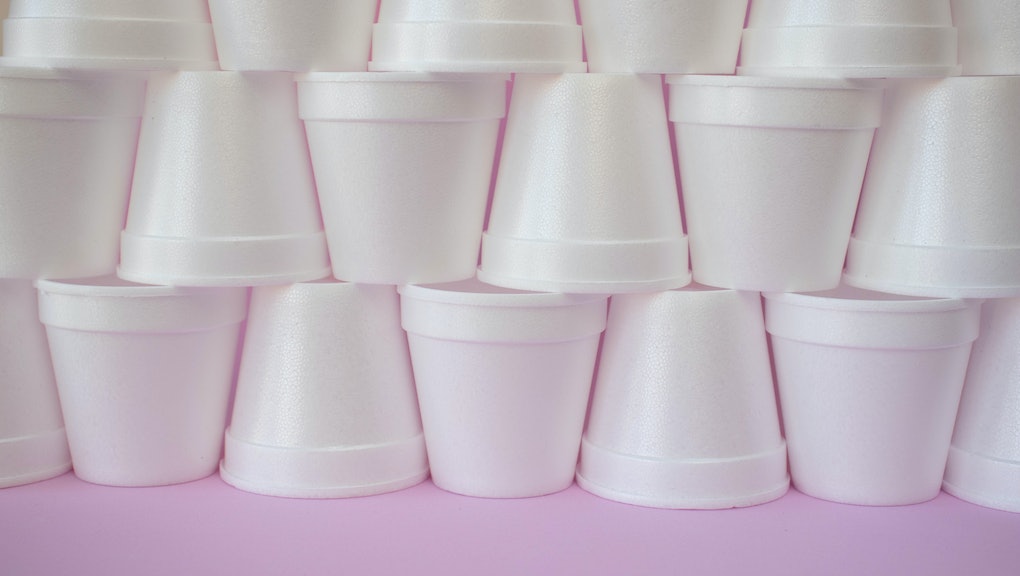 The more we learn about Styrofoam, the less there is to like about the popular disposable (but not biodegradable) material. The substance, also called Polystyrene, is made from chemicals that are known carcinogens, and like many single-use plastics, ends up in landfills, or worse, oceans. There, the white scraps break into small pieces that are often ingested by wildlife, and, as is the cycle of life, are eventually ingested by the humans who consume those animals. The danger of Styrofoam is not brand new information, but on April 30, Maine became the first U.S. state to officially ban Polystyrene.

As CNBC reports, Governor Janet Mills signed a law on Tuesday prohibiting all to-go foam containers statewide as of January 1, 2021. When enforced, the new ban will fine restaurants, grocery stores, and more businesses up to $100 for using Styrofoam containers, though hospitals, seafood shippers and state-funded food programs will be exempt from the ban.

Maryland has a similar bill pending, and though it was poised to become the first state to ban Styrofoam, Republican Governor Larry Hogan has yet to sign the bill into law. Hawaii is also eying a statewide plastic and foam ban and California is also proposing a state-wide phaseout of single use plastics by 2030. Several cities, including New York, Washington D.C., Los Angeles, San Francisco and Nantucket, have also banned single-use foam products (a full list of areas banning Styrofoam is available on Groundswell).

Unfortunately, some states are fighting for their citizens' rights to pollute. The same week that Maine's styrofoam ban was signed into law, Florida lawmakers approved a bill that would make banning single use plastics illegal in any Florida municipality through 2024, despite the fact that the coastal state already has 10 cities with restrictive plastic ordinances. Tennessee is also on its way to passing a law to stop cities from banning plastic.

These regions are thankfully in the minority, and their reluctance to protect the environment hopefully will not be long term. In early 2019, the Alliance To End Plastic Waste (AEPW) bonded 28 global companies in a $1.5 billion pledge to limit plastic waste and clean up the impacts of single-use packaging. To date, the world produces nearly 40 tons of Styrofoam each year, a substance that is not recyclable and could take up to one million years to decompose. Assuming all that Styrofoam makes it safely to a landfill, rather than, say, the ocean, that's a huge amount of increasingly uninhabitable space to be filling with a substance, that, as mentioned above, is made of carcinogenic materials.

And yet, many of us continue to use Styrofoam as packaging because it's cheap, efficient, and easily portable. Grabbing a coffee to-go in a Styrofoam cup, or loading up a takeout lunch in a foldable Styrofoam container, is a daily practice for countless people, and phasing out the toxic substance completely won't be easy for anyone — particularly businesses who rely on the lightweight, low-priced containers to meet margins.

Perhaps it will take more effective bans or a larger education about the effects of Styrofoam to remove the toxic, pollutive product nationwide, but the fact that one of America's northernmost states is getting rid of it sets the tone for what may one day be a precedent.

More like this
Eating meat is killing people, but not in the way you think
By AJ Dellinger
Brood X is here, but I'm okay with it actually
By Rafi Schwartz
Biden's pledges aren't enough to avoid the worst effects of climate change, new study says
By AJ Dellinger
Stay up to date