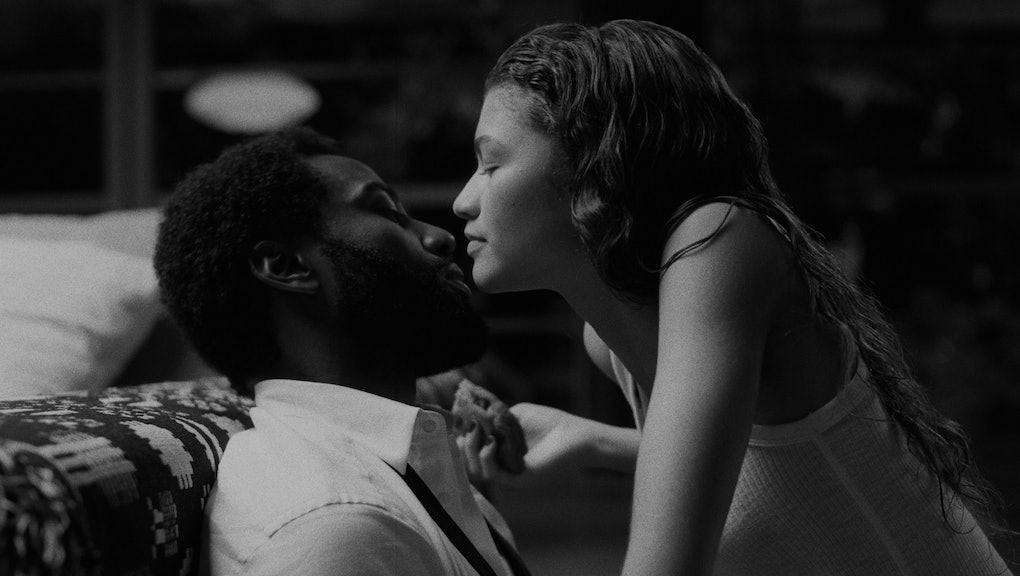 'Malcolm & Marie' is talking too loud and saying too little

I hesitate to quote James Baldwin in a review about a movie that would seem far beneath Baldwin’s stature because he is so often selectively and deliberately taken out of context. But as I watched Malcolm & Marie, the memory of a passage from his book-length essay The Devil Finds Work kept nagging at me. The passage centers on the question of identity in a wide-ranging chapter that bitterly reflects on the various functions that Black characters, through white gazes, have played in film throughout the years, from the Black service maid of Guess Who's Coming to Dinner? to the sympathy-stirring (and sometimes murdered) Black child in works like Sol Stein's novel The Childkeeper. Baldwin's words rose up most forcefully during a scene late in Malcolm & Marie where Marie (played effortfully by Zendaya), giggles as Malcolm (played exasperatingly by John David Washington), rants about a Los Angeles Times review for his latest film.

Malcolm’s complaint spans everything from race to gender politics to violence onscreen, to capital-A art, to capital-C cinema and who gets to tell certain stories. At the end of his impassioned stream of consciousness, he loses steam, tries to make light of his explosion, and walks away. Then he starts shouting again. This, in effect, is the movie. Each new argument is almost magical in how it materializes out of nowhere, then disappears just as suddenly.

“Identity,” Baldwin writes, “would seem to be the garment with which one covers the nakedness of the self; in which case, it is best that the garment be loose, a little like the robes of the desert, through which robes one’s nakedness can always be felt, and sometimes discerned. This trust in one’s nakedness is all that gives one the power to change one’s robes.”

The writing is so bad that it almost seems intentional.

As bald-faced as it is in Malcolm & Marie, writer-director Sam Levinsion tries to sublimate the notion of identity, specifically with regards to how consciously he does or doesn’t use the race and status of his two leads to comment on that which he might not be given credence to say if he were to do so in his own white skin.

Here, sincerity would trump offense, the earnestness of Levinson’s art withstanding any harsh takes against it. After all, the main characters spout tough, surface-level monologues railing against hypocritical, technically hypothetical film critics (the omnipresent “white woman from the L.A. Times” referenced throughout is a plausible nod to Katie Walsh who, IRL, panned Levinson’s previous film, Assassination Nation), racism within the film industry, misogyny and slut-shaming, and other long-winded pontifications of meaningless consequence. Some have described this as canny, judgement-proof filmmaking. Brian Tallerico, in his review of Malcolm & Marie for rogerebert.com, writes, “I'm almost impressed by the way it insulates the film from bad reviews as fans will just claim critics are being sensitive. Nice play, Levinson.”

But it’s really not difficult to critique a movie like Malcolm & Marie, despite the supposed minefield Levinson creates for people who would do so. A lovers’ quarrel chamber piece starring two popular actors lashing invectives against problems within their own industry, the movie would have something if the points being made stung or touched on new ideas, industry secrets, or meaningful criticisms.

But the writing is so bad that it almost seems intentional. Everyone speaks in full, unbroken sentences, which more charitable viewers have compared to theater dialogue. “Do you know how disturbing it is that you can compartmentalize to such a degree that you can abuse me while eating mac and cheese?” Marie asks. “You can't hang everything on identity,” Malcolm says (in a monologue that is much, much longer than the rest of this excerpt). “You can't say that I brilliantly subverted this trope 'cause I'm Black, but I fell into this one because I'm a fucking man! Identities are constantly shifting. Does the male gaze exist if the filmmaker's gay and not straight? And to what degree?” Instead, Levinson’s project begs larger questions about his aesthetic and thematic choices, questions that, especially when considering how the casting and writing of his two leads is used, more or less succinctly undermine the entire enterprise.

'Malcolm & Marie' lies somewhere between a virtuosic student film and a Gucci ad, photographed and staged to maximize aesthetic glamour while rolling out what are supposed to be messy, revealing scenes of domestic tension.

In terms of its packaging, the seriousness of Malcolm & Marie was baked into the production well before Netflix marketed it as an awards contender. Shot in 35mm black-and-white film, the movie’s burnished, stark texture immediately foregrounds its thematic intentions: nothing Malcolm or Marie says is as simple as it may seem, everyone’s intentions are gray. Admittedly, this tactic does provide a momentary beauty, a tactile quality so often missing from TV and film. But Malcolm & Marie lies somewhere between a virtuosic student film and a Gucci ad, photographed and staged to maximize aesthetic glamour while rolling out what are supposed to be messy, revealing scenes of domestic tension.

One of the film’s largest mistakes is in trusting that the only two people we see in the movie are interesting, and failing that, interestingly portrayed. But Zendaya and Washingston mar the film by gravely misjudging their skills as actors and, given their behind-the-scenes involvement, creative sensibilities.

Levinson, as a white writer and director, has received an inordinate amount of attention for being wholly responsible for a movie like Malcolm & Marie, one that places white words in the mouths of Black actors whose characters are criticizing white people. This is a conversation that usually rankles for its circuitousness, but here it touches on something. Zendaya and John David Washington’s involvement as producers and uncredited co-writers has largely been cast aside as background information, even though they lent both their money and tacit approval to the film. Instead, the focus has rested with Levinson, who has the ability to deflect criticism via the enthusiastic collaboration of his stars. Deniability aside, Malcolm & Marie is still very much Levinson’s creation, one that signals not a career-ending misstep, but a bizarre opportunity for others like him to delude themselves into believing their “faith in the collaborative process of filmmaking” or whatever, as he said to The Independent, will absolve them of any choices made.

But there have been other, more egregious perpetrators of this kind of synergetic performance before. For instance, white artist Joe Scanlan’s creation Donelle Woolford, a fictional Black female artist who has been variously portrayed by Namik Minter, Abigail Ramsey, and Jennifer Kidwell.

Manifested from the desire to “exploit the historical and cultural references” of an imaginary artist, Scanlan’s character sits at an uncomfortable, bizarre nexus of impulses. Woolford’s biography is slippery, shifting birth dates and places depending on the venue she presents in. During the 2014 Whitney Museum of American Art’s Biennial, Woolford appeared not as a creation, but as a person, counted as one of a handful of Black artists in the program. The women who “played” her claimed Woolford rather than distance themselves, emphatically stressing the collaborative nature of the project and how their involvement was often overshadowed by Scanlan.

In her book White Negroes, Lauren Michele Jackson, a cultural critic and assistant professor of English at Northwestern University, dissects both Scanlan’s motivations and the larger effect that “Donelle Woolford” had on the art world. “The problem is and isn’t Donelle because Donelle doesn’t exist,” she writes. “Donelle can’t talk back except through the mind and body of her keepers.”

In Levinson’s case, it might be true that you don’t get a movie as loudly acted as Malcolm & Marie, as conspicuously ambitious and spare, as myopically focused on its only two characters, without at least some measure of agreement from the stars. But the genesis and execution still rest where they always have. Less interesting than the content of what Levinson might be trying to say is his motivation for doing so in this way. He likely subscribes to the same belief writer Lauren Oyler recently stated in a profile for The Cut, that “If you’re somebody that nobody’s criticizing, nobody’s taking you very seriously.” And he may be right, just not for the reasons he wants.

More like this
I never want Tucker Carlson to stop talking about Nicki Minaj's cousin's friend's enormous balls
By Rafi Schwartz
Colin Kaepernick's new Netflix documentary highlights the man behind the icon
By Keith Nelson Jr.
Steve from 'Blue's Clues' gave us the closure we didn't know we needed
By Kara Weisenstein
Stay up to date