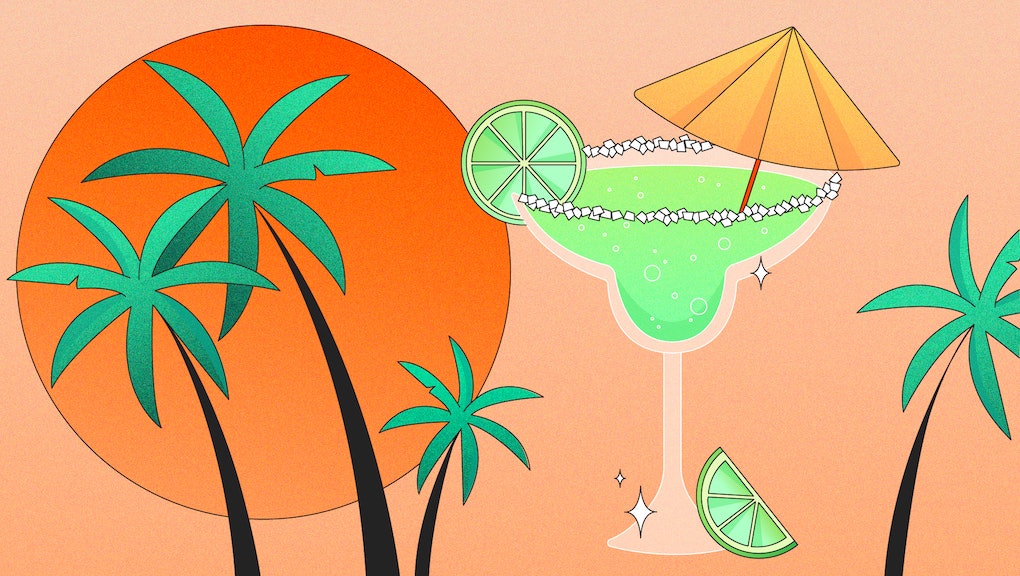 Nothing quite epitomizes the carefree spring mood like sipping margs in the sun — and nothing quite spoils it like accidentally splashing lime juice on your arm and awakening to a garish red splotch the next day. This potential hazard of an otherwise chill pastime is commonly known as “lime burn,” and unlike a hangover, it can linger for longer than a day. To learn more about this less-than-cute phenomenon (also known as a "margarita burn"), as well as how to prevent and treat it, I spoke with Golara Honari, a clinical associate professor of dermatology at Stanford Medicine.

What exactly is lime burn?

Lime burn — technically known as phytophotodermatitis — is a reaction that can occur when your skin is exposed to a combination of the ultraviolet A (UVA) rays in sunlight and furocoumarins, a class of compounds present in certain plants, Honari tells me. Besides limes, other citrus fruits, as well as celery, parsley, carrots, figs, and several other plants also contain these compounds.

This reaction results in redness within a day or so of exposure. “In severe cases, [people] may see tiny little vesicles or maybe even larger blisters,” she says. After a few days, she adds, hyperpigmentation, or darkening of the skin, can occur, lasting last anywhere from weeks to months and in rare cases, even years. In some people, hyperpigmentation without redness might be the only sign of phytophotodermatitis. Thankfully, Honari notes, it tends not to itch.

Here’s where we’re going to get a little nerdy: When your skin absorbs furocoumarins — usually within 30 minutes to two hours of exposure — UVA rays cause changes in these molecules that enable them to attach to the DNA in your skin cells, according to Honari. “They kind of lock [the DNA],” she says, disrupting cell metabolism and division, and causing cell death, leading to redness and inflammation.

The reaction of UVA rays with furocoumarins can also increase the size and activity of the tiny packets that make the pigment melanin in your skin, she adds, causing hyperpigmentation.

What might make this more likely to happen to me?

Phytophotodermatitis is more common in the spring and summer months, although it can happen at any time of year, Honari says. Having a job that requires you to work outdoors and with plants that contain furocoumarins — for instance, as a bartender, grocer, or farmer — also puts you at risk.

“I think lighter-colored skin is actually a risk factor,” Honari adds. While people of any shade can experience a variety of skin eruptions aggravated by sun exposure, she notes that phytophotodermatitis is reported more often in fair-skinned individuals.

How can I prevent it from happening to me?

Firstly, remember that just because furocoumarins are natural compounds doesn’t mean they’re harmless, and anyone can get lime burn, Honari says. As someone once told her, “Nature is dangerous.” If lime juice or some other furocoumarin-containing ingredient lands on you while you’re outside, she suggests washing it off with soap and water within 15 minutes of exposure, which can help prevent phytophotodermatitis.

Ample sun protection is also key, she adds. She recommends applying a broad spectrum sunscreen. Some sunscreens block only ultraviolet B (UVB) rays, but you want one that also blocks the UVA rays that contribute to lime burn. Lean on other modes of sun protection, too, like staying in the shade and wearing clothes that cover your skin as much as possible. “UVA also goes through the windows,” Honari points out, so be careful around them if you decide to take your marg inside.

What should I do if I already have lime burn?

Fortunately, most cases of phytophotodermatitis are mild, and will go away on their own, Honari says. In the meantime, she strongly recommends staying out of the sun, since the affected area will likely still be sensitive to sunlight. A cool compress and nonsteroidal anti-inflammatory drugs (NSAIDs) like aspirin or ibuprofen can alleviate the burning sensation and pain, she adds. For more severe cases, a doctor can prescribe stronger topical or oral steroids, and possibly antibiotics in the case of secondary infection.

When should I see a doctor?

Honari suggests seeking medical attention if the affected area is large, with lots of redness or blistering. Remember, though, that severe cases like these are pretty rare. You might also want to see a doctor if you keep experiencing lime burn or other incidences of heightened sensitivity to the sun to rule out other causes, such as a product that may be causing an allergic reaction upon sun exposure or an autoimmune condition.

Again, for most people, lime burn will be little more than a weird-shaped mark that doesn’t photograph well. Regardless, the best-case scenario is to avoid it in the first place, which means staying out of the sun, or at least not skimping on sun protection, and enjoying your cocktail with care.

More like this
Is the Pegan diet really worth all the effort?
By Tracey Anne Duncan
These zero-waste restaurants are committing to environmental conservation
By Joseph Lamour
Will Michelin's Green Star finally inject some eco-consciousness into fine dining?
By Joseph Lamour
Stay up to date