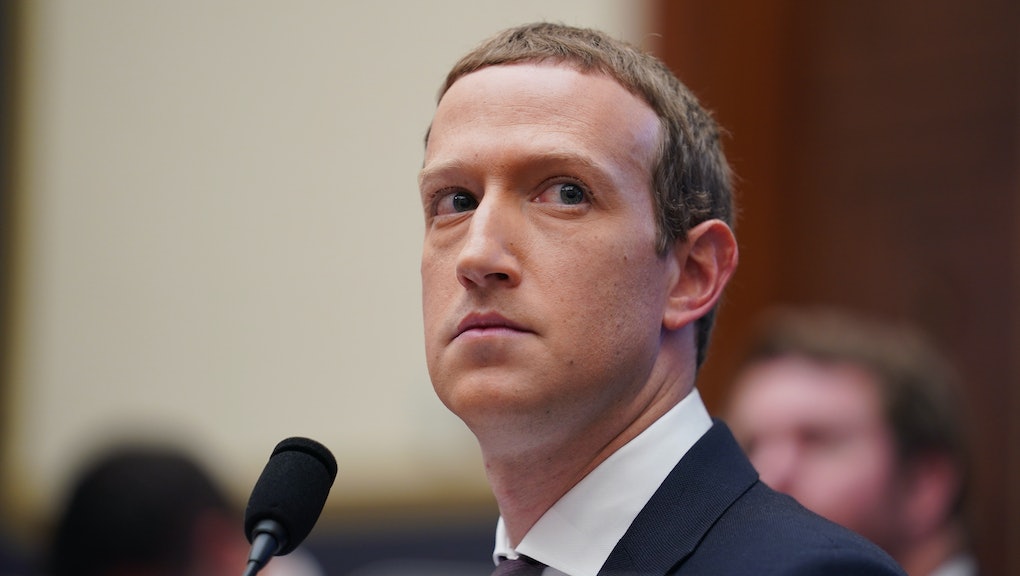 In October, Facebook founder and CEO Mark Zuckerberg made national headlines when he visited Washington, D.C., to testify before Congress about Facebook’s new cryptocurrency, Libra. Having faced scandal after scandal during the past few years, this visit to Capitol Hill was contentious, with progressive Reps. Alexandria Ocasio-Cortez (N.Y.) and Katie Porter (Calif.) in particular grilling the Facebook boss about his website's practices. But it turns out that Zuckerberg's appearance before the House wasn't the only stop he made while in the nation's capital: NBC News reported late Wednesday that Zuckerberg had a private dinner with President Trump during his October visit.

Also at the dinner was Peter Thiel, a multi-billionaire Silicon Valley entrepreneur, Republican donor — and, oh yeah, Facebook board member. Thiel, like Facebook, has a fraught relationship with the media; Zuckerberg spent part of his October testimony explaining his resistance to fact-checking political advertisements on his platform, even as the spread of false information on Facebook faces increased scrutiny.

While the White House did not comment on the dinner, Facebook did. “As is normal for a CEO of a major U.S. company, Mark accepted an invitation to have dinner with the president and first lady at the White House,” a company spokesman wrote in an email to NBC News.

It is in fact routine for business leaders to meet with the president. But this particular visit is troubling, considering it seems to have been intentionally kept secret. At a time when Facebook was under intense pressure to apply its standard of banning ads that have “deceptive, false or misleading content” to politicians, Zuckerberg was meeting surreptitiously with the president whose false ad about Vice President Joe Biden and Ukraine had prompted public outcry. While networks like CNN refused to run Trump's misinformation, Facebook — and Zuckerberg specifically — defended accepting this sort of paid advertising.

The newly revealed dinner was not the first meeting between Zuckerberg and Trump, as the two met in the Oval Office in September. When asked during his October hearing whether he and Trump discussed anti-trust regulations in September, Zuckerberg was cagey, saying, "Those subjects didn't come up, but in general I don't feel like it's appropriate for me to comment in too much detail on private conversations."

It's not the most inspiring answer, but at least the White House meeting was known to the public at the time. No details have come out about the topics of conversation at the October dinner between Trump, Zuckerberg, and Thiel.

Facebook has also received immense backlash — both from the public and from elected officials — in the wake of the 2016 election, where the platform was used by Russian troll farms to spread fake news. The goal was to incite conflict while diminishing faith in the U.S. government, and American intelligence agencies have concluded that Russia successfully interfered in the 2016 campaign. Though Trump has repeatedly dismissed the idea that Putin wanted him to win, Putin himself has confirmed it to be true.

Zuckerberg’s political problems have only been growing, especially with one of the leading Democratic presidential candidates, Massachusetts Sen. Elizabeth Warren. Warren has made one of her big policy issues “breaking up big tech,” and it appears she's gotten under Zuckerberg's skin: In early October, audio leaked of Zuckerberg saying at an internal Facebook town hall that it would “suck” if Warren became president, adding that the company would have to take her administration to court if she tried to enforce anti-trust law against Facebook.

Warren has leaned into that conflict with Zuckerberg. She's already commented on his meeting with Trump, tweeting Thursday that the summit amounted to "corruption, plain and simple."

As Democrats become more outspoken against and wary of Facebook, and the first presidential election since Facebook’s fake news fiasco approaches, the relationship between Trump and Zuckerberg will be closely watched.