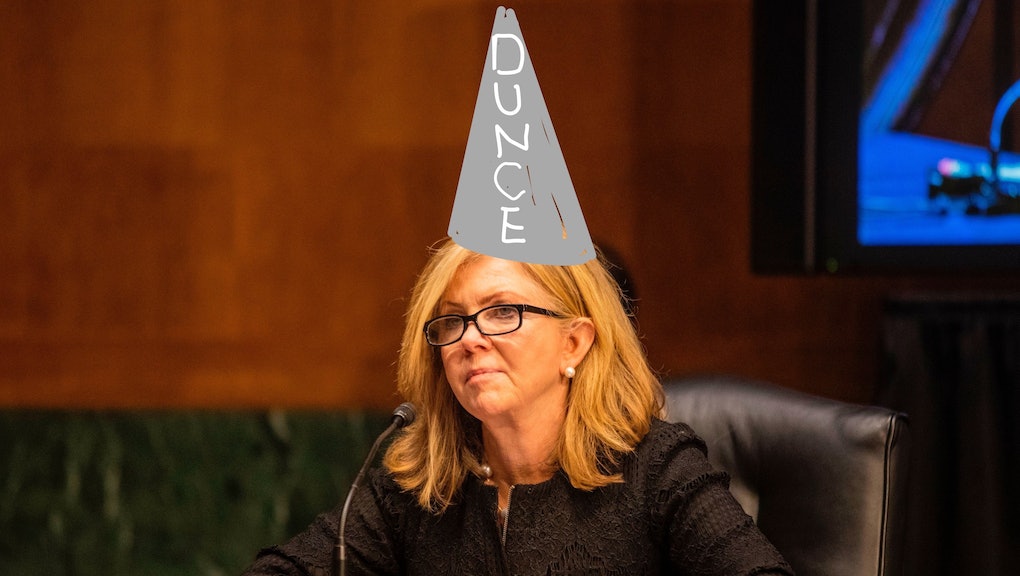 The simmering feud between Taylor Swift, an enormously successful pop star, and Marsha Blackburn, an embarrassingly inept United States senator, reignited this week, over — what else? — socialism. During an interview with flagship white nationalist media outlet Breitbart on Thursday, Blackburn addressed the burning question on the tip of every American's tongue: Is the country music industry going to be okay???

"When you talk about country music, and I know the left is all out now and trying to change country music and make it woke,” Blackburn insisted. “When I'm talking to my friends who are musicians and entertainers, I say, 'If we have a socialistic government — if we have Marxism — you are going to be the first ones who will be cut off because the state would have to approve your music.'"

That faint whirring sound you hear is Martin Niemöller spinning in his grave all the way in Germany.

Blackburn then invoked Taylor Swift, who famously endorsed her opponent Phil Bredesen in the 2018 elections. Clearly Blackburn is still upset about this, because, she continued:

Taylor Swift would be the first victim of that because when you look at Marxist socialistic societies, they do not allow women to dress or sing or be on stage or to entertain or the type [of] music that she would have. They don't allow protection of private intellectual property rights.

Really makes you think. Specifically, it really makes you think about the country music stars who have actually had their careers derailed over their political beliefs. Like that time the (now-formerly Dixie) Chicks were basically blackballed out of public life for years after denouncing the Iraq War and President George W. Bush during America's famously socialist stretch from 2003-2008. Good thing that sort of stuff doesn't happen under capitalism, right, Marsha?

Or, perhaps Blackburn is thinking about how Swift herself was legally barred from playing her own songs and had to re-record her own catalogue of music after a contentious IP battle with her former management and record label. My god, the scourge of Marxism strikes again! (As it so happens, Blackburn and Swift aren't entirely divergent when it comes to some types of copyright reform, which makes her criticism even dumber.)

Not that this new sparring match between Blackburn and Swift will really amount to much. Taylor will remain one of the biggest pop stars on Earth, and Marsha has at least four more years in office, if not more. This is Blackburn indulging in some classic conservative posturing over the latest MAGA-fied bogeyman of scaaaaary socialism. Can't wait to see what she'll be incredibly wrong about next.