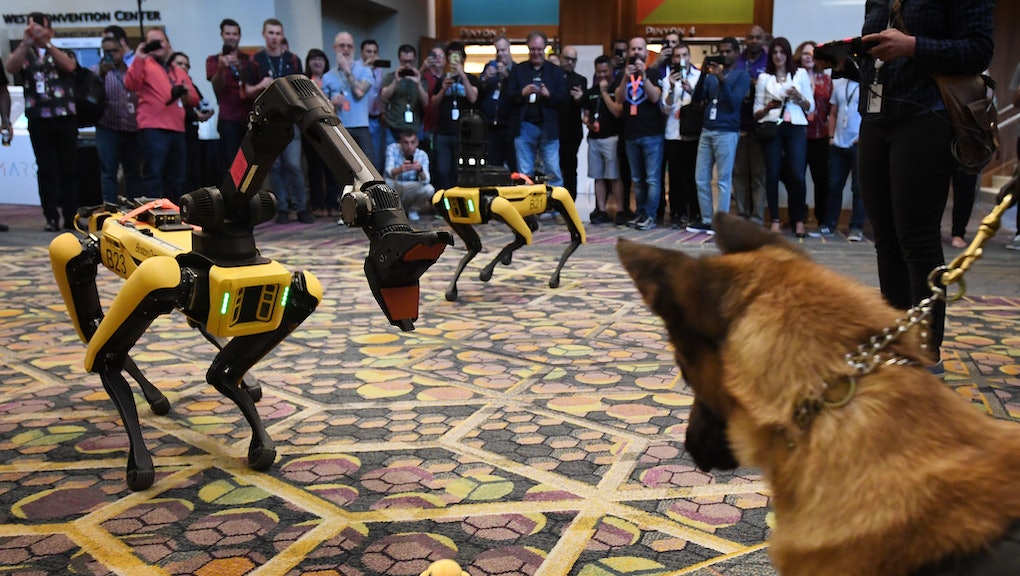 Believe it or not, robocops already exist, but what about robocop dogs? As technology continues to advance, law enforcement is looking to get their hands on new products. Recently, documents revealed that Massachusetts police leased a robot dog, Spot, and civil rights advocates are raising the alarm.

Documents obtained by the American Civil Liberties Union of Massachusetts show that the state's bomb squad loaned Boston Dynamics' Spot from August to November. You may not be familiar with the name off the bat, but you've probably seen Boston Dynamics' robots before.

In the past, the company's robots — which includes models that can do parkour, open doors, and more — been called "terrifying". In 2018, Mashable compiled a list of "5 times Boston Dynamics robots scared the hell out of us".

How terrifying Spot looks to you probably depends on how much you like dogs (and robots), but its use by police is a cause for concern. The documents didn't go into detail about what role the robot served, but a spokesperson told Engadget that Spot was used as a "mobile remote observation device".

“Robot technology is a valuable tool for law enforcement because of its ability to provide situational awareness of potentially dangerous environments,” state police spokesman David Procopio told WBUR, who first reported the documents.

Police also told WBUR that Spot was used in two real-world incidents, along with its testing. It's unclear what those incidents were, but since the bomb squad leased the robot it likely had something to do with that.

You can watch a video of some things that Spot is capable of below. In it, Spot climbs over dangerous terrain, shows off its 360-degree obstacle avoidance, opens doors, and more.

The thing about Spot is you can customize its software and give the robot a lot of free reign. Nobody knows how autonomous Spot was while being used by the police, although they say they did not customize the robot's software or weaponize it.

There are obvious concerns with the potential for police to use weaponized robots. However, Boston Dynamics told Gizmodo, "We’d like to stress again that our written license agreement with Spot customers does not permit use of Spot for any purpose that would harm or intimidate people."

Still, the robot's use by police concerns civil rights advocates. There's a lot of questions about how existing policies pertain to robots. For example, how do warrants apply when a robot is on the case? If a robot is allowed to act autonomously, where does the responsibility for violating a warrant lie?

Besides, police have already used weaponized robots. Dallas police used a bomb-laden robot in 2016 to kill a suspect, claiming there was no other option. At the time, futurist and defense technology expert Dr. Peter Singer described armed robots as the "latest tool to transition from the battlefield to civilian life".

"All too often, the deployment of these technologies happens faster than our social, political, or legal systems react," ACLU Massachusetts’ Technology for Liberty program director Kade Crockford told TechCrunch. "We urgently need more transparency from government agencies, who should be upfront with the public about their plans to test and deploy new technologies."