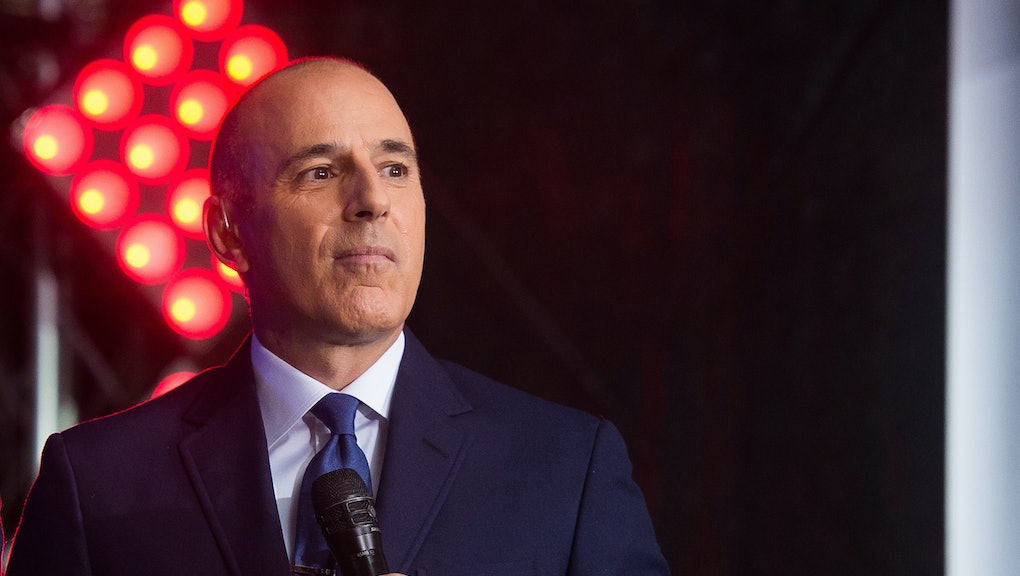 Ronan Farrow’s account of reporting the Harvey Weinstein scandal in 2017 is a thrilling read. For his book, Catch and Kill, Farrow tracked down and interviewed the private investigators Weinstein hired to tail him as he wrote his bombshell exposé for the New Yorker. They spent months staking out the reporter’s apartment and documenting his every move. Farrow knew he was being followed, and says in the book that it frankly freaked him out. But Weinstein’s espionage didn’t derail the story, and in October 2017, Farrow exposed the producer as a serial predator, helping fuel the #MeToo movement.

Perhaps the most harrowing story to emerge from Catch and Kill, however, involves another powerful man in the media industry — Matt Lauer, the former Today show co-anchor who was fired by NBC in 2017 for allegations of serial sexual misconduct. Catch and Kill reveals the identity of one of his accusers: Brooke Nevils, a former NBC News employee, told Farrow in an interview that Lauer anally raped her in his hotel room during the 2014 Sochi Olympics.

The details of the alleged attack are upsetting — please consider this a content warning.

According to Variety, who obtained a copy of Catch and Kill, Nevils was in Sochi working with Lauer’s co-anchor Meredith Viera. One night over drinks, they ran into Lauer. Six vodka shots later, Nevils wound up in Lauer’s hotel room, twice — once to retrieve her press pass and once because Lauer invited her back. The second time, Lauer answered the door in boxers and a t-shirt and pushed Nevils up against the door and kissed her. Then he pushed her onto the bed, flipped her over, and asked “if she liked anal sex,” Farrow writes. Nevils said no several times.

Nevils “was in the midst of telling him she wasn’t interested again when he ‘just did it,’” Farrow reports in the book. “Lauer, she said, didn’t use lubricant. The encounter was excruciatingly painful. ‘It hurt so bad. I remember thinking, Is this normal?’ She told me she stopped saying no, but wept silently into a pillow,” Farrow writes. When Lauer asked if she liked it, Nevils said yes, but told Farrow “she bled for days” afterwards.

Though Nevils was traumatized, she continued seeing Lauer back in New York. “What is not in dispute is that Nevils, like several of the women I’d spoken to, had further sexual encounters with the man she said assaulted her,” Farrow writes. “This is what I blame myself most for,’” Nevils told the reporter. “It was completely transactional. It was not a relationship.” She said she was intimidated by the control Lauer held over her career.

When Nevils changed departments at NBC, she reported Lauer’s behavior to her new bosses, but nothing happened until the fall of 2017, after Farrow’s article took down Weinstein. NBC colleagues started asking questions. Nevils went to Viera and recounted the whole story, and the horrified anchor sent her to HR with a lawyer. Lauer’s accuser’s identity stayed secret, but based on the limited possibilities of who could’ve been in Sochi with him and Viera, soon everyone at NBC knew it was Nevils. Work became hell, she took a leave of absence and eventually accepted a seven-figure payout.

NBC tried to hush things up and play down Lauer’s misconduct. Farrow writes that after Lauer was fired, Noah Oppenheim, the president of NBC News, and Andrew Lack, the chairman of NBC News and MSNBC, “were emphasizing that the incident hadn’t been ‘criminal’ or an ‘assault.’” NBC proposed having Nevils read a script praising the network, saying “she was treated well, and that NBC News was a positive example of sexual harassment,” according to Catch and Kill. NBC called Lauer’s behavior “inappropriate” in a statement at the time of his firing.

In light of Nevils’ vivid account, the network has no choice but to face the allegations. NBC used far stronger language in a statement released Wednesday: “Matt Lauer’s conduct was appalling, horrific and reprehensible, as we said at the time,” NBC News said. “That’s why he was fired within 24 hours of us first learning of the complaint. Our hearts break again for our colleague.”

Lauer penned a long letter, obtained by Variety through his lawyers, asserting his innocence and going into graphic detail about his affair with Nevils, which he claims was entirely consensual.

Current Today show anchors Savannah Guthrie and Hoda Kotb addressed the new revelations in a somber segment on Wednesday morning. “I feel like we owe it to our viewers to pause for a moment,” Guthrie said. “This is shocking and appalling. I honestly don’t even know what to say about it. I want to say, I know it wasn’t easy for our colleague Brooke to come forward then, it’s not easy now and we support her and any women who have come forward with claims. And it’s just very painful for all of us at NBC and who are at the Today show. It’s very, very, very difficult.”

“Truth be told, Savannah and I did a little prayer upstairs before just to sort of sort out what we were going to do,” Kotb said. “I think you feel like you’ve known someone for 12 years. I don’t know if you guys have ever felt like that. You know someone, you feel like you know them inside and out and then all of a sudden, a door opens up and it’s a part of them you didn’t know.”

“We are disturbed to our core,” Guthrie added.