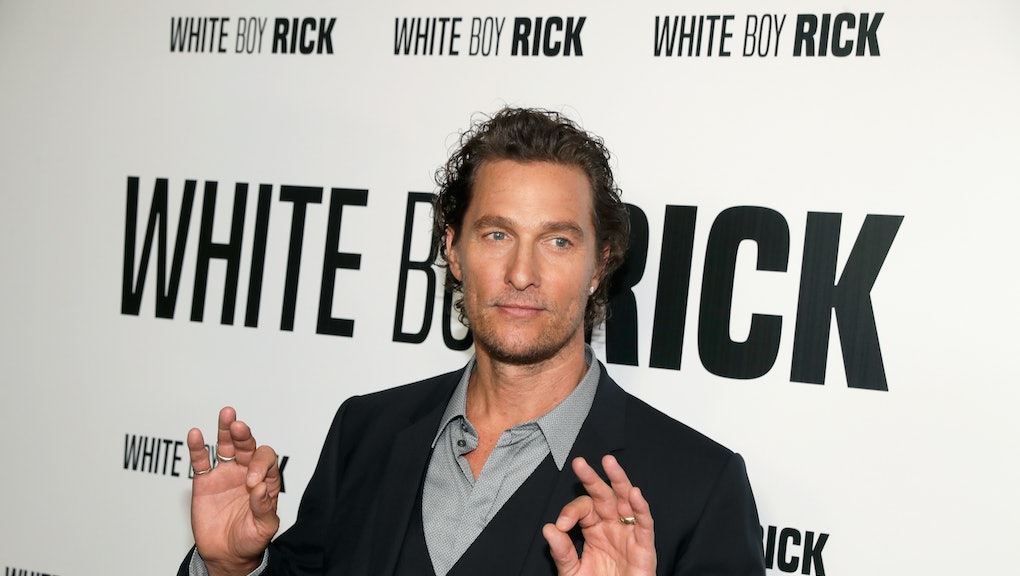 Matthew McConaughey wants everyone to get "aggressively centric"

These are the facts: Joe Biden won the presidency, and Donald Trump will have to vacate the White House in 40-odd days, but he’s thus far refused to acknowledge that reality. Instead, the man who vowed to Make America Great Again is whipping his still sizable base into a frenzy with unhinged claims of election fraud, jeopardizing the stability of our democracy and putting government officials in danger. Alt-righters have been sending death threats to politicians (even Republican ones) who say the election was valid. It’s a huge, embarrassing mess and a stain on the nation. But if you ask Matthew McConaughey (and no, we’re not sure why you’d ask him, either) it’s Hollywood elites who are the real problem.

Last week, the True Detective star and spokesman for Lincoln automobiles went on Russell Brand’s podcast, grossly titled Under the Skin, and proceeded to… get under people’s skin. You see, McConaughey argued that coastal elites need to be nicer to Trump supporters, who’ve had their egos bruised by his loss, suggesting it’d be hypocritical for liberals to expect MAGA-ites to give up on challenging the president-elect’s win.

“Many people in our industry, when Trump was voted in four years ago, they were in denial that it was real. Some of them were in absolute denial,” McConaughey said. “[Now] it looks like Biden’s our guy. Now you’ve got the right that’s in denial, ’cause their side has fake news. And I understand, they’ve been fed fake news. No one knows what the hell to believe, right? So they’re putting down their last bastion of defense.”

These obviously aren’t parallel situations. Liberals were devastated by Trump’s win, sure, but Hillary Clinton still conceded on election night and Barack Obama graciously cooperated with the transition to the new administration. Nobody plotted to kidnap any governors or staged unhinged legal challenges to the results. I get why McConaughey would make an appeal for compassion and moderation (he’s reportedly dipping his toes into a run for Texas governor, himself). But the famous actor’s finger-wagging makes him look like a hypocrite, instead.

Naturally, the “woke” hoards on Twitter had a field day with McConaughey’s unsolicited opinion. “Let’s get aggressively centric. I dare you,” is another one of the dumb things he said on Brand’s podcast. Firstly, the word he’s looking for is “centrist.” Secondly, we can’t think of a stupider, ruthlessly vanilla, completely privileged thing for him to say.