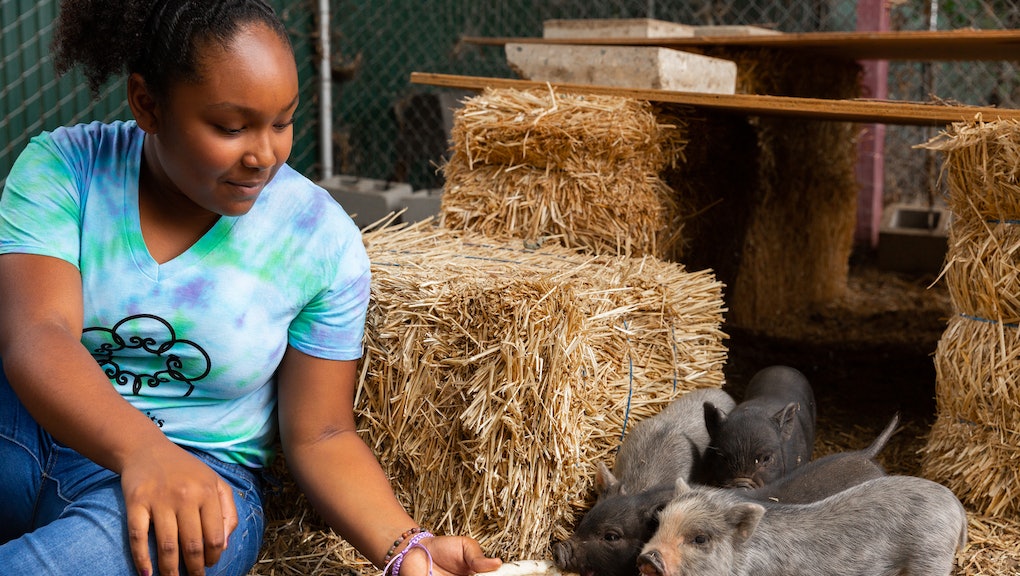 Meet Genesis Butler, the 13-year-old activist with a plan to save the earth

While much of the country took up tie-dye and bread baking when the pandemic hit, 13-year-old Genesis Butler launched a global youth movement to discuss the impacts of animal agriculture on climate change. Now, Youth Climate Save boasts more than 70 chapters in places as far away as India and the U.K. Its members hold weekly Zoom meetings to plan fundraising and other actions youth can take online, as well as an upcoming vegan support group. A sense of urgency animates Butler, who cites research on how a shift to veganism can fight climate change. “That’s basically what I’ve been focusing on, just talking about how if we don’t start going vegan, we’re not going to have a planet,” she says with sobering, wide-eyed earnestness.

Butler speaks with Mic over Zoom from her mom’s house in Long Beach, California. When she excuses herself mid-conversation to tell her younger siblings to be quiet, earbuds in her ears, she seems like any other teen, but she conveys conviction far beyond her years.

Besides Youth Climate Save, the vegan activist founded Genesis for Animals, a nonprofit that helps fund animal sanctuaries, when she was only 11. By speaking out against the mass production of animals, she seeks to create a world where all creatures can thrive. More broadly, her work reflects Gen Z’s collective anxiety over the very real possibility that the most devastating effects of climate change could unfold in their lifetime.

Worldwide, 70% of people are reducing their meat consumption or spurning meat altogether, according to a report by learning and data analytics company GlobalData, referenced by Forbes. Many cite health reasons for following a plant-based diet, as well as concerns about the inhumane conditions at factory farms, responsible for 90% of the global meat supply, per the Sentience Institute. Then there are all the environmental impacts of animal agriculture, including greenhouse gas emissions, the clearing of forests for grazing and growing feed crops, and the pollution of communities of color. Factory farms may even birth the next pandemic, Vox reports.

Butler became a vegetarian at age three, when she asked her mom where chicken nuggets came from. Initially, her mom responded that they came from the grocery store. Unsatisfied, Butler pressed her mom until she explained that chickens needed to be killed to produce them. “I was devastated,” she recalls. She forayed into veganism three years later, after she saw her mother nursing her younger sister, which made her wonder about the origins of the milk she drank. Her mom explained that it came from mother cows, which Butler then compared to people taking her mom’s milk to give to people other than her baby sister. “I never thought of it that way,” her mom told her. Butler went vegan, and her parents and three younger siblings followed suit.

The six-year-old had reached a crossroads, though. Gymnastics consumed all her time, especially now that she’d started training for the Junior Olympics. But activism called her. Eventually, she gave up gymnastics to focus on activism.

The response to the TEDx talk she gave at age 10, urging people to consider the environmental impacts of meat consumption, affirmed her choice. She began gaining a following, receiving invitations to speak “all over the place,” she says. “I thought, ‘This is what I’m here for.’” That realization took time, though, especially for someone who considers herself “very introverted,” but she’s learned to adapt. And activism runs in her blood: César Chàvez is her great grand-uncle. Learning about how he continued protesting, even when people threatened to call the cops on him, inspired her. “It just influenced me to be brave and not really care what people think.”

After Butler went vegan at age six, she started visiting animal sanctuaries, which offer refuge for animals who can’t survive in the wild. Her favorite is New Life Animal Sanctuary in Lake Elsinore, California, where the animals are rescued from labs and slaughterhouses. “The animals are so trusting and sweet, even after everything they’ve been through.” Two years ago, after talking to owners about the staggering financial costs of running a sanctuary, Butler started Genesis for Animals to raise funds for animal care at sanctuaries, including food, shelter, and veterinarian visits. She donates the money she earns from speaking events, and a link on her nonprofit’s website allows others to make tax-deductible donations. “It’s mainly just me,” she says of Genesis for Animals. “My parents will help me if I have any questions.”

She tells Mic that her ultimate goal for her nonprofit is to keep fundraising so sanctuaries can continue taking in animals, especially as more slaughterhouses shut down due to coronavirus outbreaks. Many argue that closing slaughterhouses leaves droves of animals with nowhere to go, but Butler believes this ignores a larger problem: the mass production of animals. “If they’re not mass produced anymore, then we wouldn’t have as many as we have right now,” she says.

To tackle this deeply entrenched practice, Butler discourages people from buying meat. “People are voting with their money, so when you’re buying meat, you’re basically saying it’s ok to kill animals,” she explains. She owes the recent proliferation of vegan meats and other products to consumers increasingly saying “yes” to them. To justify their meat purchases, some people say “'It’s humane, it’s grass-fed,'" she explains. But “there’s no such thing as humane meat. You can’t kill animals and say it was ok, because no animal wants to be killed.”

Butler has seen a glimpse of what animals experience in their final moments while attending pig vigils outside the Farmer John slaughterhouse in Vernon, California, where activists greet trucks loaded with pigs before their death. “When you look at their eyes, they’re really scared,” she says. Friends she’s taken to pig vigils have since stopped eating meat. “If you saw these animals before they died, you wouldn’t eat them anymore.”

To Butler, animal welfare isn't that complicated. "I think animal welfare is just being fair to animals and treating them how we want ourselves to be treated." And its importance resides in what we share with them: certain physical features, personalities, emotions. "They just want to be loved like me and you," she says. "We don't give them credit for what they have to go through."

Recently, Butler was immortalized as a vegan superhero on Disney +’s Marvel Hero Project, an animated series featuring young change makers. “They gave me my own episode,” she says. “That was also really cool since I am a person of color.” She believes it’s important for other young BIPOC to see her engaged in this work, since it can inspire them to do the same. “I think veganism is thought of as a white thing or thing for hippies to do, but it’s not,” she says, pointing to her own indigenous, Black, and Mexican ancestry. “There are people of all races and backgrounds who are vegan.”

These days, Butler has been busy with online high school classes, cleaning her room, and responding to Instagram comments, story replies, and DMs, often from people seeking advice on shifting to veganism. One of Youth Climate Save’s projects is to create a support group for youth who want to go vegan and/or get their families to do so, which will include tips, recipes, and other resources, and launch sometime this month, she tells Mic.

Indeed, Gen Z appears to be embracing the plant-based lifestyle more than previous generations. “I think this generation is talking about veganism now because it’s the easiest thing we can do about climate change,” Butler’s explains. “Adults are talking about [veganism] a little bit, but not as much as they should, so youth are stepping up and doing it.” Her words carry the weight of an existential crisis that teenagers like Butler shouldn’t have to grapple with, the result of systems established long before they were even born.

When asked where she sees herself in five years, she responds that she’ll be in high school; she’s unsure about attending college, since she already knows she wants to run an animal sanctuary. She also hopes that by then, all animals can live freely, and more of us will start going vegan.

After all, she notes, five years is a long time — a comment that might make us old-timers smile, until you remember it accounts for nearly half of Butler’s life, and that the we’re seeing the devastating impacts of climate change right now. With an unsettling matter-of-factness, she describes the sun’s deep red hue and the ash falling from the sky where she lives, due to the blazes engulfing the West Coast, whose unprecedented scale experts have attributed to climate change.

“We’re running out of time,” she says. “I’m trying to do something about it now before it’s too late.”

More like this
Having a bad trip? This hotline can help you find your chill
By Melissa Pandika
Ancestral healing could be key to decolonizing therapy
By Melissa Pandika
The benefits of rose tea, explained
By Tracey Anne Duncan
Stay up to date