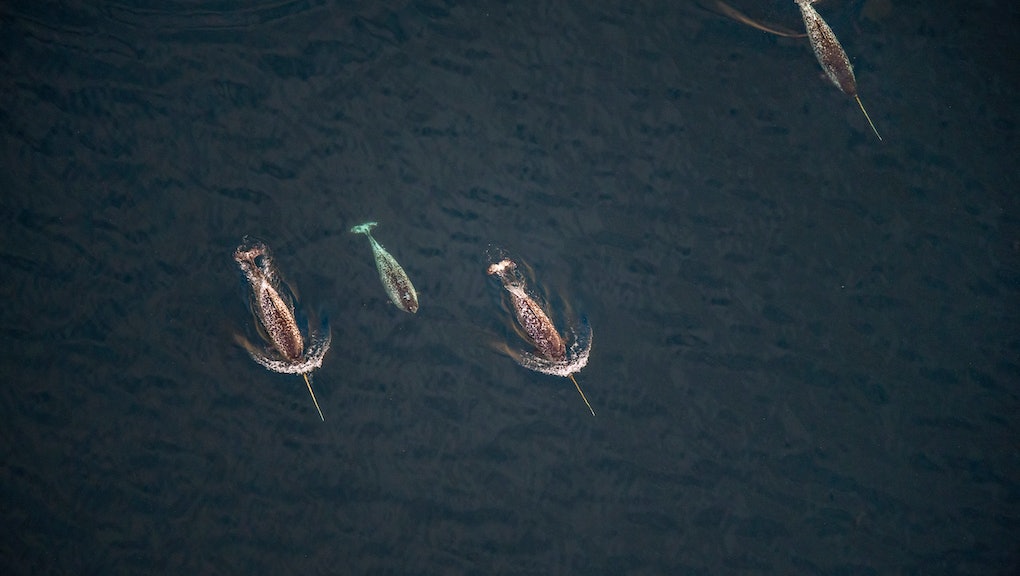 Meet the narwhal, ‘unicorn of the sea’

Narwhals are often called the unicorns of the sea. The long tusk of the male narwhal sets these whales apart, but it’s not the only thing that makes Monodon monoceros among the most intriguing and mysterious marine mammals.

A deep-diving cetacean in the odontocete family (which means “toothed whales”), narwhals live in cold Arctic and sub-Arctic waters. They’re highly adapted to living in areas almost completely covered with sea ice. Narwhals are among the only whales that live in areas with such dense sea ice cover for up to six months each winter.

As a scientist who studies animal ecology in the Arctic, I know firsthand that seeing a narwhal in the wild is a special experience. They usually travel in pods and can be quite sneaky. When they pass by, you may only see a small sliver of their mottled black and white skin above the water when they surface to breathe. No wonder glimpses of these whales and their unique tusks have fueled myths for centuries.

The tusk that is the narwhal’s claim to fame

Unlike all other toothed whales, the narwhal actually has no teeth in its mouth. Instead, the male develops a long straight tooth, called a tusk, that protrudes 6 to 10 feet out of his upper left jaw. A long tusk on an adult male can be more than half the usual total body length of about 16 feet. The tooth grows in a counterclockwise spiral – nature’s only spiral tooth.

The tusk is essentially unique to male narwhals. Very rarely, a female will grow a tusk, or even more rarely a male narwhal will grow two. Tusks exported from the Arctic, perhaps by the Vikings, reached Europe, the Mediterranean and even the Far East as early as the Middle Ages and became the source of the unicorn myth. The tusks were sold to the very rich without a good description of the animal from which they came and inspired a great deal of fantasy.

To some extent, tusks still inspire fantasies, as people have proposed many unsupported explanations for their purpose – whether breaking ice, sword fighting with other whales, spearing or smacking fish for food, sensing temperatures or digging in the bottom the sea.

One thing is clear: The tusk cannot serve a critical function for narwhals’ survival, because females, who do not have tusks, live just as long as males. And they do it surviving in the same harsh areas, finding the same food and additionally being responsible for reproduction and calf-rearing.

The tusk is a sexual trait, much like the antlers of a stag, the mane of a lion or the feathers of a peacock. Males use the tusk to determine social rank and compete for females. It is not entirely clear how this works, but male narwhals may be able to visually size each other up as competitors; they may interact with their tusk with some unknown level of aggression underwater; or possibly a female could use the tusk as a visual signal for choosing her mate.

During the summertime in the northern Arctic bays and fjords, male narwhals can be seen interacting at the surface, carefully crossing their tusks and touching them together. Such behavior might help adult males compare themselves and maintain dominance hierarchies. Or perhaps it helps young males nearby learn skills necessary for performance in adult sexual roles.

Living in a changing Arctic

Narwhals’ extensive migrations follow the formation and retreat of annual sea ice. Some can travel thousands of miles in a single year.

The over 100,000 narwhals worldwide today are divided into subpopulations of between a few thousand to up to 30,000 animals, based on where they spend the summer, in ice-free bays and fjords or at glacial fronts. In autumn, they migrate to overwintering areas that are deep, offshore and ice-covered, usually along the continental slope. Most feeding takes place in winter, and then females give birth in spring.

During the winter months in the dense pack ice, narwhals can make dives that are over a mile deep, sometimes swimming upside down as they descend into pitch black water. They sometimes seek prey close to the bottom, such as Greenland halibut, and swallow them whole.

Narwhals are part of an Arctic environment that is rapidly changing. The region is warming twice as fast as the rest of the world – 1.35 degrees Fahrenheit (0.75 degrees Celsius) in the last decade alone. By comparison, it’s taken the Earth as a whole the past 137 years to warm by nearly the same amount, 0.8°C.

In order to understand how narwhals may or may not adapt to the climate change in the Arctic, it is vital to develop a basic understanding of their ecology. Furthermore, narwhals are an important cultural, nutritional and economic resource for native communities in Greenland and Canada. My colleagues and I are continuing to study the structure and dynamics of narwhal populations in a changing climate, in hopes we can conserve their populations and ensure they remain sustainable biological resources.

This article was originally published on The Conversation by Kristin Laidre. Read the original article here.