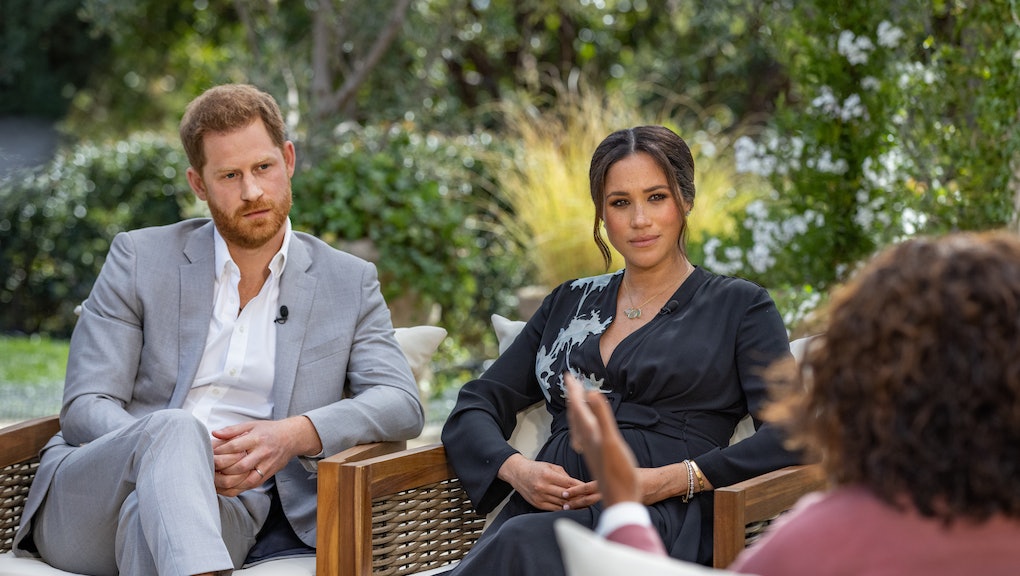 Meghan Markle and the pernicious myth of the Black woman bully

During a chilling interview with Oprah Winfrey on Sunday evening, Meghan Markle revealed what she says is the truth behind the persistent rumor that she made Kate Middleton cry. Previously, numerous British tabloids had reported that the Duchess of Sussex was responsible for tormenting her future sister-in-law to the point of tears weeks before the Royal Wedding, when actually “the reverse happened.” In a heated discussion about Princess Charlotte’s bridesmaid attire, Markle says she was the one brought to tears, explaining that Middleton even apologized for her actions with a note and flowers. Yet the media portrayed the Duchess of Cambridge as the victim, despite her role as the perpetrator. Moreover, a public apology by Middleton was never made, the U.K. rags never corrected their headlines, and Markle was expected to stiff-upper-lip-it through the ordeal.

So it comes as no surprise that recent allegations have labeled Markle as a bully, given the unending scrutiny she’s received from the British media. According to The Times’ report, Markle was said to have fostered a hostile environment, causing two aides to depart while undermining the confidence of another. In last night’s highly anticipated interview with the Duke and Duchess of Sussex, Markle opened up about the latest accusations, detailing her experience of being bullied by both the Royal Family and British tabloids throughout her entire relationship with Prince Harry.

A lethal combination of consistent public scrutiny, lack of support from the family’s human resources department, and direct racist remarks led Markle to develop suicidal thoughts, only to be gaslighted and denied help. Unfortunately, Markle’s experience of being unsupported, disbelieved, and labeled the aggressor is not uncommon for Black women, especially in professional settings.

“I'm a Black woman and what they claimed to want is the perspective of a Black woman. But, when I gave it, I was labeled as aggressive and intimidating,” Tyson said.

When Nikki Tyson, a 28-year-old attorney in New York City, was approached by her company’s new, internally hired diversity and inclusion director last summer to provide a list of organizations the company could donate to, she handed in an extensive report detailing grassroots organizations doing important work. Despite being approached after hours and uncompensated, Tyson was expected to turn in something immediately, only to be told that the organizations on her list were too political.

“She said she was looking for organizations that were less divisive and I told her that was the issue with our original response to George Floyd’s murder, and that race isn't a political issue,” Tyson explains to Mic. She recommended the company take a pro-Black stance rather than the same middle-of-the-road stance that led to internal backlash earlier in the year.

Shortly after the conversation, which Tyson claims happened strictly over Slack, she received an email from her boss, the vice president executive and general counsel of the company, notifying her that the diversity and inclusion director had found her to be overbearing.

“I felt it was unfair that instead of speaking directly with me, or even an HR representative, she went to an executive at our company who was also my boss and the head of legal department to talk about a personal interaction that she had with me, that I was doing as a favor to her, because she wasn't trained to do the role that she was hired into,” Tyson says, noting that the diversity and inclusion director was a non-Black woman who didn't have a personal connection to the task. “I'm a Black woman and what they claimed to want is the perspective of a Black woman. But, when I gave it, I was labeled as aggressive and intimidating,” adds Tyson.

The lack of support from those whom she trusted, combined with stereotypical labels, resulted in tension and a toxic work environment, ultimately pushing her to leave the company altogether. Similar to Markle’s exit from the Royal Family after pleading for support and being aggressively mislabeled for even the most innocent actions, Tyson felt she was left with no other option. Tyson and Markle's issues in the workplace are routinely faced by Black women, who can be labeled angry and aggressive by their non-Black counterparts, even when no signs of aggression or anger are present. But in a world mostly run by individuals with deep-rooted unconscious biases, stereotypes of hostile Black women too often prevail over reality.

In a 2020 Forbes article detailing common microaggressions toward Black women that non-Black colleagues often play a complicit role in, writer Bianca Barratt states that the angry Black woman stereotype is “enforced by a white privileged agenda to stamp out their voices and keep them quiet. Often labeled aggressive or over-assertive, Black female professionals are regularly subjected to tone policing — a silencing tactic used by oppressors throughout history.” In Oprah with Meghan and Harry: A Primetime Special, the Golden Globe-winning host asked Markle if she was “silent or silenced” after discussing why she never came forward with her mistreatment, to which Markle responded, “the latter.”

By bypassing Tyson and instead addressing the issue directly with her boss, and then claiming that she was aggressive and intimidating, the diversity and inclusion director not only silenced Tyson but played part in an age-old form of policing of Black women. The recurrence of these scenarios suggests that even some of the most self-proclaimed progressive individuals lack awareness of their own unconscious biases and how they contribute to a racist system.

Like Markle, a mixed-race Black woman, who said she was held to a different standard than Kate Middleton, a white woman, many Black women report experiencing this same double standard at work. When Germaine Pentsil, a 30-year-old HR team lead in Detroit, was tasked with re-training an employee after a leave of absence, a lack of improvement in work efforts led Pentsil to seek the advice of her supervisor, who suggested speaking directly with the employee.

Her boss’ decision to take an underperforming employee’s side over someone in HR who is tasked with providing feedback, doesn’t surprise Pentsil, who believes Black women hold very little control in how they’re perceived by non-Black people at work.

A few days later, Pentsil’s boss returned with unexpected feedback regarding the conversation, stating that the employee got really upset and felt misunderstood, claiming that Pentsil was intimidating, not warm or inviting, and that she was scared of her. “I was completely taken off guard because the feedback that I gave to my boss was not directly from me but was gathered as a team effort,” Pentsil says. “The problems were performance-based and were clear concerns that other people in the office had voiced as well.”

Pleading with her supervisor for support, Pentsil was advised to “clear the air” with the employee and try being more approachable. “I feel like I'm held to a much higher standard than my white counterparts who clearly do not perform at the level they're expected to, but they're given passes or they write it off as just, ‘Oh, let's just give it a couple of days and see how it goes,’” Pentsil tells Mic, detailing the minute there's even a hint of a mistake or that she is not performing to the best of her ability, she receives long, drawn-out emails from her boss or is asked to chat about the concerns. Her boss’ decision to take an underperforming employee’s side over someone in HR who is tasked with providing feedback, doesn’t surprise Pentsil, who believes Black women hold very little control in how they’re perceived by non-Black people at work.

“I feel like it's the overall idea that there's no way that this white person could be the aggressor in this situation because there's this bias toward Black women in general being overly aggressive or intimidating,” she relates. “There's no way that this individual could be escalating the situation because Germaine as a Black woman, is the aggressive one, she's the one that’s intimidating,” she says, stating that white people are conditioned to belief in the victimhood of other white people.

Whether it’s lack of support from the Royal Family when the media is ridiculing your every move, or getting undermined by a boss when another employee is playing victim, Black women are too often left to fend for themselves and navigate obstacles white women could hardly fathom. By using her access to a large media platform like Oprah’s, Markle is not only telling her truth, but one that has a resonance with other Black women in the workplace. One can only hope that Markle’s revealing remarks can open the door to greater understanding of the uncontrollable scrutiny Black women face, simply from existing.

More like this
You can feel for Khloé Kardashian and also recognize she's part of the problem
By Kara Weisenstein
Hollywood producer Scott Rudin allegedly "relished in the cruelty" of abusing staffers
By Kara Weisenstein
'Exterminate All the Brutes' is a messy, ambitious documentary that ties together genocide, white supremacy, colonialism ... and Josh Hartnett?
By Nicholas Russell
Stay up to date