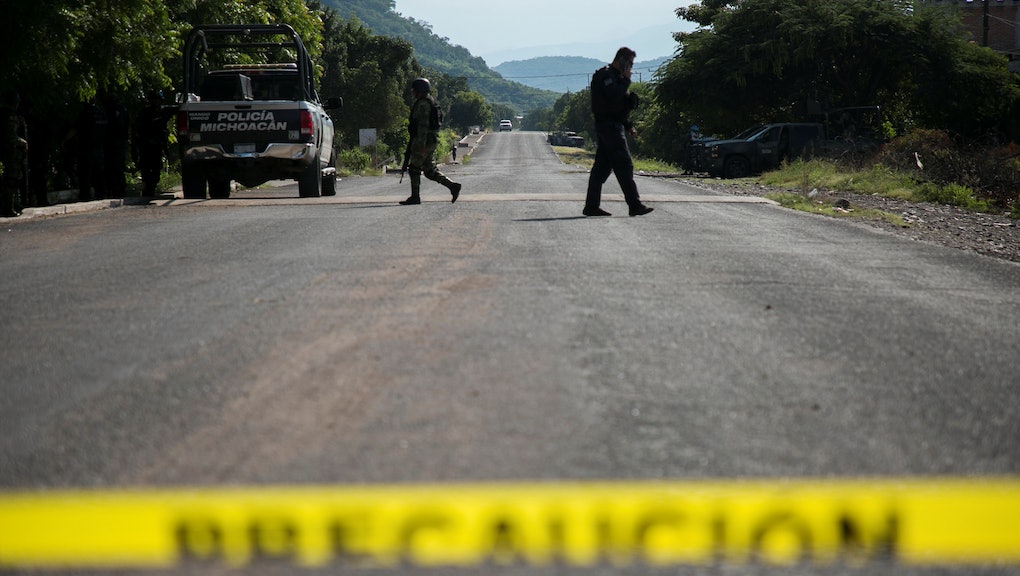 Joaquín "El Chapo" Guzmán might be fully locked away in America's highest-security prison, but that hardly means Mexico's drug wars are over. On Monday, members of the Jalisco New Generation Cartel attacked roughly 40 police officers in western Mexico, killing 13. The incident involved attackers ambushing a police convoy with high-powered rifles, per Vice News, and then leaving signed notes at the scene after the bloodshed was over.

The policemen were attacked by more than 30 people, per the state prosecutor in Michoacán state, where the ambush took place. Five "presumably armored" vehicles carrying CJNG (the Spanish acronym for the Jalisco New Generation Cartel) members surrounded the convoy shortly after 7:30 a.m. local time, the prosecutor said in a statement, at which point they opened fire. In addition to the 13 killed, nine officers were wounded while 20 more escaped harm.

Per Vice News, Michoacán has seen a "significant uptick in violence" since Mexican President Andrés Manuel López Obrador took office in December, succeeding President Enrique Peña Nieto. Obrador had vowed during his campaign to address the root causes of violence, like poverty, rather than use heavy force against drug gangs. Critics have argued that Obrador's "abrazos, no balazos" approach — "hugs, not bullets" — is naive given the history of intense violence, as well as the overarching profit motive, that drives cartels. CJNG in particular is known for its brutal tactics, training its members in paramilitary combat and flashing military-grade weaponry in videos.

The CJNG-branded notes left at the scene warned police not to cooperate with rival gangs, CNN reported. In the region where the attack took place, competing cartels are known to fight for control of smuggling routes and meth labs as well as leverage over Mexico's lucrative avocado industry, The Wall Street Journal noted. Other organizations known to operate in the area include the Sinaloa cartel, whose infamous boss Guzmán was arrested and subsequently extradited to the U.S., and the Knights Templar. CJNG reportedly operates at the direction of "El Mencho," a.k.a. Rubén Oseguera Cervantes.

Mexico has struggled for years to contain its drug-fueled violence, even after high-profile arrests such as Guzmán's. Vice News noted that just minutes before the attack, Obrador was speaking at a press conference about how his pacifist strategy against cartels was working, saying that "you have to fight evil by doing good."

"Minutes later," Vice News reported, "over a dozen police officers had been massacred."