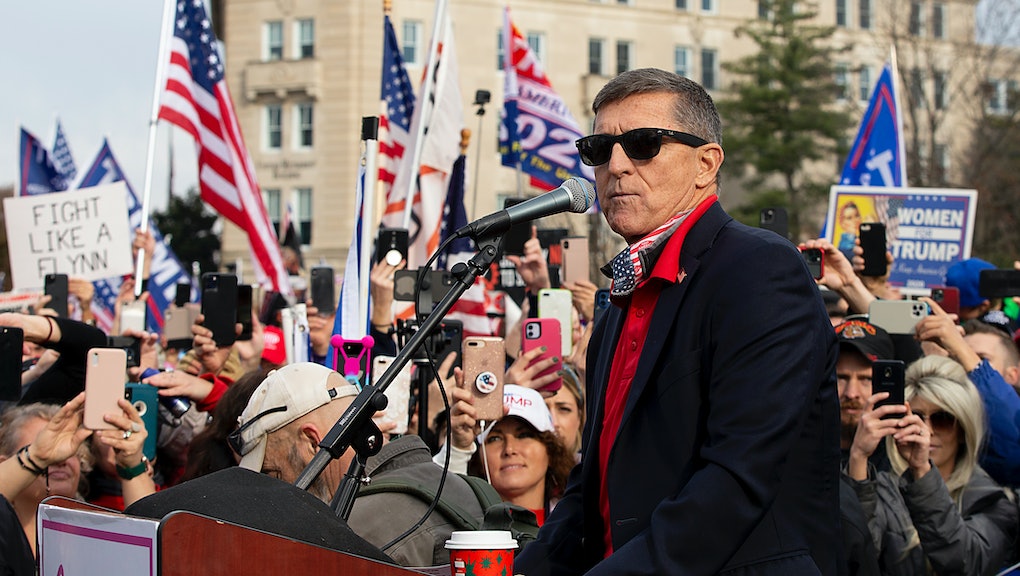 Former three-star general, Defense Intelligence chief, and National Security Adviser Michael Flynn has hardly been shy about his, erm, enthusiastic support for President Trump — all the more so after Trump pardoned him for lying to the FBI as part of Special Counsel Robert Mueller's investigation into the 2016 president election.

But even the QAnon-tinged extremism that's colored Flynn's political activism of late seems fairly quaint in comparison to his most recent interview with the ultra-right-wing Newsmax network — Trump's favorite post-Fox rebound date — in which he essentially advocated for a military coup to redo last month's presidential election.

"[Trump] could order, within the swing states if he wanted to. ... He could take military capabilities and he could place them in those states, and basically rerun an election each in those states," Flynn told Newsmax's Greg Kelly on Thursday, saying such a move wouldn't be "unprecedented."

To be clear: This is a former top military official who was, for a time, privy to the most sensitive national security information on Earth, essentially lending his patina of authority to the notion of a military coup to overturn the results of last month's presidential election. Not great!!!

"I'm not calling for that," Flynn added quickly, after noting that martial law has been declared in the United States more than 60 times (which, while technically true, slyly obscures the fact that it's only been declared nationally once, by Abraham Lincoln during the Civil War). Also notable was the fact that just the other week, Flynn attached his name to a press release calling for the very actions he'd just claimed to not endorse.

Flynn is hardly the sole right-winger to call for some sort of military intervention on behalf of Trump's aspiring dictatorship. Considering his pedigree, however, he is perhaps the most dangerous to do so.