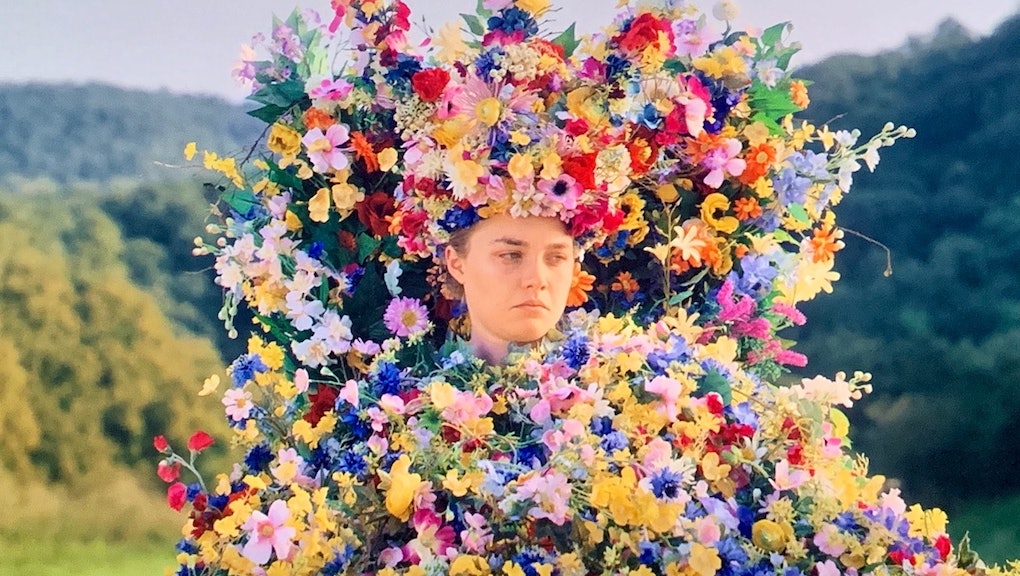 'Midsommar' and the cathartic power of horror right now

They should make more horror movies about breathtakingly gorgeous vacation destinations, in my opinion. For example, you could argue Jaws was pretty bad press for Martha’s Vineyard, where Stephen Spielberg’s 1975 classic was filmed. “Stay away from our beautiful island, guys. Nothing to see here but killer sharks, we promise.” (That angle hasn’t really worked, though. Decades later, Jaws still chums-up significant tourism dollars for the island.)

Similarly, last year’s indie thriller Midsommar could be construed as brilliant anti-propaganda for the Swedish countryside, which isn’t lovely at all and is definitely populated by murderous cults, please believe me.

Right around the time Midsommar came out in theaters last summer, I was in Sweden for a wedding. After the main festivities, a bunch of us Americans who’d made the long trip hung around with the bride and groom and their families at this remote Swedish summer camp way out in the boonies on the western coastline. We were there for the summer solstice, so naturally we participated in all the traditional midsummer celebrations — weaving our own flower crowns, dancing around the maypole, doing shots of aquavit and singing ABBA at the top of our lungs.

A funny thing happened when I started posting pictures from my trip on Instagram: my friends who’d seen Midsommar (or the trailer for it) were sending me messages like, “Are you okay???”

Of course I was okay. I was more than okay after frolicking in the midnight sun for nearly two weeks. But to be fair, my videos of blonde locals chanting pagan songs in Swedish did look a lot like footage from the film. That’s one of the things that makes Ari Aster’s horror flick so uniquely spooky, though: whereas most thrillers traffic in darkness and gloom, Midsommar is bright, colorful and visually stunning. It subverts lots of the Instagram-friendly aspects of Swedish culture and makes them sinister. It’s so freaky. I love it.

Despite basically living Midsommar (minus all the murder-suicide), I’d never worked up the nerve to see the film. But then the coronavirus pandemic hit. Maybe I felt compelled to finally watch Midsommar because with social-distancing and travel restrictions in place, there’s no way I’ll be able to visit Sweden again anytime soon. But quarantine has also whet my appetite for spooky content in a way I’d have never anticipated. When the health crisis first escalated in the US in early March, I didn’t really understand why people were gravitating towards pandemic fiction and watching Contagion in droves. But I think I get it now.

Scary movies can be weirdly comforting, especially in times of high stress. In a way, they’re reassuring — at least my reality isn’t that bad. There’s not a murderous clown lurking in my storm drains, devouring small children. I can be grateful for that.

Research backs up my anecdotal observations. According to Forbes, Small doses of “good stress,” where we know we’re not in any real danger, can be an effective way to undermine anxiety and bolster our resilience to life’s struggles. Watching a horror film is a perfect example of this. Each jump-scare and gory fictional death is a little fear inoculation that strengthens your emotional response against bigger threats.

As twisted and upsetting as the events in Midsommar are, the movie offers incredible catharsis, both for viewers and its main character, Dani. From the film’s opening scene, she’s subjected to real-life horror after horror. Her sister and parents are killed in a gruesome murder-suicide. Her boyfriend Christian is an emotionally abusive lump who jumps at the first chance to cheat with a Swedish maiden. Compared to that, the ritual sacrifices Dani witnesses in Hårga are shocking, even morally wrong. But after everything she’s gone through, she almost can’t be bothered.

The same goes for us watching scary movies like Midsommar at home, kind of. Choosing to tune out reality and immerse yourself in a fictional and maybe-frightening story is a semi-radical act of self-care. Like Dani, looking like a floral volcano in her May Queen dress in the film’s final shot, we can feel freed from our troubles, just for a moment.

More like this
The unmatched power of Michael K. Williams
By Bonsu Thompson
The 8 best reality shows you're not watching, but should be
By Brandon Yu
Steve from 'Blue's Clues' gave us the closure we didn't know we needed
By Kara Weisenstein
Stay up to date