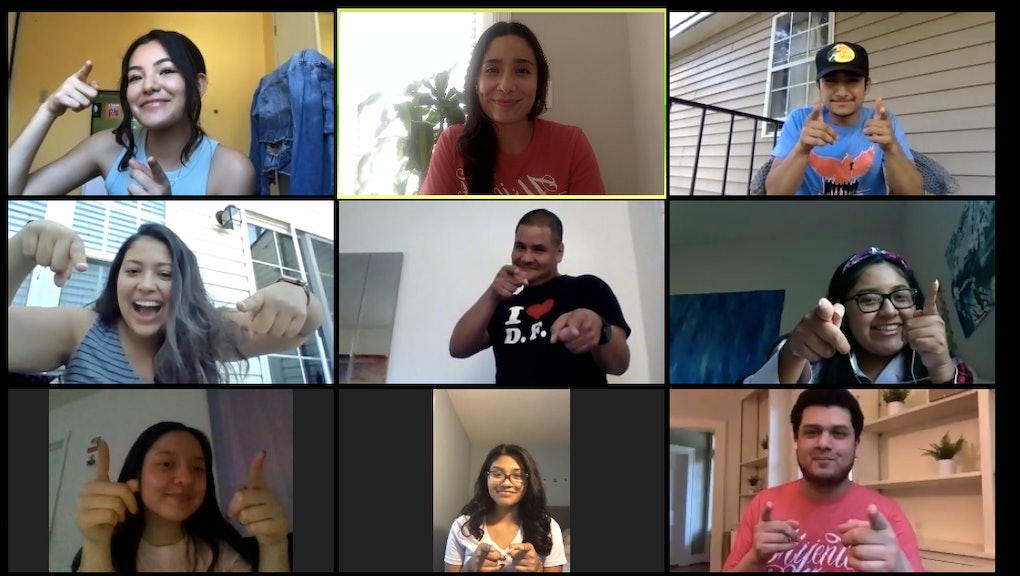 Mijente organizers on a Zoom call ahead of Voto de Mayo. [Courtesy Mijente]

Phone banking alone, and from home, is largely what political organizing will look like as long as coronavirus has a strangehold on American life. It's a fate that doesn't intimidate, but rather excites grassroots organizers with Mijente, a political hub for Latinx and Chicanx organizing. Mijente sees this election year as an opportunity to accomplish two goals: engage the growing body of Latinx voters who aren't usually courted by candidates or political parties, and demonstrate to political bigwigs that Latinx voters can make the difference in the local and state elections, especially ones that are often assumed to favor Republicans.

In years not plagued by a global pandemic, Mijente would host a day of action on May 5 dedicated to in-person voter outreach. This year, however, Mijente's "Voto de Mayo" effort has moved online. Mijente has targeted two states in particular — North Carolina and Georgia — because there are viable Democratic candidates in races there, not to mention a significant population of Latinx voters with untapped political potential. Given that Mijente organizers can't go door-to-door to engage voters, individual phone bankers in cities around the country are going to call residents of those two states in an effort to turn out the vote.

Vanessa Aguirreche Snow, an organizer and Mijente member, says that she'll be hosting a video call from Boston, where she's based, for members to sign on to as they make calls into North Carolina and Georgia. During a typical phone banking session, volunteers would be in the same room, able to chat and get to know one another, so Aguirreche Snow is hoping to replicate that camaraderie online.

"As progressive Latinx folks in a blue state, we really want to be able to help make an impact in North Carolina and Georgia because we understand that these states are in play," Aguirreche Snow tells Mic. "Voto de Mayo is gonna be a really fun and interactive way for us to be fun and interconnected," she adds. Mijente started in 2015 as a digital hub whose network spanned the United States, she explains, so while the political moment is different now, the work really isn't.

The digital Voto de Mayo rally will build momentum and support for voter registration in the two states where, historically, Democrats have not focused on Latinx turnout, Tania Unzueta, Mijente's political director, tells Mic. In North Carolina, the Latinx population grew by 13.8% between 2012 and 2017, and the voting eligible population during that same period of time grew by half. There are about 1 million Latinx North Carolinians, per data compiled by the U.S. Census Bureau in 2019, which equals about a tenth of the state's entire population. But only about 218,000 of those people are registered to vote, according to the state's Board of Election records.

Mijente is focused on reaching eligible voters who may not have been targeted by the Democratic Party. Unzueta explains that a key part of this grassroots effort is showing Democratic institutions that Latinx voters are worth the investment. In states across the country, Latinx voters just aren't getting the support they need, nor are they given the attention that other voting blocs are.

It's a tricky mission, however, because as Unzueta describes it, there's a bit of a contradiction at play. In order to show they're politically interested, Latinx voters need to show up to vote, she says — but in order to attract their vote, candidates need to reach out specifically to these voters. State boards of election also need to make it easier for all voters to cast their ballots, whether by sending absentee ballots automatically or offering multilingual online registration. After all, as Unzueta explains, low participation begets low investment begets low participation.

Mijente wants to cut through this catch-22 by meeting Latinx voters where they're at and helping them to understand that gaining political power is a matter of showing up and taking it. "We're just not gonna get that [investment]," Unzueta says. "[We're] doing it ourselves."

Mijente is hoping to show Democratic leaders' the value of the Latinx vote through cold, hard results — aka, by significantly increasing turnout in North Carolina and Georgia. In the 2018 midterm elections, Hispanic and Latinx turnout increased nationally by 40%, which experts say was largely due to voters turning 18; in other words, a whole generation not only gained the right to vote, but showed up to exercise it.

The first step in engaging voters is registration. While both North Carolina and Georgia offer online voter registration, that requires access to internet, the knowledge of how to fill out a registration form, and the confidence that the information won't be used against you by the government; the latter is a particular fear given the Trump administration's anti-immigrant agenda.

A major barrier, too, is that online registration isn't available in Spanish. The lack of language access, Unzueta says, is another form of legal voter disenfranchisement Latinx and Hispanic voters have to work to overcome. "It just feels like there's so much that's being put on our communities right now," she says.

But as Latinx voter turnout continues to climb, Democrats tend to benefit: In the 2018 midterm elections, Latinx voters cast their ballots for Democrats 69% of the time, and the number goes up for younger Latinx voters. Increased Latinx turnout is even enough to make a red state look purple, Unzueta explains. "Over the last several years, Democratic contenders in Georgia have closed the gap between [Democrats and Republicans] statewide," she says. "It is really obvious to me there's a real chance for Georgia to be a strong state against [President] Trump."

From 2004 to 2016, the voting Latinx population in Georgia tripled. As the number of Latinx voters grew, so too did the number of organizers, many of whom showed up with Mijente in 2018 to try to push Stacey Abrams to the governor's mansion. Though they weren't successful — Abrams lost a fiercely contested election to Republican Brian Kemp, who was overseeing the race as the state's then-secretary of state — Geovanni Serrano, a Georgia-based Mijente volunteer, tells Mic that the midterm election was a victory in other ways. It was "one of the most amazing things, just to see my people taking part in this process," he says, adding: "We understand our community and we don't take our community for granted."

Serrano decided to get involved with Mijente after he graduated college in 2018, motivated to combat the racism he saw both in everyday life in Georgia and in the political system. He is used to canvassing and going door-to-door to have conversations with voters, but he'll be making phone calls for Voto de Mayo on Tuesday. He says the priority will be to make sure that Georgians understand the process of requesting an absentee ballot or registering to vote online. The day is part of a broader effort by Mijente to demystify voting and the importance of electoral work, he says.

In North Carolina, Mijente organizer Nikki Marín Baena hopes Voto de Mayo will reach younger voters in particular, who often come from families where voting is not a part of the culture or where their parents aren't eligible to vote. "If you're not coming from a background where people [vote] all the time," Baena tells Mic, you're less likely to vote yourself. She says that there are also "not a lot of great places to ask questions and find answers," and that her job as an organizer is to open up a conversation about electoral and political participation where there might not have been one before.

Part of the work now is translating the ideas of movement work — building support for issues, not candidates; strengthening community; pushing elected officials on specific interest areas — to electoral politics. Unzueta says that Mijente can do both, encouraging Latinx voters to make their voices heard as well as pushing all candidates on certain issues, regardless of whether they were Mijente's preferred candidate or not. In Georgia, for example, Mijente is educating voters on the importance of voting as it pertains to sheriffs' races, because sheriffs have immense power over the ways that individuals are treated by the court system and can also decide if or how to collaborate with Immigrations and Customs Enforcement for their locality.

Overall, the goal is to make clear to Latinx voters that they have electoral power, and they should use it. No one candidate is going to solve every issue, but every election is important.

More like this
Nancy Pelosi took a stand on the Jan. 6 committee, and it left Republicans whiny as hell
By Rafi Schwartz
Adam Kinzinger basically just outed his fellow Republicans as a bunch of cowardly phonies
By Rafi Schwartz
Ilhan Omar is leading a push for the State Department to combat Islamophobia
By Vanessa Taylor
Stay up to date