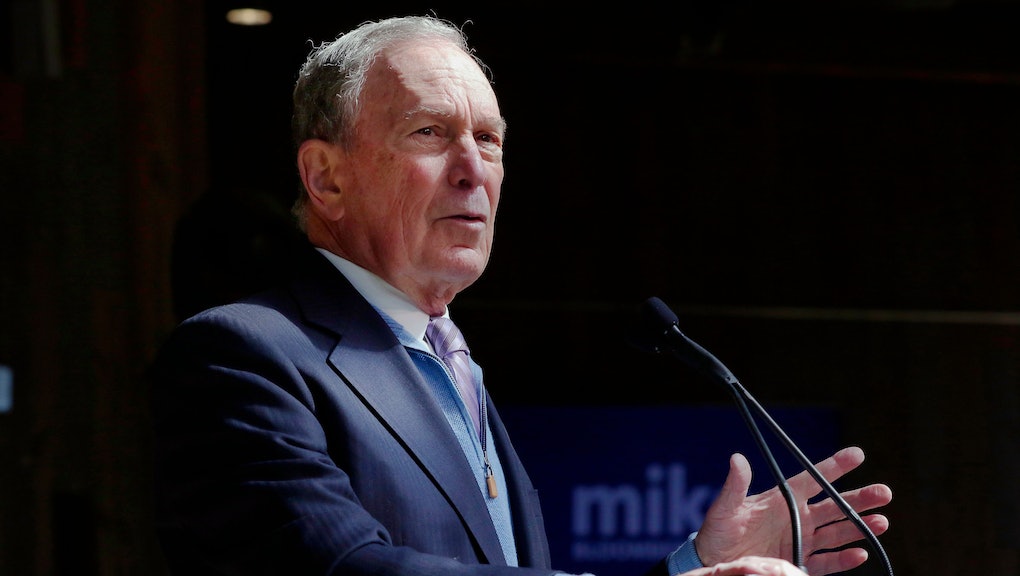 Throughout the tri-state area, Muslims experienced near constant surveillance after the Sept. 11 attacks. Much of it can be attributed to former New York City Mayor Mike Bloomberg, who is now running for the Democratic nomination for president. In a recent interview, Bloomberg doubled down on the surveillance of Muslims during his time as mayor. With Muslims already explicitly targeted under the Trump administration, Bloomberg's comments present concerns that he may continue the same trend.

During Bloomberg's three-term tenure as mayor, the New York Police Department deployed a wide range of tactics targeting Muslim communities. In 2011, the Associated Press published a series of articles outlining how the NYPD gathered intelligence on over 250 mosques, student groups, and more. The department collaborated with the CIA to deploy undercover agents as well as placed informants in mosques and kept tabs on just about everybody; NPR reported that an undercover police officer once accompanied a group of Muslim college students on a whitewater rafting trip.

Bloomberg and the NYPD's surveillance was not limited to New York City alone. In mid-2007, officers from the NYPD's Demographics Unit targeted Muslims in Newark, New Jersey, without authorization from Cory Booker, who was the city's mayor at the time. (Booker is now a Democratic senator for New Jersey and suspended his own presidential campaign last month.)

On Thursday, Bloomberg was pressed on his history of surveillance during an interview on PBS NewsHour. In response, Bloomberg argued that they were "very careful" and "authorities that looked at us said, yes you complied with the law," though NPR noted that no court ever declared Bloomberg's tactics legal.

"We had every intention of going every place we could legally to get as much information to protect this country. We had just lost 3,000 people at 9/11. Of course we're supposed to do that," Bloomberg said in defense of the surveillance program.

In the interview, he additionally described sending undercover officers into mosques because "there were imams who publicly at that time were urging the terrorism ... so of course that's where you gonna go." The mayor did, however, concede that "that does not, incidentally, mean that all Muslims are terrorists or all terrorists are Muslims. But the people who flew those airplanes came from the Middle East."

Bloomberg's assertion that his surveillance complied with the law is particularly alarming. First off, the law itself can be discriminatory, and it's not necessarily an indicator that what you're doing is right. That has been seen throughout American history (slavery was legal, for example).

Then in 2018, Hassan v. City of New York, a lawsuit filed by civil rights organization Muslim Advocates, reached a landmark settlement. The first-ever case brought forth by Muslims who were surveilled under the NYPD's programming, the settlement required that the NYPD stop all suspicion-less surveillance activities on the basis of religion or ethnicity.

Muslim organizations aren't the only ones calling out Bloomberg. On Thursday, fellow Democratic candidate Elizabeth Warren tweeted, "This moment in history calls on us to confront anti-Muslim policies and ensure they never happen again — not elect someone who defends bigoted practices." The Massachusetts senator has been fiercely attacking Bloomberg's record since his campaign ramped up earlier this month.

Over the past few weeks, Bloomberg has been on a bit of an apology press tour. He has issued apologies for both his notoriously racist stop-and-frisk policy as well as his transmisogynistic comments. Some are calling for apologies regarding his surveillance of Muslims, but would that even be enough?

Although Bloomberg is now running as a Democrat, he was a Republican during his stint as New York City mayor. In the 2016 Republican primaries, presidential candidates were quick to talk about how they would surveil Muslims, like President Trump's proposal to create a database. As noted by The Intercept, Bloomberg helped lay the foundation for those surveillance dreams.

The impacts of surveillance go beyond lawsuits or those specific moments in time. Constant surveillance affects your mental health. According to Vice, it can lead to symptoms similar to post-traumatic stress disorder, if it doesn't outright cause it. Surveillance makes people self-censor, afraid that any little thing can result in their name being added to some list. It makes communities feel as if they must constantly look over their shoulders. Bloomberg's tenure as mayor may be over, but Muslims are still living in the panopticon that he helped design.

More like this
Vaccines are good. Threatening to evict someone over them is not
By Rafi Schwartz
After 9/11, the U.S. leaned into security theater. Here's how that's playing out 20 years later
By Vanessa Taylor
Insurrection enthusiast and acid trip 'Batman' villain Roger Stone got served court papers on live radio
By Rafi Schwartz
Stay up to date