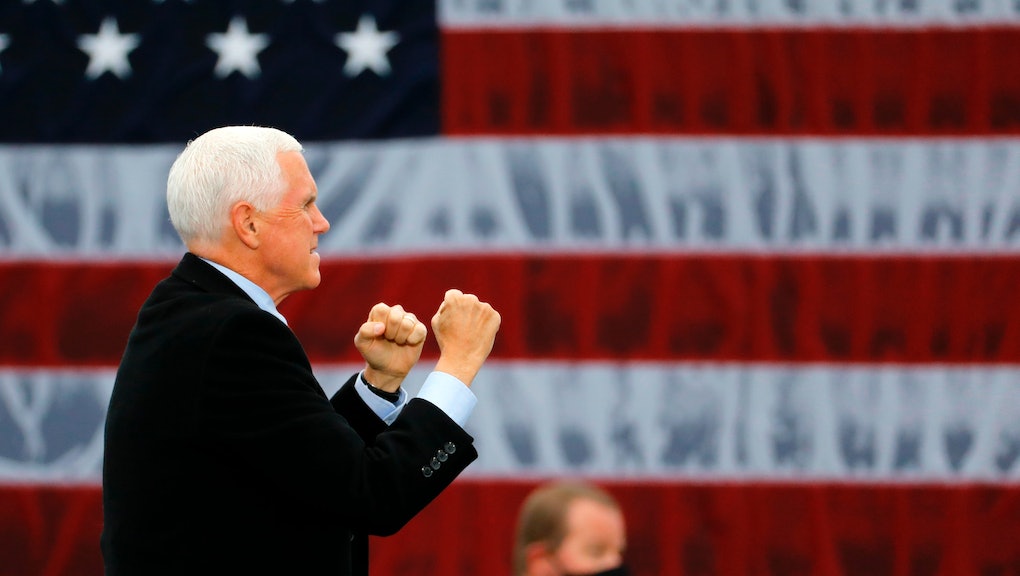 Vice President Michael Richard Pence is a big tough guy. He's glared at both Russian President Vladimir Putin and the entire country of North Korea. If you don't watch out, he'll fix his steely-eyed death stare on you, too. Except, not during the week of Jan. 6. He's probably gonna be busy then.

You see, while Pence may be a big tough guy, he's also apparently planning to conspicuously skip town for the bulk of President Trump's last full week in office — just hours after he presides over the certification process that officially cements Joe Biden as the next president of the United States, once and for all. No do-overs, no backsies.

That, at least, is the plan according to Politico, which reported Thursday that gears are already in motion for Pence to make a week-long trip to Israel, Bahrain, and Poland on staring on Jan. 6, the same day he's scheduled to preside over the final Electoral College certification session of Congress. Pence will oversee the session because as vice president, he is the president of the Senate.

Pence is not the only high-ranking Trump administration official to spend the last few weeks in office jetting around the globe. Secretary of State Mike Pompeo took a more-than-week-long international trip in the days immediately following the November election. Senior White House adviser and first son-in-law Jared Kushner has similar plans with a swing through the North Africa and the Middle East. But Pence's trip is notable not only for the fact that it's literally taking place during his last remaining days in power, but indeed because it conveniently removes him from shouting distance from a president who, it feels safe to say, will probably not be in a great mood when Pence presides over the last nail in his electoral coffin.

"By no means is this going to be an easy moment for the vice president or president to stomach," one White House official explained to Politico. Another Pence ally told the site bluntly: "I suspect the timing is anything but coincidental."

Of course, Pence's trip, if it happens, would still return the vice president to Washington with a few days left for him to get summoned into the Oval Office for a characteristically Trumpian chewing-out. But who knows? Maybe the president will have chilled out and accepted reality by that point.