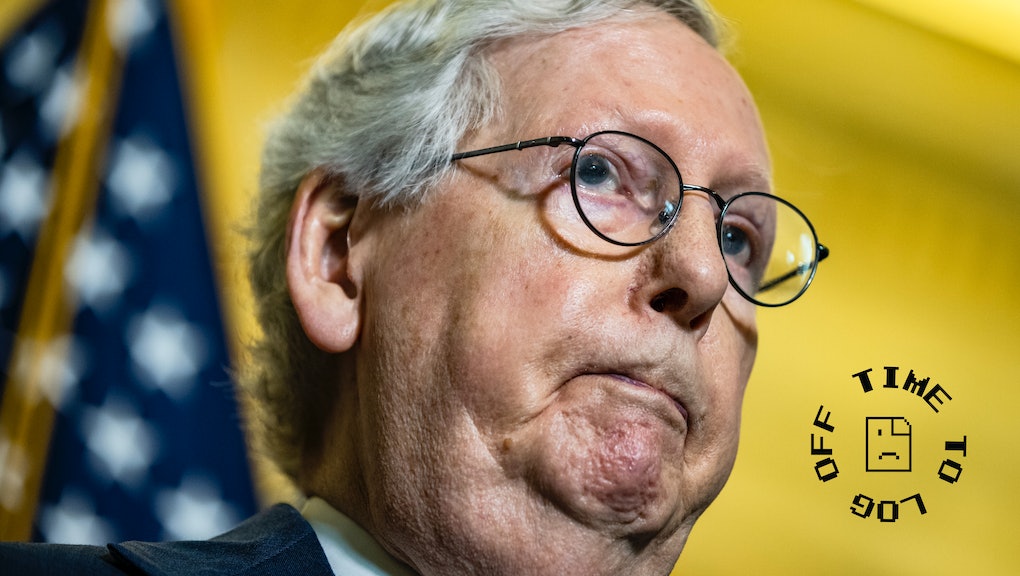 Senate Minority Leader Mitch McConnell is arguably the most consequential politician of the past century. In his decades as a lawmaker, McConnell has mastered the art of strong-arm politics to the point where even in with his party in the minority, he's still able to largely dictate and direct Senate business as he sees fit.

Nevertheless, Mitch is only human, and even he sometimes stuffs his foot so far in his mouth that he knows what his heel tastes like. Like this week, when he stood up in front of a group of his fellow Kentuckians and courageously took credit for trying to keep money out of their pockets.

Speaking in the city of Murray, Kentucky, about the $1.9 trillion American Rescue Plan signed into law by President Biden this spring, McConnell downplayed the massive bill, saying it "passed on a straight party-line vote."

"Not a single member of my party voted for it," he added. And then came the footsy-mouthy part:

"My advice to members of the legislature and others, local officials, is to spend it wisely," McConnell continued. "Hopefully this windfall doesn’t come along again."

Nice little federal stimulus package you've got there. Would be a real shame if something were to happen to it, huh?

As you can probably imagine, the Biden administration has been eager to leap all over McConnell's comments, with multiple White House staffers tweeting their approval for Mitch's accidental truth-telling.

The Democratic Party itself even turned the footage of McConnell's speech into a quick ad.

Of course, McConnell's opposition to the stimulus makes sense: He is, after all, a staunch conservative who fundamentally opposes any sort of federal action. This is simply the latest manifestation of that political inclination. But for someone as famously taciturn and deliberate as McConnell, that inclination sounds even more craven than his usual conservative bluster when he's telling the direct recipients of the federal stimulus package that, hey guys, I did everything I could to keep you from getting paid, and I'd do it again in a heartbeat.

I dunno, Mitch. It's been a rough couple of months for you, and you seem to be slipping up a little bit — at least on the optics front. Perhaps it's time you kick back, keep your head down, and log off for a bit.

More like this
Biden's idea of filibuster reform is to bring back painfully long and boring floor speeches
By Vanessa Taylor
Trump kept a Gitmo prisoner detained for 5 extra years. Biden has finally freed him
By Rafi Schwartz
More than 200 GOP lawmakers asked the Supreme Court to overturn Roe v. Wade
By Rafi Schwartz
Stay up to date