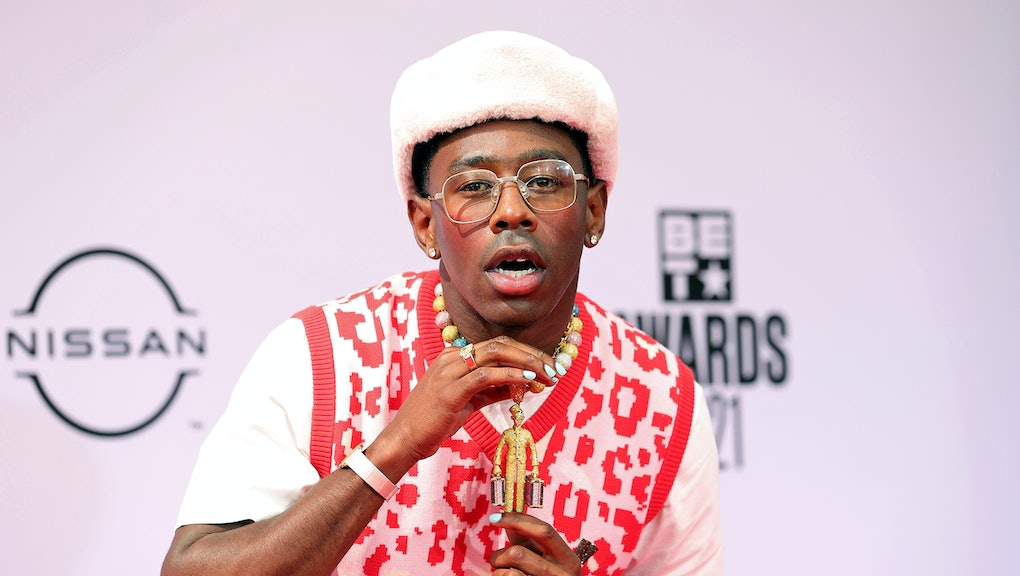 Money can't save Tyler, The Creator from heartbreak on 'Call Me If You Get Lost'

For at least the first half of his now ubiquitous career, Tyler, The Creator thrived as a self-made indie darling. Shunned by rap bloggers of note at the tail end of the 2000s — when the concept of gatekeeping was feasible — his rapid ascension created inspiration for avant-garde bedroom producers, with shock and awe tactics that capitalized on a then-burgeoning YouTube platform. Gradually developing into a more socially acceptable act throughout early adulthood, he’s gone from a niche success to having one of the stronger runs of the past decade in entertainment, let alone Los Angeles rap.

Since establishing Odd Future as an online force — culminating in a memorable performance on “Late Night With Jimmy Fallon” — Tyler’s personal highlight reel includes a clothing line and a store on the same famed fashion strip he frequented as a kid, TV shows, an ice cream company collaboration amongst a myriad of other endorsements, and most importantly Camp Flog Gnaw - his annual star studded music festival that’s featured performances from luminaries including his heroes Pharrell and Kanye West, Lil Wayne, and other heavy hitters.

As if his accolades weren’t already extensive, Tyler, The Creator’s 2019 LP Igor was a genre-bending release that took him from rap sensation to pop level positions reserved for the truly fortunate. Winning Best Rap Album at the following year’s Grammy ceremony and selling out New York’s famed Madison Square Garden officially rendered his mischievous humble beginnings a thing of the past. While day one fans with foresight were proud to see his potential maximized, they were left puzzled if not altogether annoyed at this trajectory forcing them to share their one time communal secret with the rest of the world.

Emerging from the pandemic following major releases from Justin Bieber, DJ Khaled, J. Cole and H.E.R over the past few months, Call Me If You Get Lost is Tyler’s latest inventive attempt at worldbuilding. His last role on Igor found him sporting an Andy Warhol style wig and pink suit while fusing European dance with Hip-Hop, while this go-round he puts on even more sophisticated airs. The cover’s minimalist artwork features a fictional passport photo for a protagonist with a snazzy fashion sense and the surname Baudelaire, the album delving into themes of escapism through travel and luxury possessions in place of looking inward to tackle emotional vulnerability.

A common thread stringing together most of Tyler, The Creator’s discography is voids left behind by his often intense connection to loved ones. His earliest narratives were driven by the neglect and sadness stemming from a reported single parent household, while future songs detailed the passing of his grandmother and his strained relationship with one-time comrade Earl Sweatshirt. Igor depicted Tyler’s infatuation for a guy emotionally involved with another woman, an extension of 2017’s Flower Boy which started a wave of forced speculation into his sexuality — this sure to continue here with intermittent lines that are sure to raise eyebrows surrounding his preference. No matter what umbrella he falls under (that is if he has a defined label at all) the bulk of Call Me If You Get Lost operates in a universe where the object of his affection is in fact a woman.

Proving himself to be nothing short of a conceptual mastermind, the aforementioned YouTube clip “SIDE STREET” and the video for “WUSYANAME” were brief snapshots of a tale in which he develops an emotional attachment to a friend’s significant other. “CORSO” hints at remorse over his role in said entanglement, as he says, “My heart broken, remembered I was rich so I bought me some new emotions, and a new boat cause I’d rather cry in the ocean.” Overly ambitious at points, “SWEET/I THOUGHT YOU WANTED TO DANCE” is a R&B/reggae fusion that extends Tyler’s streak of sequencing the 10th track on every project with multiple songs put together. Here newcomer Fana Hues sings from the conflicted perspective of the otherwise involved woman. All of the buildup leads to the album’s penultimate number “WILSHIRE,” the lengthiest solo track in Tyler’s catalog. Spilling his guts for 7 minutes about this emotional affair gone awry, we’re given greater context behind why he spends a sizeable portion of Call Me If You Get Lost bragging on his luxury — material possessions are a welcome distraction that don’t nearly equate to the love interest that truly captivates his spirit.

DJ Drama serves as host of the album, in the tradition of his revered Gangsta Grillz mixtape series from the 2000s and 2010s that saw him helping unlock different chambers of creativity for the likes of Lil Wayne, Young Jeezy and T.I. Drama’s mixtapes gave artists an outlet to eschew the restrictions of retail albums to stretch outside of their comfort zones, explore new ideas, and avoid structure — and the clearest comparison for Tyler is Drama’s In My Mind: The Prequel mixtape with Tyler’s musical forefather-turned-mentor Pharrell (who also appears on the trunk-rattling “JUGGERNAUT” with Lil Uzi Vert). Pharrell showed rap skills on that tape that many didn’t expect, and Tyler does the same. He delivers straightforward bar fests, his distinctive voice cutting through any beat he’s presented with, while also taking on playful, emotive exercises in melody. Where Drama’s husky, charismatic vocal drops once boosted rappers who sought to establish or further cement their street credibility, he comes in most handy when Tyler seeks to flex the opulent fruits of his labor. This surprise union is mutually beneficial, even if the DJ turned contemporary record executive borders self-parody with absurdist boasts like “While y’all was in the house (during the pandemic), we was taking Rolls Royces to see alligators” in service of the eccentric jokester.

Another possible explanation for DJ Drama’s presence would be his serving as an intermediary for artists who exist far outside of Tyler, The Creator’s wheelhouse. Where his former tradition of trap heavy lead singles (“Domo23” from Wolf and Flower Boy’s “Who Dat Boy”) could be taken as one-offs that served to reel onlookers in for more eclectic listening experiences, 2020 sensation 42 Dugg’s appearance on the radio ready “LEMONHEAD” shows an open-minded willingness to embrace what this generation has to offer. Though YoungBoy Never Broke Again seems out of place on the R&B friendly “WUSYANAME,” it takes a certain bravery for Tyler to place his integrity at risk of youth pandering accusations from jaded skeptics.

Though Tyler, The Creator claims Call Me If You Get Lost to be autobiographical truth, the most apparent facts are he’s both masterful at his craft along with the marketing entailed in releasing product every two years like clockwork. While he leaves us with no choice but to respect his boundless musical aspirations, he’s overly self-indulgent to a fault as his last few releases don’t stray far from repetitive lovelorn tales amidst arrogant celebration of an elevated tax bracket. One of a select few with the raw talent to reinvent his image and sound each album cycle, he seems stuck in a capitalistic rut where cool factor is determined by net worth — an idea that was never sold to draw his initial demographic in. Now 30 years of age and a perpetual wild card, he’s attained the ultimate freedom of being and doing whatever he wants: and while it’s easy to thrill listeners with punchlines, amusing videos and pretty chords, is the music just another promotional device for his multimedia empire and resultant megalomania?

More like this
Morgan Wallen's apology can't hide the racist subculture of country music
By Chloe Stillwell
Dua Lipa has officially distanced herself from DaBaby
By Kara Weisenstein
The U.S. just sold Wu-Tang Clan’s rarest album after targeting them for years
By Keith Nelson Jr.
Stay up to date