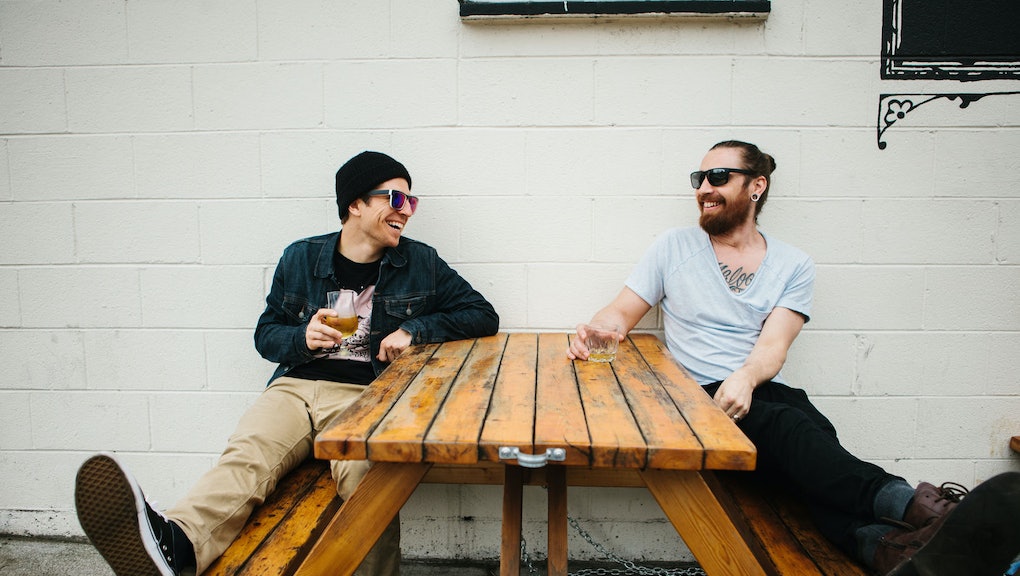 More friendships between gay and straight men could make everybody happier

Men die by suicide in this country at a rate three-and-a-half times higher than that of women. It’s evident that one of the reasons for such staggering statistics is a lack of substantive friendship among the male populace. Adult, white, heterosexual men have the fewest friends of any group in the United States, according to Salon, and the friendships they have with other men “provide less emotional support and involve lower levels of self-disclosure and trust than other types of friendships.” Such wariness of intimacy is the manifestation of depriving social lessons adopted by males as early as childhood, where friendships and emotions are not viewed as “masculine.” In order to foster better male friendships for both straight and gay men, we might want to consider engaging in something they’ve historically avoided: more inter-sexual-preference friendships, or what the New York Times called “bromosexual relationships.”

We’re just respective untapped resources, generally speaking. Engaging in friendships with people who have been socialized differently opens up the prospect for new perspectives, as well, only possible through vulnerability. But to forge better friendships and learn from each other, straight men like myself would of course have to work past any conscious or subconscious homophobia they may harbor, fertilized courtesy of cultural toxic masculinity.

“For most of the gay men that I know, the majority of their friends are constituted with women and gay men,” says Zach Rawlings, a clinical mental health counselor who works with many clients in the LGBTQ+ community, and focuses heavily on issues specific to men. “I don’t know a lot of gay men who seek out or have a strong desire to be friends with straight men, just because there’s a lot of wounded men and a lot of trauma that a lot of gay men have at the hands of straight men.”

A friend of mine, Mehran Khaghani, a comedian who describes himself onstage as a “weapons-grade homosexual,” confirms Rawling’s assertions. “Guys were mean to me and I was excluded for being different,” he says, adding that when particularly observing groups of straight men, he’ll more frequently notice their edging him out. “I don’t trust the boys club [and] at the end of the day straight men run the world.”

One way that straight men can become allies and open up avenues for more intimate friendships — with gay or straight males — is to embrace vulnerability and recognize it as a strength, not a weakness like it is under the guise of what we're socialized to consider masculine.

“When we’re vulnerable, it simply means that we’re capable of pursuing our goals, wants, and intentions, and we’re able to deal with the consequence on a feeling level,” Robert W. Firestone, a clinical psychologist and author, told Psychology Today. “And that includes a variety of feelings, some of which are frightening, some of which are very joyful and exciting … [Y]ou can afford to feel and, in a feeling state, you’re better able to cope effectively with your life.”

Such an outlook has picked up steam in the psychology world — particularly when it comes to the science behind sound relationships — as well as business and pop culture, with Brené Brown achieving fame thanks to a heavily-circulated TED Talk on the topic, which she recently parlayed it into a Netflix special. Among her most beloved, meme-worthy quotes are: “Staying vulnerable is a risk we have to take if we want to experience connection” and “Courage starts with showing up and letting ourselves be seen.”

I recently reconnected with Mehran, catching up over dinner and drinks a couple weeks ago. We discussed how my twice-a-week therapy was working its magic, how a childhood perceived lack of acceptance by my family led to my needing help, and how Mehran was repeatedly physically abused by his much-older brother, partly facilitating his own required therapy. We allowed ourselves to be vulnerable. It was a good time.

“More of men being open to intimacy in general, no matter who it is, would be more of a solution,” Rawlings says. “I don’t think gay men have some magic thoughts for straight men and vice versa, but there can certainly be some understanding and empathy, and just a breakdown of toxic masculinity, if people listen, express, and connect.”

In more one-on-one conversations with straight males, similar to the one he had with me a couple weeks ago, Mehran says he sees toxic masculinity-built boundaries broken down, too, allowing for greater openness between two budding friends.

Society has divided us based on sexual orientation, and given men more reasons to close themselves off to intimacy, whether we’re straight or gay. As we look to confront our mass depression problem, building bridges across these divides, in every which way, could be a powerful weapon in the battle.

This article was originally published on Sep. 17, 2019

More like this
Separation anxiety is real for couples who quarantined together
By Tracey Anne Duncan
What happens if platonic best friends decide to get married?
By Nausica Palazzo
Why I broke up with queer astrology
By Ty Baniewicz
Stay up to date