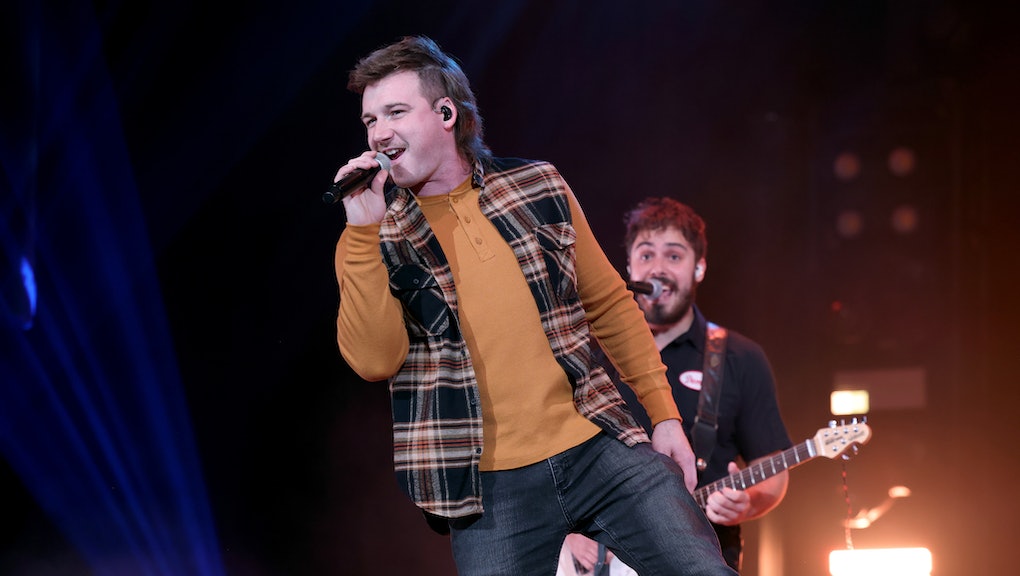 Back in February, Morgan Wallen seemed to have sufficiently ended his career after being caught by a neighbor using a racial slur in his driveway coming home from what he called "hour 72 of a 72-hour bender." Per TMZ, Wallen is heard saying to his friend's girlfriend, "take care of this “p****-ass mother******” — and then goes on to say, “take care of this p****-ass n*****." Wallen was immediately released from his label contract and country music institutions like the Academy of Country Music all scrambled to distance themselves from the singer as his music was pulled from all country music stations. Multiple country stars, like Marren Morris, spoke out against his use of the word as well. But as Morgan Wallen appeared on Good Morning America today to grovel for forgiveness months later, his inability to adequately digest his actions points to a more nefarious reality that is the "bro country" ethos and culture that consumes a good deal of the country music industry.

Wallen initially apologized back in February in an Instagram video. "I wrote so many detailed thoughts," he said in the video, "and only so many of those are being used because they painted me in an ever more careless light." How he could be making it worse in his own apology draft, and then admit to that being the case, is unfathomable. But only to some. What made the situation more nauseating is that Wallen's fan base took issue not with what Wallen said in his initial or subsequent videos, but with the fact that he was "cancelled." They took to streaming and album purchasing outlets and sales of Wallens' Dangerous: The Double Album skyrocketed by 1000%; it is still currently the most sold album of the year, and has been number one on the country music charts for over 24 weeks. It's all indicative of a much more sinister reality: racism is a rooted part of "bro country" for many of its fans.

The album sales led country star Jason Isbell to donate the earnings he made off of the album to the NAACP. And while some in country continue to try to right what is an industry of wrongs that has excluded black voices and stollen from black musicians since its inception, the country music industry at large continues to struggle to do the same. Many bemoaned Reba McEntire and Darius Rucker's takeover of the Country Music Awards from multi-year hosts Carrie Underwood and Brad Paisley as a cheap attempt at representation. Similar criticisms came with their duet at the ceremony of Elvis' "In The Ghetto" — which while honoring the passing of Mac Davis, who wrote the song, still seemed like a trite move by an institution known for its blatant and unapologetic whiteness.

The GMA interview this morning felt just like the leading apology that we've seen many times. It's a formula: fuck up, apologize, go to rehab (which Wallen did in San Diego after the incident), and then apologize again. What's worse is that nothing Wallen said was meaningful. He even ignorantly referenced his use of the word as "playful" with his group of friends. And while that's a shocking thing to say, anyone in the south can attest to the fact that certain communities refuse to grapple with the history of what they think is a colloquialism.

I'm personally from Nashville and was in a bar on the outskirts of town not long after Wallen's initial incident, when someone played "WAP" on the jukebox. The bartender yelled angrily from behind the bar, "Oh so you can put this on in a bar, but you can't say the n-word in your own damn driveway." You can leave these people to their own devices, or confront them like Wallen was confronted by Michael Strahan, but the connection between n-word usage, institutionalized racism, and violence against Black people seems to be incomprehensible for some fans of the bro country genre. It's the same culture that saw Wallen months before his use of the n-word getting arrested for public intoxication at Nashville's Kid Rock's Big Ass Honkey Tonk (a bar notorious for being a safe place for hard partiers with problematic values that refused to shut down during the pandemic), and then making light of his own mugshot.

"Ignorance" in this case seems to be like some kind of catchall defense — but the thing with ignorance is that once you admit to it, you have to fix it. Wallen says in the interview of the n-word, "I haven't seen that with my eyes. That pain or that insignificant feeling. Or whatever that is that it makes you feel." Which is an absurdly benign defense in 2021, to which one can only ask how have you not witnessed the harm done and being done to black people. Strahan quickly corrected him that it was a word that began as a way to dehumanize people during slavery adding, "It's also a word that a lot of black people heard before they were terrorized, beaten or possibly even killed."

Wallen continued to try and use outside actions to defend his lack of understanding, citing donations to and discussions with the Black Music Action Coalition, who had not by this morning responded for comment. Mickey Guyton, the first black female country singer to be nominated for a Grammy, called out the insincerity in a Twitter thread. "When I read comments saying 'this is not who we are' I laugh because this is exactly who country music is," she tweeted. "I question on a daily basis as to why I continue to fight to be in an industry that hates me so much." And that's the point. These are not isolated instances of drunken playfulness. It's a culture that must be grappled with inside an industry that, considering Wallen's album sales, stands to make too much money off of it not.