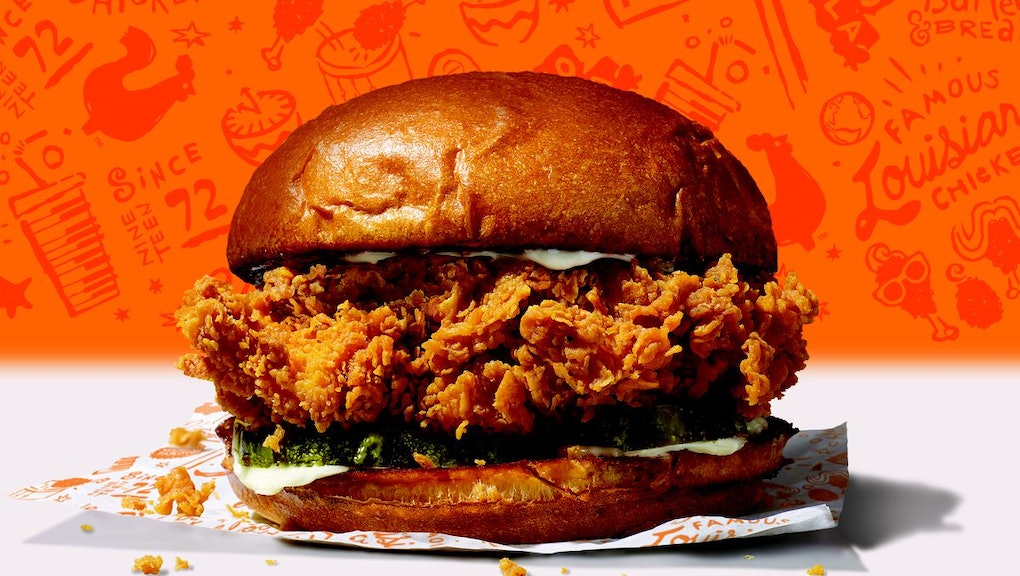 My yearlong quest to try the elusive Popeyes Chicken Sandwich

In many ways, the initial wave of Popeyes Chicken Sandwich mania offered a window into the future. Meat shortages, a voracious public descending on underpaid, overworked employees, an absurd resale market, and a single sheet of paper taped to the front door of fast food restaurants nationwide, gently encouraging customers to turn back around. Now that the Popeyes Chicken Sandwich has been out for one year, it’s significantly easier to eat one than it used to be, even with the clear pandemic-adjacent roadblocks. After a year of fruitless attempts, I finally tried one last weekend.

My journey to the Popeyes Chicken Sandwich is long and winding, with untold ounces of spilled gasoline and rental cars to get there. Right as the sandwich wars consumed the timeline last August, my main mode of transportation kicked the bucket. Right before my girlfriend and I were set to visit her family in Maryland, we took my 1995 Honda Accord to the shop to confirm that, yes, the gas tank was leaking all over the road and, yes, repairing it would cost far more than the tin can’s Kelley Blue Book valuation. Moments later, we went to Hertz down the road to get a rental car for the weekend. With no less than five Popeyes between us and her parents’ house, this should’ve been easy, right?

On the way there and back, we searched for Popeyes on Google Maps every 20 miles or so, to see which were close enough to exits to justify an attempt. The half dozen rest stops dotting the Pennsylvania turnpike were out, since sandwiches hadn’t been rolled out there just yet. But the standalone franchises all went the same way: we’d walk up to the front door, only to see a hand-written or typed-up message that the sandwiches were long sold out.

I don’t know why we thought this would go differently — if I recall correctly, there was still some mystery at this point as to which locations and cities had the sandwich to begin with — but we drove to the only Popeyes location within city limits upon returning home. About a year before the sandwich was introduced, the closest Popeyes in Pittsburgh was located on the college campus’ second busiest street. Somehow, it couldn’t outlast the revolving door of gentrification and fast casual chain restaurants in the neighborhood, which leaves local small businesses and seemingly every chain smaller than McDonald’s vulnerable for turnover. It closed just a few months too soon, and the storefront is still empty.

Anyway, we headed down to the South Side neighborhood to a filled parking lot and misguided promise. There were a few confused people lingering outside, who should have been reason enough to deter us. As we approached the restaurant, we began to make out a defeated worker sitting on the sidewalk outside, shaking her head through this bleak exchange with everyone who approached: “We're out of chicken." Oh, the sandwich. "No, all chicken.”

I’d passively try to find one in the year without a car. There was the sprint through a November downpour when I happened to be in the neighborhood, waiting for friends to Uber to the bar — no dice. Most recently, I rented another car back in June to head home for Father’s Day, after our county logged several weeks of minimal new COVID-19 cases. (It didn’t last.) The lone rest stop I tried was a ghost town, with the lights out at Popeyes and every register draped off.

Almost exactly one year after the initial trip to Maryland, we took the same drive this past weekend, en route to picking up a new used car of our own. On the way home, we stopped at what had to be one of the same franchises we tried last year, just outside of Frederick, Maryland. The endless line of cars snaking around the drive-through — at about 3:00 p.m. on a Sunday — would indicate that interest hasn’t waned much. The signs dotting the restaurant this time had nothing to do with chicken supply, just to prepare for takeout only, masks inside, no public restrooms, and no self-serve fountain drinks.

Devouring the sandwich back in the car — let’s be honest, this is no different than I’d behave under normal conditions — and it was immediately clear why people went crazy for this thing. My biggest fear about a Popeyes sandwich is that it’d take the more inconsistent parts of the Popeyes tender experience — often dry, flat breading, with a sometimes tough interior — and transport it over to a larger slab of meat. But this thing delivers! Tall, thick, moist piece of chicken, and it doesn’t get too runny or messy like some of its hot chicken competitors. Chick-fil-A’s standing as the superior sandwich and more ethically compromised choice are both safe.

Even after everything this year has thrown at us, the Popeyes Chicken Sandwich phenomenon will always seem bizarre in retrospect. Its marketing emerged as the final boss of sorts for voice-y brand social media accounts, mixed with the urgency of streetwear merch drops and Americans’ undying commitment to eat fast food. On Wednesday, Popeyes celebrated the sandwich’s one year anniversary with a Times Square ball drop to count down the days, hours, minutes, and seconds left in this trying year. While it’s incredibly naive to think anything will improve when the calendar flips to 2021, I’m still glad the new guy managed to survive its maniacal beginnings.

More like this
“Panny,” “panettone,” “panini”: Why silly pandemic nicknames are getting us through it
By Melissa Pandika
You can feel for Khloé Kardashian and also recognize she's part of the problem
By Kara Weisenstein
Miss Papua New Guinea's TikTok twerks aren't the problem — misogyny is
By Kara Weisenstein
Stay up to date