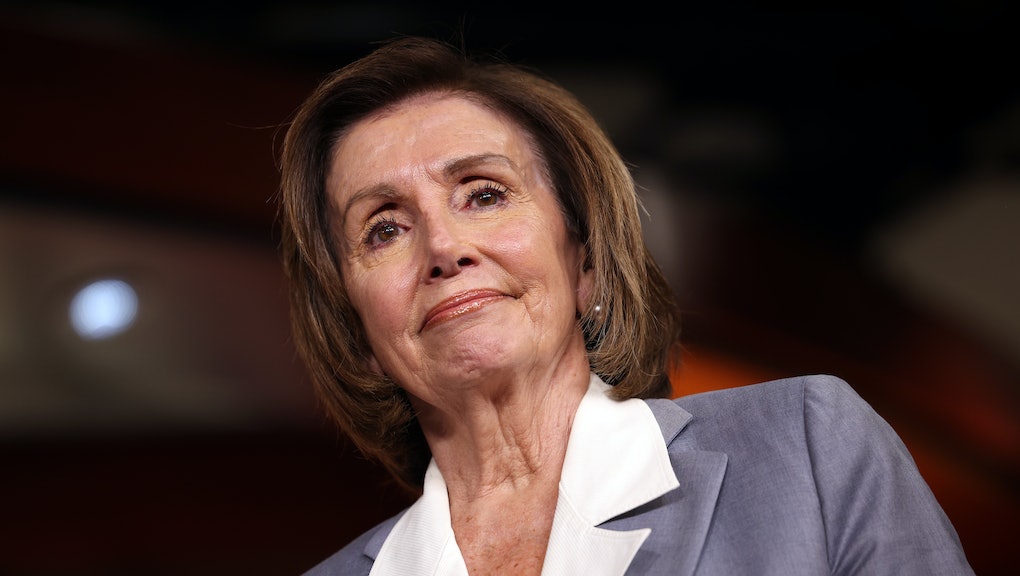 Nancy Pelosi took a stand on the Jan. 6 committee, and it left Republicans whiny as hell

It's not exactly hard to figure out why Republicans aren't particularly keen on a congressional investigation into the origins and events of the Jan. 6 insurrection attempt at the United States Capitol building. From backing the deranged conspiracy theories that helped foment the violent mob's assault on the halls of Congress, to potentially aiding the actual rioters, Republicans — particularly those in the House — seem to have a lot to be worried about in terms of what else the forthcoming select committee might uncover.

So, after Senate Republicans nixed an independent commission to investigate the coup that former President Donald Trump encouraged, Democrats in the House were left to go it alone, with House Speaker Nancy Pelosi magnanimously extending the branch of bipartisanship to the very same Republican Party whose members have already been publicly implicated in the insurrection. And wouldn't you just know it, the GOP's dedicatedly MAGA-fied leadership took a look at the outstretched hand of camaraderie and ... took a huge steamy dump right in Nancy's palm, with House Minority Leader Kevin McCarthy naming Reps. Jim Banks and Jim Jordan as two of the five Republicans he'd like to sit on the committee.

Which brings us to today, when Pelosi — recognizing that Jordan and Banks were among those House Republicans who helped contribute to the coup by not only voting to overturn Trump's unambiguous electoral defeat, but also by helping spearhead an (ultimately unsuccessful) effort to invalidate millions of ballots cast in the 2020 election — publicly blocked the pair from the committee. Pelosi explained in a statement that "with respect for the integrity of the investigation, with an insistence on the truth and with concern about statements made and actions taken by these members, I must reject the recommendations of Reps. Banks and Jordan to the select committee."

To a normal person, Pelosi's decision to block Banks and Jordan, but keep the remaining three nominated Republican lawmakers, seems like a perfectly reasonable decision. This is, at least in Jordan's case, someone whose own GOP colleagues (including, at the time, a member of the leadership team) directly blame him for the insurrection. But the post-2020 Republican Party is hardly comprised of "normal people" these days.

In response to Pelosi's decision, McCarthy decided to pack up his toys and go home, barring any Republicans from serving on the committee at all.

"This panel has lost all legitimacy and credibility and shows the speaker is more interested in playing politics than seeking the truth," McCarthy complained in a statement released just minutes after Pelosi's was made public. “Unless Speaker Pelosi reverses course and seats all five Republican nominees, Republicans will not be party to their sham process and will instead pursue our own investigation of the facts."

In a sense, this will ultimately give everyone what they want. Republicans can now bluster and whine about a partisan process that they are simply too principled and too patriotic for, while Democrats are now free to call Jordan and other alleged seditionists to testify without it being a conflict of interest. Unfortunately, giving everyone what they want might be convenient in the short term, but it's not exactly the sort of stalemate that's going to get to the bottom of what happened on Jan. 6. At the least, if Democrats do get around whatever GOP fuckery the Republicans will come up with next, they're not likely to be in a position to do much about it.

This, unfortunately, is exactly what the post-Trump GOP wants to be — an opposition party neutered and demonized to the point of irrelevance while they bravely and courageously continue to pump their base full of whichever culture war conspiracy theories are the most lucrative of the day. And until that grift is fully exhausted, it's unlikely we'll see anything change.