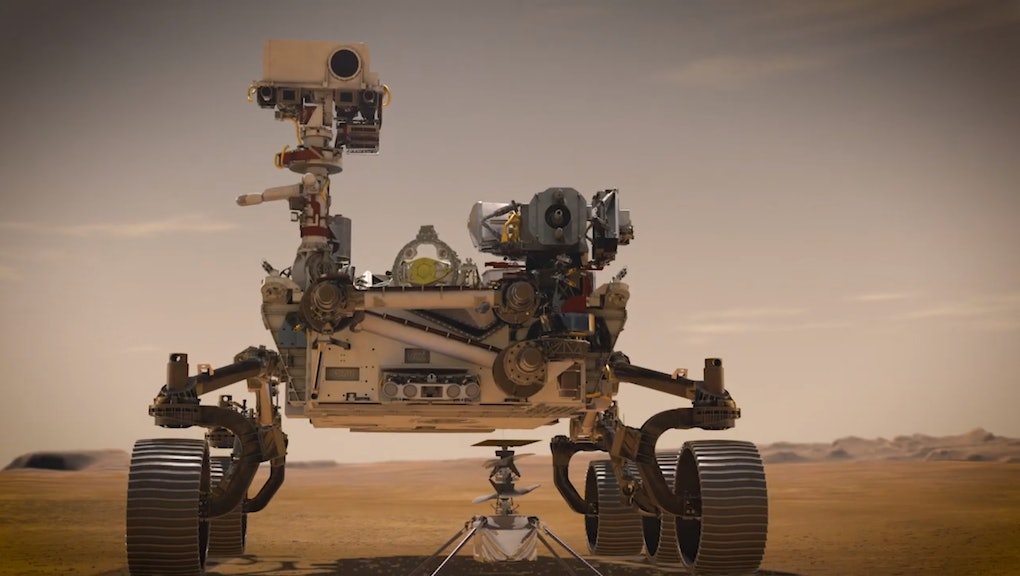 NASA has a new Mars rover set to launch into space at the end of this week for a seven-month journey to the Red Planet. Named Perseverance, the rover is the size of a small car, has a drill that can collect samples, will conduct unique tests for future human exploration, and will search for evidence of ancient microbial life. It's traveling with a friend named Ingenuity, a small helicopter that stands to be the first attempt at a controlled flight on another planet.

The pair will launch from Cape Canaveral in Florida on July 30 with live coverage starting at 7AM Eastern.

Perseverance's primary mission is to find evidence of organic molecules or ancient microbes on Mars. To do that, it will drill into the surface of the planet and collect rock samples which will be placed into protective tubes and left on the red planet. The tubes will stay on Mars until NASA can conduct two other missions to pick up the samples and send them to Earth for further study. The missions are predicted to last until 2031.

Perseverance will also have instruments to measure the atmosphere, weather, climate, and dust on the planet; an autonomous landing system to help the rover avoid dangers during landing; and an experiment that will try to create oxygen out of Mars's carbon dioxide-filled air.

All of these parts combined will, hopefully, provide further insight into how we can send humans to Mars.

"Perseverance sets a new bar for our ambitions at Mars," said Lori Glaze, planetary science director at NASA Headquarters, in a statement. "We will get closer than ever before to answering some of science's longest-standing questions about the Red Planet, including whether life ever arose there."

Perseverance's little partner, Ingenuity, is a different little bot with its own purpose: To become the first controlled flight on another planet.

It's a small task that could become a huge milestone for NASA's researchers and engineers. The atmosphere in Mars is incredibly thin, which makes it very difficult to fly in. The little helicopter has to be light enough and the propellers have to be fast enough to generate enough lift to get into the air.

Ingenuity will be autonomous, meaning its flight will be programmed beforehand, but it'll take off on its own once it lands with Perseverance. It will take at least five test flights of increasing difficulty over 30 Martian days to try out its limits and capabilities.

"The Ingenuity team has done everything to test the helicopter on Earth, and we are looking forward to flying our experiment in the real environment at Mars," said MiMi Aung, the Ingenuity project manager at JPL, in a NASA news release.

"We'll be learning all along the way, and it will be the ultimate reward for our team to be able to add another dimension to the way we explore other worlds in the future."

If all goes well, Perseverance and Ingenuity should make it to Mars on February 18, 2021. NASA has stated that they can afford delays up to August 15, but any longer than that will mean they have to halt the launch for 26 months. By then, Mars and Earth should be aligned enough for another attempt at travel.

Earlier this month, the United Arab Emirates and China also sent off orbiters and rovers to Mars for exploratory missions. These launches made history as the nations' first fully homegrown interplanetary missions.

More like this
Space debris from a rocket launch is currently hurtling toward Earth
By AJ Dellinger
UFOs are real but might not be aliens — and that's somehow more terrifying
By AJ Dellinger
Eating meat is killing people, but not in the way you think
By AJ Dellinger
Stay up to date