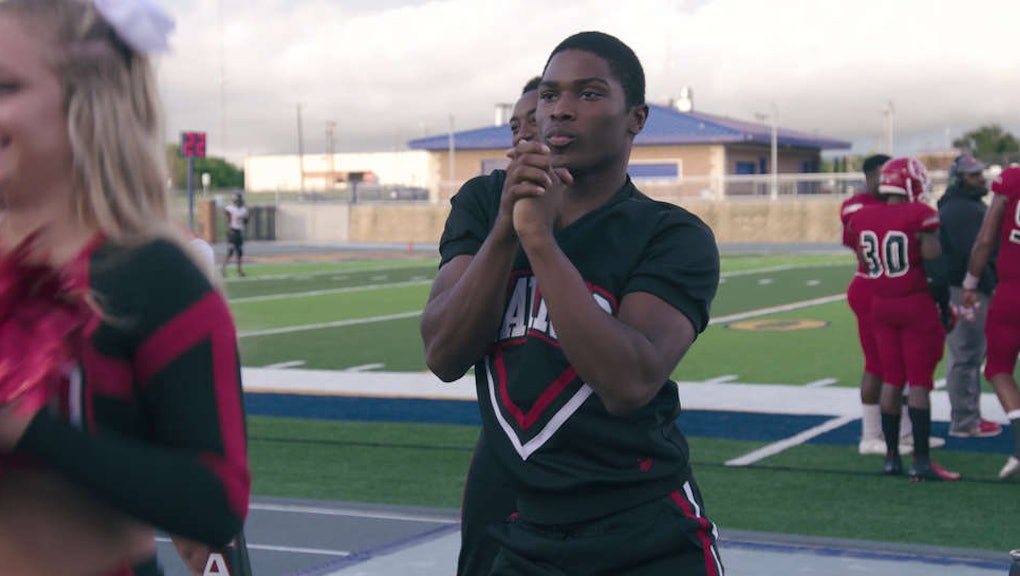 As a character trope, cheerleaders appear across pop culture. They epitomize all-American imagery, whether it be wholesome or hyper-sexualized. That imagery has grown more inclusive than one immediately might think. Over the decades, queer cheerleaders have made appearances in movies and television, (But I’m a Cheerleader, Riverdale, and Glee) as well as Black cheerleaders (Bring It On and Love Don’t Cost a Thing). But rarely in entertainment are they both LGBTQ+ and Black, making Netflix’s six-part docu-series Cheer a much-needed addition to the genre.

The show centers around a top cheer team at Navarro College, a community college located in Corsicana, Texas, and their journey toward the 2019 Daytona Beach NCA National Cheerleading Championship. Since 2000, the team has won 14 National Championships, making spots on the squad highly coveted and its members the sport’s best athletes in the country. The show reveals how the athletes span beyond the stereotypical image of a cheerleader, which has been portrayed as a Eurocentric, cisgender sample-size female athlete. By focusing on two Black LGBTQ+ male cheerleaders, La’Darius Marshall and Jeremiah “Jerry” Harris, the show demonstrates the variety of experiences within the sport, and how the all-American image of today is a multifaceted one.

Cheer illustrates how the sport serves as a safe space for Black LGBTQ+ athletes in a sports world that remains dominated by homophobia. It wasn’t until 2019 that male cheerleaders made their first appearance at the Super Bowl, with L.A. Rams dancers Napoleon Jinnies and Quinton Peron. And according to Ebony, Jinnies was a victim of bullying for being gay. During a revealing testimony on the show, Marshall shares how he was bullied by his brothers for his identity and his love of cheerleading. “My brothers were always calling me ‘fruity,’ or calling me ‘sugary.’ They would make me feel like I was not a part of the family,” he said. “To one point where they really said, ‘No Marshall is gay.’”

The show treats each character’s story as equally vibrant and important, though Harris’s journey to earn a place on the mat made him one of the most beloved figures on the series. Naturally, social media has rallied behind him. Despite not having much experience tumbling (i.e. backflips, jumps, etc.) his stamina and experience stunting, (i.e. supporting the “flyers” or the cheerleaders in the air), earned him a spot at the Daytona Beach competition. Harris, who by traditional standards is heavier than most cheerleaders, is a welcome change from typical cheer portrayals. By focusing on Harris in the show, we’re offered increased visibility of plus-size athletes, underscoring how cheerleaders of all sizes compete at the elite level.

Cheer does a lot to dispel any clichés one might believe about cheer. For one, the sport is incredibly high-risk. In the first episode, flyer Ashlee Sawai shared how she fell off of a pyramid stunt and knocked heads with another teammate. Shortly thereafter she felt nauseous, and the team’s trainer said she suffered symptoms of a concussion. Despite having the second-highest rate of concussions during practice following football, cheerleading is still viewed as an inferior, “feminine” sport, negating the athleticism of the Black male LGBTQ+ team members. Prior to cheering at Navarro, Marshall was gifted at football, doing back handsprings after a touchdown — resulting in his team losing points.

Participating in cheer is also not cheap. When I was a stunter in grade school, our uniforms alone were hundreds of dollars. And since there’s no sustainable career beyond college, it’s not always a lucrative investment in the long run, possibly dissuading families with limited income.

The class dynamics within the sport affect the real life teammates on Cheer. While struggling on a stunt with his partner, Marshall vents about the lack of resources he has in comparison to others. “I’m not like everybody else,” he says in an on-camera interview. “You [have been] cheering on all these amazing teams. You have the ability to pay for all the...private stuff. People don’t have that, and I’m one of those people.” The moment showed how there can often be a barrier to entry within the sport, especially if athletes want to progress.

Even if athletes were to parlay their skills into dancing for pro football teams, cheering full-time isn’t always financially feasible. Although, there may be hope in the Olympics. In 2016, the International Cheer Union, which is comprised of 116 member nations, was given “provisional recognition,” from the International Olympic Committee, according to The New York Times. It meant that by 2019, the ICU could apply to be part of the official Olympic games. Currently, it’s not listed in the Tokyo 2020 Olympics, but there are many who hope cheer will make the mat at the Paris 2024 games.

In the meantime, social media may be an answer. Cheerleaders are channeling their success and fame in the sport to other avenues and building their own personal brands, adding some longevity to their careers post-cheering. As of January 2020, Marshall has 190,000 Instagram followers, and Harris has 420,000, which could be very appealing to brands looking to reach a Millennial and Gen. Z audiences, in addition to giving visibility to Black queer men within the sport.

Although the value of an athlete shouldn’t be measured by how many likes or followers they have, it does reveal how there’s a global desire to see cheerleaders beyond the norm. Simply search #CheerNetflix on Twitter, and you’ll find users across the globe — Reese Witherspoon included — who are encouraging them from the virtual sidelines. There’s also thousands of posts on Instagram dedicated to #Blackboyscheer, showing how widespread support of the community is. Although it’s unknown if there’ll be a second season, Cheer has opened the world up to the joyful and multifaceted world of cheerleading. Clearly, the world wants to see even more Black boy joy.

More like this
The 8 best reality shows you're not watching, but should be
By Brandon Yu
Colin Kaepernick's new Netflix documentary highlights the man behind the icon
By Keith Nelson Jr.
After shutting up for a minute, celebrities want everyone to listen to them again
By Brandon Yu
Stay up to date