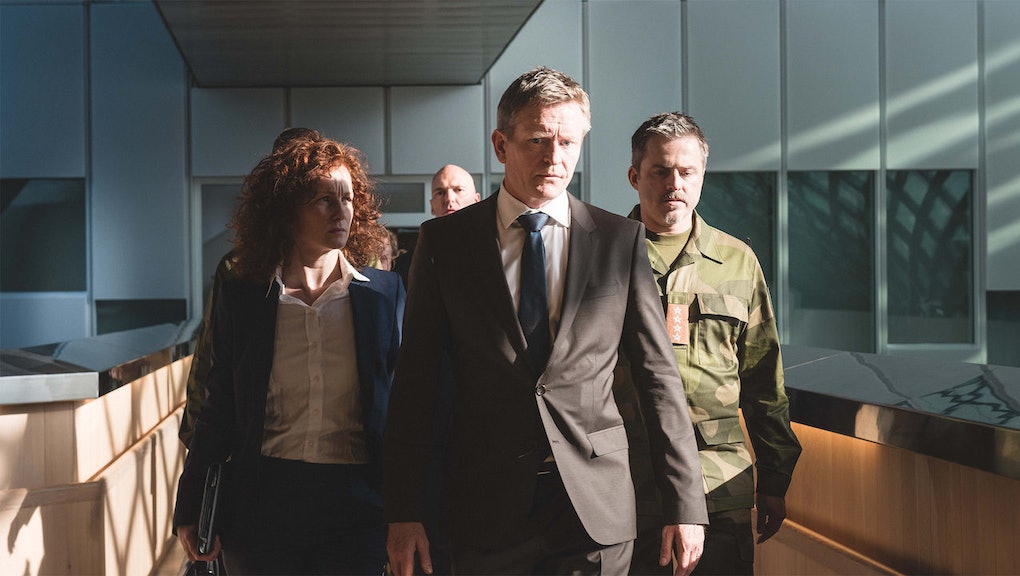 As climate change re-shapes our world and our borders, things will get bad. Consider the immense logistical and political challenge of completely transitioning to renewable energy sources. How would countries with economies driven by fossil fuels really react? That’s the hook of Occupied, the most expensive Norwegian TV series ever made, and the most under-discussed show on Netflix.

Cooked up from a storyline by crime author Jo Nesbø, Occupied kicks off in a near-future that feels uncomfortably real. The U.S. has achieved energy independence and left NATO. Civil wars in the Middle East have shut down the regional oil trade. And Norway, one of the world’s biggest oil exporters, has been ravaged by a hurricane that brings the climate crisis home for voters. The country’s Green Party sweeps the elections and the new prime minister, Jesper Berg (Henrik Mestad) decides it’s time to put the EU on a fossil fuel diet. Norway’s oil and gas production ends and g thorium nuclear energy is offered as an alternative. This causes a recession for EU countries, but it leads to something worse for Norway: an invasion by Russia, which is acting on behalf of the EU leadership, while also protecting its own fossil fuel interests.

And that’s just the first episode.

Occupied achieves a lot in its three short seasons. The first season shows the progression of the occupation of Norway — which begins without much violence — reaching a boiling point with Russian special forces and Norwegian paramilitary militias shooting each other in the streets of Oslo. Seasons two and three go deeper and show how the conflict pushes Norwegians to embrace nationalism, xenophobia, and eco-fascism, and how it backfires with horrible results. What begins as a clash between Norway and Russia escalates into a Scandinavian Standoff between multiple EU nations and factions of Norwegians that range from peacemakers to eco-terrorists. A secret service member (Eldar Skar), a judge (Selome Emnetu), a restaurant owner (Ane Dahl Torp), and a journalist (Vegar Hoel) are each swept up in the geopolitical crisis.

But despite being a well-timed cerebral political drama, it’s received minimal coverage from U.S. media. The third season release garnered one rave review from Vogue, but otherwise, no one with a platform seems to be watching Occupied. It’s just sitting right there in the Netflix lineup, waiting to be discovered by the same American audiences that can’t seem to get enough of moody European crime serials. It’s also the first narrative show in recent memory to depict how the climate crisis will change our world. This is a big deal because, as Geoff Dembicki noted in an article for VICE, climate change has been strangely absent from the TV landscape. We’ve been waiting for a show like Occupied. Or have we?

The golden age of streamable TV that we’re living in has been accompanied by the growth of binge-watching, which offers an even more intense kind of digital escapism than TV once did. The shows that many of us tune into for relief from can range from light to dark, but generally, they offer just enough topical distance from real life. Occupied is not like that. Each episode is like tuning into a waking nightmare in full color — a nightmare that we’re used to hearing climate activists like Greta Thunberg and Naomi Klein allude to, in ominous but uncertain terms. But what we’re seldom asked to do, when talking about climate change, is to imagine what the climate crisis might demand of us as individuals. It’s easy to talk about “taking action” in the era of climate change, but what does that look like? Does it involve voting for the right politicians? Taking up arms against other human beings? Protecting immigrants from bombings and acid attacks staged by fascists? Or giving up on the rule of law entirely and accepting its uselessness in the face of something like the climate apocalypse?

In Occupied, these things really happen. And the show never allows you to forget why they’re happening. Season three, in particular, brings everything back home to the climate crisis that started the entire chain reaction of violence and upheaval. If nothing else, Occupied is a reminder that every significant action that we may take to alleviate the climate crisis — such as shutting down oil and gas production—will cause disruption. The key question is, how do we all stop a singular act of disruption from metastasizing into World War III?

Historically, people have responded quite strongly to media that vividly depicts the collective nightmares we’d rather not fully engage with. Near the end of the Cold War, when millions dreamt of a nuclear holocaust, audiences got not one, but three films that fleshed out that nightmare. In America, Testament and The Day After showed viewers what nuclear bombs could do to a city like St. Louis, and what radiation sickness could do to your family. Across the pond, Mick Jackson’s Threads went even further and showed people how a nuclear strike could send a modernized U.K. back into the Medieval Ages of raping, pillaging, and starvation.

More than 100 million people watched The Day After when it aired on NBC — one of the largest television audiences in history. Since the bombings of Hiroshima and Nagasaki, a slow creep of nuclear anxiety had gripped the world. The U.S.-Soviet arms race exacerbated this collective fear. And in fact, by the time The Day After was broadcast, the world came terrifyingly close to nuclear war. De-classified documents from the CIA, NSA, and KGB reveal that in 1983, a NATO war simulation that was interpreted as a real by the Sovet Union almost led to missiles being fired. Four years later, the nuclear arms race de-escalation finally began, bringing an end to the Cold War. Nuclear terror had come to a head, after decades of dread, and films like The Day After surely played a role in sparking this Come To Jesus moment for the superpowers.

Today, a show like Occupied has the same utility as the films that brought nuclear war into millions of homes. One can argue that Occupied is more effective than those films because it’s not a slog of death and depression. It’s an insanely watchable show with likeable characters and twists that feel worthy of a 1960s political thriller like Z. But as the credits roll, a rank stench of death lingers. You’re suddenly aware of how fragile our world is right now. You’re left with a sharper image of how things could collapse if the world doesn’t figure out some way to address climate change humanely and cooperatively.

You might not want to talk about this. Most of us probably don’t. But we need to. Occupied is a sneak peak of the future that could unfold well within our lifetimes if we fail to talk about it. In that future, there’s no telling where you might end up, who you could become, or what you might do.