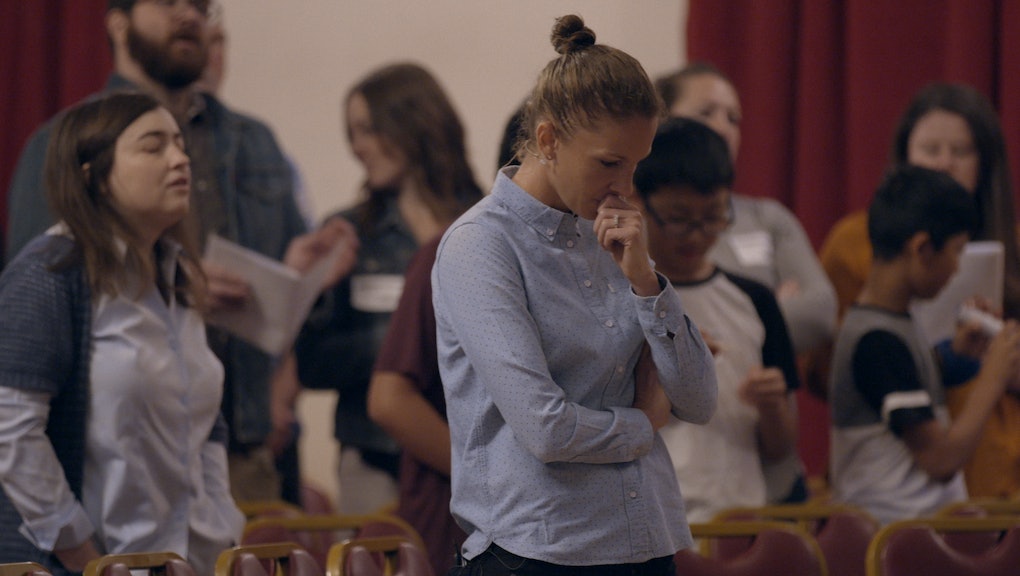 The fraught topic of conversion therapy has been nauseating queer people (and allies) for decades now. You know the drill: Some overzealous religious group gets together and tries to un-gay people because they believe homosexuality is an illness we can “heal” from, or some kind of spiritual choice. Many states are taking the initiative to establish bans on conversation therapy, but the practice is alive and well.

A new Netflix documentary Pray Away, explores one particularly disturbing instance of conversation therapy, following five former evangelicals who spearheaded Exodus International, an “ex-gay” organization founded in the 1970s. The organization, which was created by former Melodyland Christian Center member Michael Bussee, hired religious leaders and even therapists to help convince young queer Christians that they were leading sinful lives, and that they could leave it at any time to “follow Jesus again” — a.k.a. shove themselves back into the closet. Then, many of those converts went out and shamed other queers into giving up their “lifestyles.” It was like a Russian nesting doll of trauma.

There were times when I had to look away from the film. From the clips of pastors insisting that homosexuality was the manifestation of some deep personal failure to people having breakdowns in packed churches because they couldn’t pray away the gay, it was overhelmingly painful. Mostly because it reminded me of how much I had once hoped to change my sexuality.

Still, as I waded through stories of how queer people got out safely (or didn’t, as one Exodus member preaches publicly about being “cured” from the sin of his former promiscuous trans life), there was a gnawing feeling I couldn’t ignore. There seemed to be a lot of forgiveness happening in this film — and not always the good kind.

As a queer person, I felt as if parts of the documentary were asking me to empathize with the leaders of Exodus just because many of them were queer. But in many ways, the idea of someone from my community perpetuating homophobia feels worse than a non-queer person doing it, because they know first-hand the type of hurt that they are inflicting.

This is a really complex concept to excavate because it’s unfair to place blame on a person who has been psychologically manipulated and tortured (like the queer victims of Exodus who then became evangelists). But queer people are capable of oppressing others with their own homophobia — and racism, and ableism, for the record. And doing so is a choice. Ultimately, everyone at Exodus, regardless of their sexual orientation, did some damage — and I’m not ready to forgive.

A big part of the film revolved around how the “ex-gay” evangelists in the film were now living relatively comfortable, openly queer lives — it came across as inspiring upon first glance. But to me, it felt like a lack of accountability for partaking in a practice that was so harmful (and in some cases, deadly) to LGBTQ people. The extent of their remorse lies in a couple of teary-eyed scenes and fleeting admissions of guilt. And while I cannot judge someone else’s trauma, this feels hurtful to me as a viewer.

Exodus leaders were given a “second chance” at living lives that were authentic to them, even if they tried to stop so many others from doing the same. On the one hand, I fully recognize that many of the people at Exodus International were being used as pawns. On the other hand, I felt that the film was urging me to see their humanity without centering a very important part of their journey: Owning up to how they hurt others.

All too often, queer people are expected to “forgive” our aggressors no matter what they’ve done. In the film, former Exodus leaders admitted to flat-out lying to queer people about their experiences, as well as using shame tactics and manipulation to get queer people to hate themselves. Am I a resentful, bitter person if I find it hard to forgive those actions?

Ultimately, everyone at Exodus, regardless of their sexual orientation, did some damage — and I’m not ready to forgive.

Apparently, the director of Pray Away, Kristine Stolakis — who is not queer, but whose trans uncle went through conversion therapy — grappled with similar questions while working on the documentary. "I really expected to be furious at people who had led this movement," she told NPR. "But the overwhelming feeling that I had was sadness, actually. I think it was because of most of the people's good intentions.”

I absolutely get that. These organization members genuinely believed they were helping others by “turning” them away from their LGBTQ identities. But as a queer person who grew up in a society and an era where social attitudes have changed extremely quickly, I can’t help but feel uncomfortable by the expectation that we should always forgive former homophobes (even if they are themselves queer) because they “didn’t know any better.” Feigning ignorance is not enough.

There’s a lot behind my reluctance to forgive. To this day, I still resent a middle school bully with every fiber of my being who once called me the f-word. “Things were different back then,” a friend recently told me. “Everyone was saying ignorant sh*t.” And so, I was expected to let it go.

Every once in a while, my dad will ask me why I still feel so much rage towards the Catholic Church, which is where I learned to feel intrinsically unloved. It was the place I learned to equate my queer feelings with the inevitability of eternal hellfire. By now, the Pope seems to be fine with gays in a lukewarm-ish way and there are gay churches all over the place, it seems.

But none of this makes a difference in the powerlessness I felt when the attitudes of our culture were not on my side. Society changed, much of the people around me realized that being homophobic was bad and the world kept spinning. But my past stayed the same.

I know holding on to rage might “poison me” more than it does anyone else. But queer forgiveness should be earned and never assumed. I also hope we can demand authentic remorse from people who have reinforced the idea that queerness is a disease. At the very least, it would validate our pain. Or even discourage other organizations from springing up in Exodus’s place, as the documentary points out continues to happen.

My inability to let it go made ‘Pray Away’ a complicated film. While it provided a crucial perspective into a world otherwise inaccessible to me, it stoked an already smoldering fire in me. Perhaps that is the work that is yet to be done.