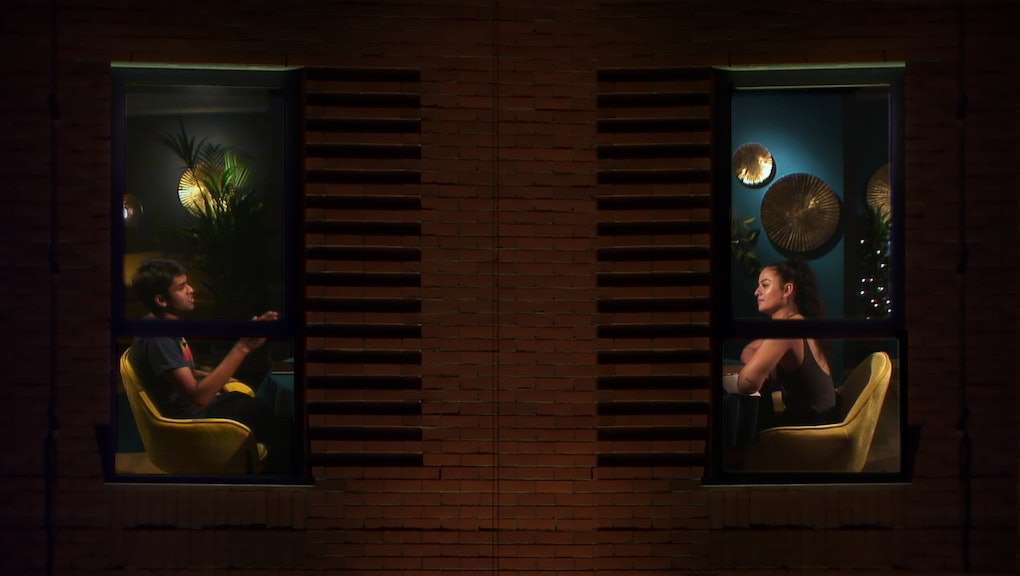 “Message: #iamtherealdeal.” Mercedeze, a 27-year-old player on Netflix’s reality series The Circle, says this to her television set in the sixth episode. Or rather, she instructs The Circle, a voice-activated social platform that functions as the communicative nexus of the show, to send this message to 26-year-old Rebecca, another player. In reality, Mercedeze is Karyn, 37, and Rebecca is Seaburn, 29 — two “catfish” in the sea, deceiving each other — politely.

This is The Circle, a unique series that explicitly attempts to say something about social media by forcing its players to only interact using its platform and only according to its limitations. For example, players can only personalize their accounts in certain ways (age, relationship, status updates) and only at certain times. The show, based on a British series, was created by Tom Harcourt, who combined a social media-based game with his longtime idea for a Rear Window-esque reality series. Mirroring the social dynamics that develop online is built into the show’s DNA, particularly as players are asked to rank everyone (recalling a notable Black Mirror episode), leaving the top 2 players as influencers that must choose which player to “block,” meaning remove from the game. In the end, the most popular player left standing wins $100,000. It is, quite plainly, a popularity contest.

This re-creation of social life online extends to the ability of players to pretend to be someone else, as Karyn and Seaburn decide to do. It can be illuminating to watch how these players practice these deceits, and how they articulate their reasoning. Karyn, for example, is adamant that her choice to play as a more conventionally-attractive woman 10 years her junior is intended to show that you can never judge a book by its cover. She argues that she speaks in the game as herself, hoping that other players will identify with her real personality while being fooled by her fake profile. After she is blocked from the game, she is allowed to visit and reveal her real self to one player, and she goes to see Chris, a 30-year-old man from Dallas who plays as himself. Before she arrives, Chris tells the camera, seemingly confirming Karyn’s hopes, “I don’t know if this bitch is real or not, but whoever the fuck is behind Mercedeze, I wanna be friends with regardless.”

This is what makes The Circle so singularly enticing. On one level, we can all understand the basic idea that you can’t trust anyone or anything online. The Circle takes for granted the fact that reality TV can never truly capture reality, no matter how state-of-the-art your surveillance apparatus may be. Instead, the focus is on how each player takes a different approach to managing their authenticity. If anything, the show offers lessons in navigating life on social media, training players and viewers alike to rethink their social relationships.

It can be illuminating to watch how these players practice these deceits, and how they articulate their reasoning.

Take Alana, a 25-year-old model who plays as herself. Many players immediately assume she is a catfish, not only because she is a picture-perfect model, but because her affect comes off as insincerely positive and empowering (she starts a girls-only group chat called “Skinny Girls” and says that “girls who stick together are pretty girls”). As a result, Alana is blocked at the end of the first episode, and everyone is shocked to learn that she had been playing as herself. What is the moral here about authenticity? Alana had been herself, as far as we can tell, using her own photos and her own personality, which was seen as fake. At the same time, Alana’s persona is certainly calibrated according to her own strategy, along with the awareness of being on a TV show and aiming to be popular enough to win the $100,000. What at first may appear simple — pretty white girl gets sent home for being “herself”— turns out to hold a number of more complex contexts that could challenge assumptions about her role in the show and the show’s entire premise.

The vast majority of The Circle’s action features players speaking to their televisions, bookending each statement with “Message:” and “Send.” Not exactly a winning formula for riveting entertainment. It’s a constant indication that this social bubble is a self-contained world that is intended to provoke questions about “how we live now.” As host Michelle Buteau asks, “How far would you go to be popular on social media if there were $100,000 at stake?” Truly, these players fall into the predictable traps — groupthink takes over whenever someone is identified as a possible catfish; many take great care to choose the perfect profile photo that represents the message they want to send; they inevitably judge people by their appearances, or by their inferred tone, or by any number of infinitesimal details whether or not they’re perceptible by the audience.

It’s a shamelessly cruel set-up that is deliberately dystopian in its design, forcing viewers to think about what it would be like to actively rank everyone in your life and then realizing that you probably already do a similar kind of social arithmetic without realizing it. Taking this as its starting point allows for surprising moments and story arcs to develop. Initially I deeply disliked Joey, a 25-year-old walking stereotype of the family-oriented gym rat bro reminiscent of the type that populated Jersey Shore. It sounds corny and predictable, but I soon grew to love him, in part because he revealed layers I hadn’t foreseen but even more significantly because he seemed so genuine about each aspect of his personality, about simply being himself.

Or at least this version of himself. That’s the real takeaway from The Circle. When two new players join in the seventh episode, Joey exclaims jokingly, “Let’s start judging people without knowing them, because that’s what I’ve learned we do!” The Circle suggests that we can find ourselves being honest and authentic online even within the facades we construct, and that these judgments are social calibrations that platforms like The Circle may force on us but that we find to be inherent within us, too. Players routinely note how difficult it is to maintain their persona, and the catfishing players in particular stress how often their “real” selves bleed into the fiction they’ve created. But they are never entirely fictional, just as each version of ourselves we embody online are complex assemblages of artificiality and #therealdeal. We all do what we think it takes to get attention, seem normal, or express ourselves. The set-up of The Circle ingeniously obliges players to externalize and give voice to the tiny judgments and decisions we make as social beings online every day, exposing both their triviality and their intricacy. It may be absurd, but it’s human.

More like this
Congrats to GOP Rep. Mo Brooks for tweeting his own passwords out to 100k followers
By Rafi Schwartz
Donald Trump's blogging days are over
By AJ Dellinger
How Subtle Asian Traits made a generation of Asians feel understood on the internet
By Claire Wang
Stay up to date