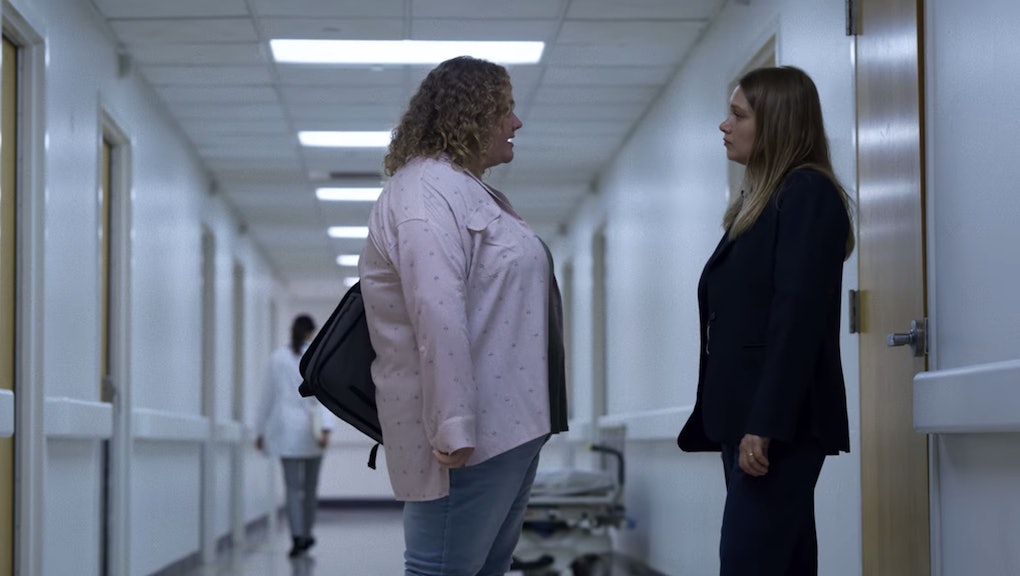 True crime is a fraught genre. It can easily devolve into exploitation — transforming trauma into spectacle. But in some cases, it balances sensitivity with authenticity. Netflix's miniseries Unbelievable is one of the rare true crime shows that works directly against dehumanization. It doesn't monetize the story at its core for entertainment. Instead, the show is an exercise in truth-telling.

The 8-part mini series fictionalizes the stories of two sexual assault investigations — one manipulative, involving gaslighting and intimidation by detectives, and the other well-executed and effective, resulting in the arrest of a serial rapist. With attentive editing and brilliant performances from Toni Collette, Merritt Wever, and Kaitlyn Dever, the series brings cultural myths about sexual assault into sharp focus. It exposes how our criminal justice system often fails survivors, and it offers a vision for what justice might look like.

Unbelievable begins by telling. It's 2008, and 18-year-old Marie (Kaitlyn Dever) sits on the floor of her apartment in Lynwood, Washington, a blanket wrapped around her shoulders. A police officer arrives, introduces himself, and immediately launches into the reporting process. "Tell me everything — everything you remember," he says.

What follows is a portrait of re-traumatization. Marie describes the previous night and answers the officer's questions, amid waves of flashbacks. Minutes later, a detective named Parker asks Marie to retell the events, again, to revisit the assault, again. When Parker finishes jotting down notes, he sends Marie to a medical exam, where she's asked to describe the assault another time. After the long and clinical procedure, a nurse hands Marie a baggie of pills (the morning-after pill and an antibiotic for potential exposure to STIs) and a number to call in case of any side effects — among them 'excessive bleeding' and 'thoughts of suicide.' Marie has to explain everything again at the station, then for a fifth time in writing.

These scenes illustrate what can make reporting an assault not only a disorienting and exhausting ordeal, but a traumatic one too. The first episode's opening sequence builds an atmosphere of frigid fatigue. Each scene's palette is cool-toned with muted grays and blues — practically colorless. A fish-eye lens emphasizes the detectives' intimidation tactics, warping the frame as the detectives distort Marie's story. A few frames show us Marie's vantage point as she stares down at the baggie of pills, or looks into a nurse's avoidant eyes during a cheek swab. The cops, detectives, and nurses all appear in close-ups, but they're emotionally remote (or totally absent). And their physical proximity to Marie's trauma clashes with that distance.

Over the next few days, everything spirals. Detective Parker and another middle-aged cop drill Marie on the details. They repeatedly question her memory, and in turn they gradually make Marie question her own reality. Their questions become an interrogation over "inconsistencies," and eventually turns to manipulation. After Marie's former foster mom tells an officer that, in her view, Marie's reaction didn't make sense because it didn't match her own experiences with assault, the detectives start to suggest Marie fabricated the story. They wield their frustration against Marie as an intimidation tactic, their tone climbing into exasperated hostility.

Finally, one cop implies that Marie invented the assault to "get her the attention she needs." Visibly fatigued, traumatized, and crying, Marie reports that it could've been a dream. "I'm pretty positive that it happened," she says. "Pretty positive, or positive?" the detective replies, arms folded across his chest. She eventually recants her original statement and, in an arguably retaliatory move, the Lynnwood police department charges Marie for false reporting — a crime that's almost never prosecuted. Her lawyer arranges a plea deal in exchange for a $500 fine.

Running parallel to this narrative thread is its foil: a similar case, handled completely differently. Three years after Marie's plea deal, a college student named Amber reports a sexual assault in Colorado. When Detective Karen Duvall (Merritt Wever) arrives to investigate, she prioritizes privacy, openness, and consent. Think back to Detective Parker: He asks Marie to clarify sensitive details on the spot, with an air of nonchalance as if he's completing paperwork. Duvall, instead, offers Amber the privacy of her car and speaks in a tone that's attentive without being patronizing, one that acknowledges the fact that Amber's just survived something traumatic. She never pushes Amber to provide more information, makes her repeat herself, or asks for clarification. And Duvall makes sure Amber is aware of the resources available to her on site — the medics, in case she's injured. Duvall later accompanies Amber to the medical examiner and tells her that a counselor will be present throughout the exam. Of course, it's impossible to ignore gender here: both detectives who end up investigating Marie's case are men and both detectives who investigate Amber's are women. But it would be reductive to say that Unbelievable boils down good investigative choices to the gender of the detective making them. Their aim is to expose how gender interacts with those decisions.

Another striking but subtle difference: the language that Detective Duvall uses, compared to Detective Parker's. When Amber asks Duvall if it's weird she's only told the police, Duvall replies, "Who you choose to tell and when you choose to tell them, that's entirely your decision." Parker, meanwhile, delivers most of his questions like directives. And in requiring Marie to repeat and confirm the details of the assault, he fails to provide for her agency over the telling.

Unbelievable's showrunner Susannah Grant highlights Duvall's attentiveness throughout these scenes. In almost every frame, both Amber and Duvall are visible. They appear together and beside each other in a private space. Notice that the palette is warm and the lighting is bright.

Contrast that with Marie's scenes. When she's first asked to describe the assault to a cop, she always appears alone in the frame. Everything is grey. And as the detectives become increasingly frustrated and manipulative with her, the camera angles become increasingly exaggerated, severe, and unnerving. The colors drain. During the most intense gaslighting scene, for example, the camera looks up at Marie from below the interrogation table. Of course, using the camera in this way cues us into the emotional landscapes that the characters inhabit and, specifically, it gives us a sense of what our protagonists are feeling.

Duvall's emotional presence is especially noticeable (and necessary) during one moment, in the car scene. After Duvall tells Amber what to expect from the medical exam, she asks, "Would you be comfortable with me trying to collect DNA evidence from your face now?" It's clear that the moment is shot with an immense attention to detail. As the camera cuts between Amber and Duvall's faces, each frame is steady and patient, giving us time to notice micro-expressions. A case in point: before touching Amber, Duvall makes eye contact and gives a small nod, letting Amber know she's about to begin. It's this kind of communication — small gestures and thoughtful word choice — that helps build a sense safety and boundaries. And, here, Unbelievable reminds us why creating that kind of environment is so critical. As Duvall carefully draws a q-tip across Amber's forehead and cheek, we notice the change in her breathing, the fact that it's an anxiety-inducing experience. We hear only the q-tip gauze brushing the skin. So, as viewers, we're encouraged to focus in. We're encouraged to pay attention to the texture of the q-tip, the intricacies of the space, every sensory detail. We're asked to be present too.

It's in these moments that Parker's incompetence — his callousness, boundary-breaking, and manipulation — becomes even more obvious. What we're left with isn't just a comment on investigative tactics. It's a piece of true crime that feels deeply relevant to our cultural and political moment.

If you or someone you know has been sexually assaulted, call the National Sexual Assault Telephone Hotline at 800-656-HOPE (4673) or visit online.rainn.org.

More like this
'Dr. Death' clings to the wrong part of a true story
By Chloe Stillwell
8 shows like 'Ted Lasso' to watch if you need more feel-good TV
By Brandon Yu
This couple's gender reveal stunt started a deadly wildfire. They're now facing 20 years in jail
By Joseph Lamour
Stay up to date