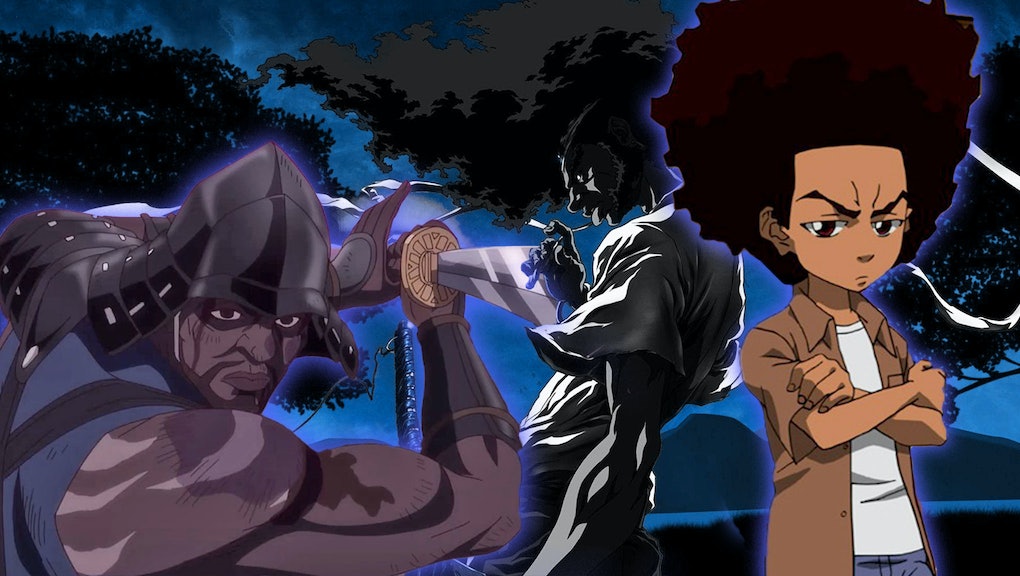 Netflix’s newest animated series, Yasuke, showcases a trio of superstar Black talent: LaKeith Stanfield voices of the Black servant-turned-samurai protagonist, LeSean Thomas directs the series after leadership roles in shows like The Boondocks and Black Dynamite, and Grammy Award-winning producer Flying Lotus provides a slate of original music. But as major as this is, it isn’t Black people’s first entrance into anime, a style of Japanese film and television animation. In fact, the two have a long history together. Black viewers have been attracted to anime’s addictive storylines, stunning fighting choreography, and vibrant animation styles for years. And as the genre continues to blossom on a mainstream level, Black fans and creators are leaving their stamp all over it.

Anime’s popularity in the United States dates back to the 1960s debut of Astro Boy, an adventure series about an android child with human emotions created by a scientist after the death of his son. Astro Boy was a hit, and it didn’t take long for more Japanese shows, like Gigantor, to be edited and repurposed for American audiences. In the '80s, films like Hayao Miyazaki’s Nausicaä of the Valley of the Wind and Katsuhiro Otomo’s Akira, as well as the show Robotech, became landmark moments in their own right, with their mature subject matter proving adults could enjoy the genre just as much as kids. The '90s saw the rise of Sailor Moon, Dragon Ball Z (DBZ), Gundam Wing, Pokemon, and Neon Genesis Evangelion — shows that garnered die-hard American audiences with their memorable characters, distinctive storylines, and stylistic animations.

Like many other Black kids, my introduction to anime was through Toonami, a block of Cartoon Network programming — including Dragon Ball Z and Naruto —that began in 1997 and aired on weekday afternoons before transitioning to the channel’s late-night Saturday Adult Swim block. As kids, our attraction to the shows that aired on Toonami was simple: We saw cool animations not normally found in cartoons, a flair for fighting styles, and power-ups with interesting worlds and characters populating them.

It was a communal experience to talk about Toonami shows at school on Monday after watching on Saturday and waiting all day Sunday. Victoria Johnson, a freelance writer and host of the Sailor Moon Fan Club podcast says the Toonami block — specifically shows like Sailor Moon and Dragon Ball Z — were essential in her growth and appreciation for art. “I didn't realize it at the time, but anime was the first time I saw a continuous storyline in animated form,” she tells Mic. “So instead of American cartoons that were one-off episodes, with Sailor Moon, I was tuning in to a story that was progressing every day. Sailor Moon and DBZ were also some of my first introductions to lore. We're talking about reincarnated princesses from the moon? How could that not be fascinating? There were also so many strong women characters, like the Sailor Senshi, but also Bulma and Android 18, that was cool to see.”

Rapper Open Mike Eagle also says that anime was specifically resonant for him as a hip-hop artist, though his reasoning is something that many more can relate to. “I know rap in particular has a lot of room in it for the performer to envision and perform a heightened version of themselves,” he told Mic, alluding to the constantly growing power of characters like Dragon Ball Z’s Goku. “I think that the larger than life personalities and situations of anime resonate easily in that space. They stimulate the imagination and give us something to aim for when we think big.”

We also infused our own cultural foundations into our enjoyment of these shows. Across anime, Black fans latch onto characters that, while not Black specifically, may appear “Black-coded” in our consciousness. Take Dragon Ball Z and Dragon Ball GT characters Piccolo and Uub, for example, the former of which has a well-known inside joke of coming off as Black to fans. Piccolo’s demeanor as an ally of the Z-Fighters, Earth’s premiere fighting team against evil, resembled the quiet-but-strong types people can relate to Black men. And the DBZ filler episode, “Goku’s Ordeal,” featured Piccolo in casual wear that prompted some to see this prideful Namekian as a Black character.

With memories of Toonami firmly planted in millions of fans' minds, it was only a matter of time before Black people reflected that love back into their work. The Boondocks, which first aired in 2005, was one of the earliest adopters. Thomas combined the standout Black characters and sensibilities of creator Aaron McGruder’s cult favorite comic strip with an animation style that mirrored anime shows like Naruto and Cowboy Bebop. In some aspects, The Boondocks is a love letter to the genre of anime itself: During a 2012 interview with Comics Alliance in 2012, McGruder described the show as “our attempt at anime, but it’s very, very Black.”

Since then, there has been a swell of Black creators across various mediums who use anime as a foundation, applying specific Black-isms and cultural aspects to videos that connect both worlds. RDCWorld1, a comedy YouTube channel, has created incredible videos, like “When People Take Anime Too Far” and “Anime House,” which appeal to both novices and die-hard fans by hilariously infusing Black culture into references to classic anime characters, storylines, and combat. YouTuber King Vader highlights the relationship between Black Music and anime with videos like “Hood Naruto” that showcase a marriage of hip-hop and anime into live action. Lupe Fiasco regularly shouts out anime characters in his rhymes (including the thief Lupin III in Kanye West’s 2005 hit “Touch The Sky”), and in a cover shoot for PAPER magazine, avowed anime fan Megan Thee Stallion cosplayed as Shoto Todoroki, a character from the series My Hero Academia. Meg even partnered with anime hub Crunchyroll to release merch. And the influence isn’t one-sided: Takashi Okazaki created the manga series Afro Samurai from his love and admiration for soul and hip-hop; the graphic novel was later turned into a television series and a movie sequel called Afro Samurai: Resurrection, with the Wu-Tang Clan’s RZA producing the soundtracks for both.

And the combination of Black creatives and Anime isn’t limited to one-off projects. In 2016, twin brothers Arthell and Darnell Isom, along with animator Henry Thurlow, founded D’ART Shtajio, the first American anime studio in Japan and the first major Black-owned anime studio ever. The studio has been working with artists like The Weeknd to direct a music video, along with fan favorite anime titles such as Attack on Titan, Fire Force Season 2, Overlord 2 and 3, and Tokyo Ghoul.

This week’s release of Yasuke is yet another milestone for Black people in anime, with three superstars in their respective industries uniting for a major high-profile project. But if the past is any indication, there's plenty more to come.