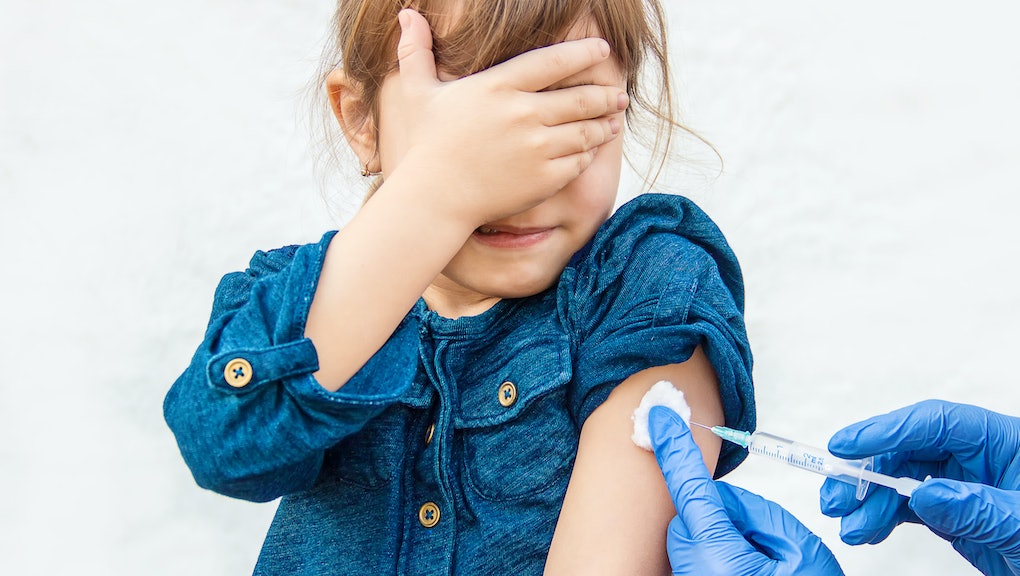 If you are a New Jersey parent hoping to send your kids to school without worrying about archaic diseases, you shouldn’t rest easy just yet. The New Jersey legislature has postponed a vote on a new vaccination law that would have ended religious exemptions to vaccines for students in the state, amid loud protests from anti-vaccination activists who swarmed to the state capitol Monday. The bill would have made New Jersey one of the strongest pro-vaccine states in the country by eliminating the exemptions that have been used by religious groups and others to avoid vaccinating their kids. The rule would have covered both public and private schools.

That didn’t set well with the hundreds of parents who appeared outside of the statehouse and chanted, “Do not touch my child!” according to The New York Times.

The New Jersey State Assembly passed the bill by a comfortable margin, 45 to 25, and the law was expected to pass the Senate. Ultimately, though, legislators came to the conclusion that the bill didn’t have quite enough votes to advance, and they postponed the vote. The bill can be brought back for a new vote before the legislative session ends Jan. 13.

The news of the postponement sparked cheers from the protesters outside, though pro-vaccine legislators warned they’re not abandoning the measure without a fight. “They can cheer all they want. We’re not walking away from it,” said New Jersey Senate President Stephen M. Sweeney in an interview with the Times, “It’s just remarkable how people are looking at this and not trusting the science on it at all. They’re trusting the internet.”

The bill was drawn up in response to an outbreak of measles in the state last year. Religious exemptions have been increasing in New Jersey over the past decade, spurred by religious groups like ultra-Orthodox Hasidic Jews and staunch Christians.

“I’m disappointed, but it’s another roadblock,” New Jersey Senate Majority Leader Loretta Weinberg, a sponsor of the bill, said to reporters. “They have no science upon which to base their ideas, and there is no religion that bans giving vaccinations.”

“It’s just remarkable how people are looking at this and not trusting the science on it at all. They’re trusting the internet.”

In a statement, Weinberg and her co-sponsor Joseph Vitale said that their pro-vaccine bill is “an important public safety measure and nothing more than a reasonable and effective way to protect against the spread of infectious diseases.”

In recent years, states have sought to restrict the exemptions that can be given for vaccines, as they’ve fought outbreaks of diseases like measles, long thought to have been wiped out. New Jersey would have joined five other states — California, New York, Maine, Mississippi, and West Virginia — that have all passed laws requiring that children in schools get their vaccines unless there is a pressing medical reason why they specifically cannot.

Vaccine opponents, often dismissed as an anti-science fringe movement, have fought back — and they’ve found some increasingly prominent allies. In California last year, the actress Jessica Biel controversially posed in pictures with activists fighting a pro-vaccine bill, which later passed. Biel at the time argued that the bill made it too hard for families "to make educated medical decisions for their children alongside their physicians.” In New Jersey, groups opposing the legislation — like the ultra-Orthodox group Agudath Israel of America — have found common footing with right-wing politicians.

The New Jersey Assembly Minority Leader Jon Bramnick, a Republican, opposed the legislation, saying in a debate in the legislature that it was too restrictive. “To tell a doctor that they cannot use their ability, their expertise, to write an exemption handcuffs doctors,” Bramnick said.

Vaccines aren’t a strictly left-right polarized issue, but Bramnick’s language echoes the kinds of rhetoric that has been used against Obamacare throughout the decade. Republicans often claim that progressive approaches to health care are restricting “free choice” in one way or another, even when the proposals have been endorsed by nonpartisan health advocacy groups. And if vaccines become another casualty of the culture war, expect measles to make a comeback in the Roaring 2020s.

More like this
More than 200 GOP lawmakers asked the Supreme Court to overturn Roe v. Wade
By Rafi Schwartz
Should public transit be free?
By Andy Crump
Ben and Jerry's won't sell ice cream in occupied Palestinian territories
By AJ Dellinger
Stay up to date