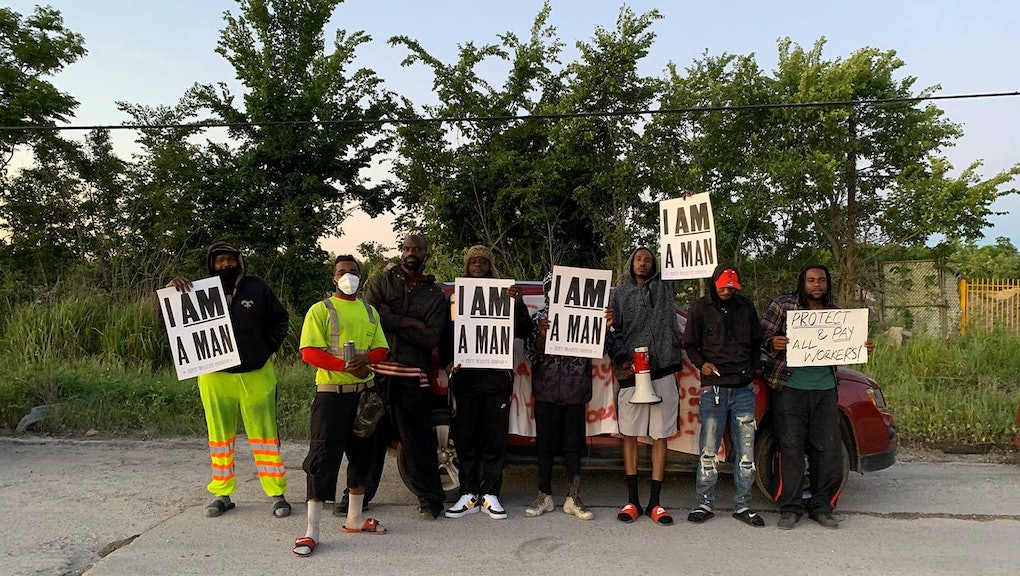 Sanitation workers in New Orleans are entering their second week of striking for personal protective equipment, higher wages, and safer working conditions. Even before the onset of the coronavirus pandemic, "hoppers" who are responsible for collecting trash dealt with low wages and poor working conditions, which they say have been exacerbated by the current situation. Hoppers provide an essential service, they say, so why aren't they being treated like essential workers?

Striking workers have four demands in particular, according to New Orleans Public Radio: "daily personal protective equipment like gloves and masks; fixing the broken trucks that leak hydraulic fluid on workers; raising wages from $10 to $15 per hour; and providing weekly hazard pay of $150." New Orleans has been hit hard by coronavirus, with nearly 7,000 cases so far.

"These men work tirelessly for hours on end to ensure [sanitation] needs are met, but they are now having to fight for fair treatment and fair pay," a GoFundMe page for the workers reads. "These men have not been provided any protective gear to guard against or combat the pandemic we are all facing."

Because the workers don't have a collective bargaining agreement and are hired through PeopleReady, which has a contract with Metro Service Group, the city's sanitation service, it might be difficult to come to an agreement. Workers said that a local manager from PeopleReady told them that they would be "replaced and fired" soon after they began striking. Democratic Mayor LaToya Cantrell said in a statement that the city's $10.7 million contract with Metro Service Group should cover personal protective equipment and "necessary items for [workers'] safety."

But PeopleReady and Metro Service Group have a different view. A statement from Metro Service Group says that the organization purchased thousands of masks and gloves, but workers say that these supplies are "first-come, first-served" and run out quickly. Metro Service Group also says that workers were not fired, that trucks are sanitized before every shift, and that employees and third-party contractors are paid a "decent living wage."

PeopleReady claimed to The Times-Picayune that workers are "welcome to come back at any time," the paper wrote. But workers say they've received a different message. Either way, Metro Service Group did apparently follow through on its pledge to replace the workers; shortly after the start of the strike, Metro Service Group hired incarcerated folks on work-release to collect trash for $9.25 an hour, The Times-Picayune reported. Incarcerated workers only get to take home 36% of that hourly pay, while 64% goes to the company that facilitates the placements. But after the company, Lock5, learned that the incarcerated individuals were caught in the middle of a dispute between sanitation workers and the city's sanitation service, it pulled out of the deal, a company manager told the paper.

It's unclear what will happen in the coming weeks, but workers are hopeful that their needs will be met. "We're out here. We're doing our job. We take pride in our work,” worker Harold Peters told local CBS affiliate WWL-TV. “Actually, we can't wait to get back to work. We just want to be compensated."

More like this
100 years after the country's largest labor war, its dark legacy still looms
By Kim Kelly
Vaccines are good. Threatening to evict someone over them is not
By Rafi Schwartz
I never want Tucker Carlson to stop talking about Nicki Minaj's cousin's friend's enormous balls
By Rafi Schwartz
Stay up to date