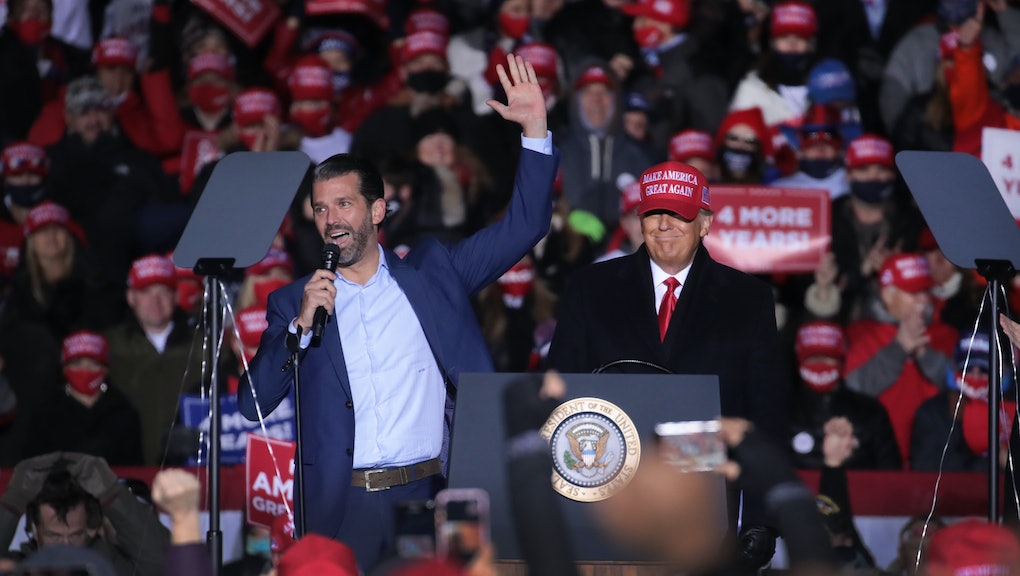 No, the 2020 election isn't officially over — the Electoral College has yet to codify the race, and even once they do, President Trump will likely continue ranting and raving about how he was cheated out of a victory, and how the election is a huge fraud, and whatever other woe-is-me conspiracies enter into his frantic little hamster wheel brain on any given day. Still, given the election is mostly all over but the shouting, it's never too early to look ahead a few years and try to divine a glimpse at what sort of hellscape the next presidential race might look like, right?

According to a newly released poll from self-described "bipartisan, full-service strategic communications firm" Seven Letter, a plurality of Republican voters say that Donald Trump is once again their pick to run for the White House in 2024. Perhaps unsurprisingly, Vice President Mike Pence narrowly trails his current boss as the second most popular choice for the GOP in four years. Incredibly, however, the third place choice for the next Republican standard bearer is virtual tie between onetime presidential candidate-turned-MAGA sycophant Sen. Ted Cruz (Texas), and Donald Trump Jr., the silver-spooned scion of his father's sprawling empire who has never held elected office (or really any job that didn't already have his family name on it) in his life.

If nothing else, the polling data — culled from 1,500 people nationwide in mid-November — shows just how inextricably bound the Trump family has become with the Republican Party as a whole. And while it is much too early to see this poll as anything other than a nebulous glimpse at the overall mood of the American right, rather than hard, actionable data, it comes just as both president and first son Trump have begun to make national headlines for their possible futures.

Already the president has intimated that he may run again in 2024, going so far as to reportedly float the idea of announcing his next campaign during Joe Biden's inauguration. Trump Jr., meanwhile, has allegedly — albeit debatably — been named as a possible savior for the beleaguered National Rifle Association, as his close allies are "looking for a franchise for Trump Jr." to plant his own locus of power within the conservative ecosystem.

Other potential GOP nominees named in the survey include Trump Jr.'s sister Ivanka, Florida Sen. Marco Rubio, and Fox News host Tucker Carlson, although none of them currently have the substantive margins of support enjoyed by Trump, Pence, and Trump Jr.